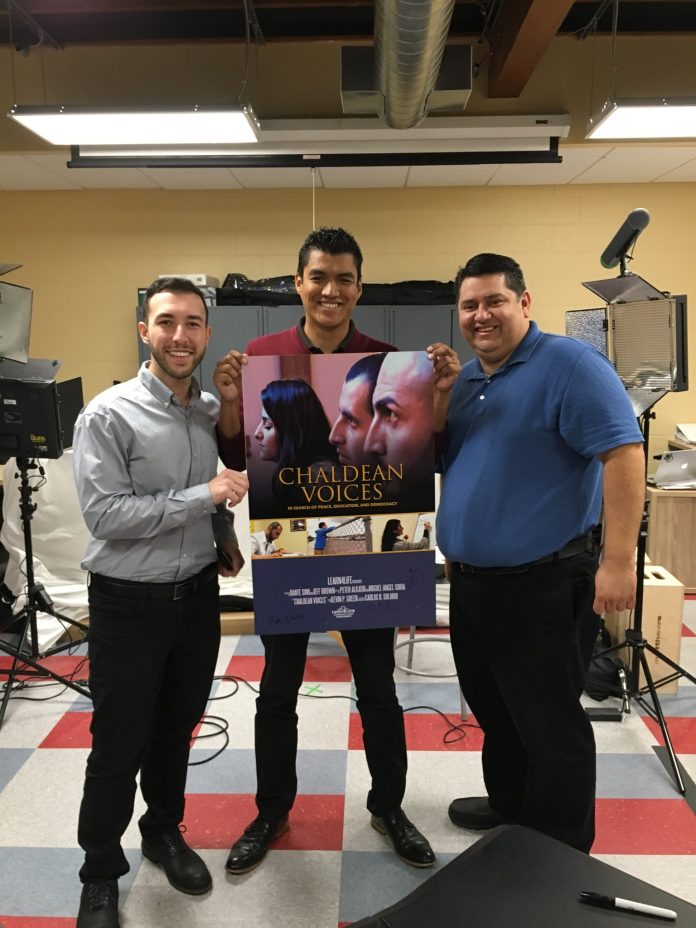 “We have something special here and we need to start sharing these stories.”

This was the start of a conversation Peter Alkatib (21) had in September 2014. It would eventually lead to a film that would earn the San Diego Film Award for Best Feature Documentary Film in 2015.

PLNU’s Career Services Program Manager Alkatib’s debut in the world of filmmaking came when he and colleague Miguel Angel Soria noticed there was a large Chaldean American population at the charter school where they worked who were underrepresented in the surrounding community media.

“Our students [at Learn4Life] had realized that El Cajon celebrated a German American month but that the Chaldean American population didn’t receive any recognition despite making up a vast majority of the community,” said Alkatib.

Chaldean Americans refers to a population of immigrants from Iraq to the United States whose history dates back nearly 5,000 years. They’re Aramaic-speaking members of Eastern Rite Catholics who maintain their own Bishops and Patriarch but still hold communion with the Pope in the Vatican. Many fled their native country due to the constant unrest and religious persecution and have settled in areas of San Diego like El Cajon.

“Many of our students are coming to us brand new to this country, older in age but with a fifth or sixth grade reading level,” said Alkatib, who’s also a first-generation Chaldean American and first-generation college student.

“We knew with the Chaldean population around us that this [film] was the opportunity to showcase and truly help these students,” Alkatib said.

In the year following that initial conversation in 2014, Alkatib, his coworker and co-producer Soria, and their cameraman Carlos Solorio interviewed six Chaldean American students from their charter school Learn4Life.

“We wanted to show that while these students often come in with low test scores, they have the determination and resilience to succeed,” said Alkatib. “Their parents have sacrificed a lot for them to be here.”

We wanted to show that while these students often come in with low test scores, they have the determination and resilience to succeed.

In the film, Alkatib, Soria, and Solorio follow the stories of six students, visiting their homes for interviews and asking questions about their experiences as immigrants in the El Cajon community.

“The film really expands from there. From the story of the immigrant to more on the opportunity,” said Alkatib. “We really wanted to empower the students to take civic action in regards to their representation in the El Cajon community.”

The students then met with the mayor of El Cajon to learn about the process of adding a Chaldean American month to the city calendar. The film parallels the students’ individual stories while following the process they went through to get their month added.

“Chaldean American month is now recognized,” said Alkatib. “And it was so cool to see all of the students go through that experience. All of them have now graduated and are doing so well.”

Many keep in touch with Alkatib who in the years following, discovered he wanted to continue his education as well. Alkatib applied and was accepted to PLNU’s MBA program in 2020.

“My entrepreneur mindset really developed while I was in business school,” said Alkatib, whose dad and brother-in-law both own their own businesses.

Finishing a secondary degree during the COVID-19 pandemic, however, left Alkatib with a desire to build more connections at PLNU.

“That was the one thing that a lot of people go to business school for is the connections,” said Alkatib. “We all felt like we missed out on some of those due to the pandemic.”

So when a position as a career services program manager opened up at Point Loma Nazarene University, Alkatib applied and was hired in 2021.

“I love what I’m doing,” said Alkatib. “I totally see a connection between my MBA and the community.”

Alkatib has been able to apply much of what he learned in his graduate program to conversations with former charter school students and even his own family members since graduating with his degree. Beyond his Chaldean American community, he also sees application in his current role at Loma.

“I could definitely see myself growing in this department and with the university,” said Alkatib. “It really speaks to who I am and what I’m passionate about.”

I could definitely see myself growing in this department and with the university. It really speaks to who I am and what I’m passionated about.

As he grows within the Office of Career Services, Alkatib hopes to return to serving his Chaldean American community on a more regular basis.

“Because of the MBA I had to say no to a lot of people I was involved with,” said Alkatib. “It was a temporary pause and I’d like to get back to exploring more opportunities there.”