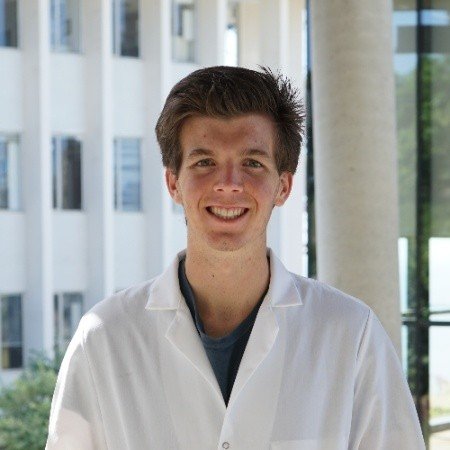 In the midst of a confusing and troublesome year, PLNU alumnus Jacob Mitchell has found a rewarding occupation fulfilling an important need — developing effective and affordable COVID-19 tests. Mitchell, who graduated from PLNU in 2019, became a Lab Technician with Abbott Laboratories in August 2020.

While Abbott typically develops medical devices, nutritional products, and pharmaceuticals, it has recently refocused many of its resources and efforts to develop COVID-19 tests on a grand scale. Mitchell’s new position is not only an important role with the company, but an excellent step in his career.

This opportunity didn’t come to Mitchell right away, however. Unable to find work related to his Bachelor of Science Degree in chemistry after graduation, Mitchell initially found work at Alta Ski Resort in Utah. Having to live up on a mountain with neither skiing experience nor an automobile was very intimidating at first. He spent his first few days at the lodge wondering if he had made a mistake.

“Anyone who knows me will tell you I’m not a big lifetime planner.” Mitchell observed. “I don’t think about big decisions too long — I make them decisively and get stressed about it after.”

Yet, as the days went by, Mitchell decided to make the most of his new position. Without many other ways to spend his free time, he took to the slopes.

“I finally let myself enjoy the situation instead of being opposed to it,” he said. “Plus, I went from not knowing how to ski to becoming an excellent skier.”

Before long, Mitchell’s impressive attitude of optimism and perseverance was put to the test. As the Coronavirus stormed the country in April, Alta Ski Resort closed and Mitchell lost his job. After an uplifting backpacking trip, Mitchell began to apply to what he called “an absurd amount of jobs.”

As chance would have it, Abbott labs needed new hires immediately in response to the Coronavirus and the rapidly growing need for quickly-manufacturable tests. Abbott had the facilities and resources to develop them, and answered the call.

As Mitchell tells it, less than a week passed between the phone interview his first day on the job. After less than a month, he was already running his entire section of the lab.

“Times are tough,” he said. “It’s a fast-paced work place. You’ve gotta keep up; you’ve gotta be ready for it.”

Mitchell works as a production technician in the buffer lab, a division that creates the buffer — a stable pH environment to test for the COVID-19 reaction. He explained that this is a very important step in production because the buffer is necessary for so many different steps of creating COVID-19 tests.

“I make the media — or rather, food — for the bacteria,” he explained. “If you are what you eat, then I make 100% of what actually tests for COVID. So that’s fun to think about.”

“Times are tough,” he said. “It’s a fast-paced work place. You’ve gotta keep up; you’ve gotta be ready for it.”

Abbott produces a variety of tests, but each can be categorized into one of three categories: molecular tests, like the ID Now tests in many physicians’ offices; antigen tests, like the Binax Now, which is the only at-home COVID-19 test; and antibody tests, like the ARCHITECT platform. Mitchell explained that Abbott has attempted to make as many different types of tests as it can, but each relies on the protein base his team creates in the buffer lab to react with COVID-19.

The antibody test has drawn some criticism for being occasionally inaccurate, and could potentially produce a false-negative if your body hasn’t yet developed antibodies for the virus.

“It’s definitely a less excellent way of testing,” Mitchell said, “but it’s better to be ‘good’ and quick than ‘excellent’ and slow.”

Mitchell explained his is an ideal starting position, being exposed to all sorts of different labs, and getting involved in each step of Abbott’s manufacturing process.

Looking back on his time at PLNU, Mitchell said he’s thankful to the chemistry department for helping him to feel comfortable and confident entering into a job in that field.

“I think the biggest benefit [from PLNU] was just being in the lab,” he said. “The first day at Abbott, I showed up, and people were just continually impressed by what I already knew and already had my experience with. I didn’t feel unprepared in the slightest.”

He did mention, however, that there was a key difference between the classroom and the job, specifically regarding the large scale at which Abbott has produced tests.

“When I was doing chemistry class, we were measuring out milligrams like little grains of sand,” Mitchell said, cracking a smile. “And now it’s like, ‘You’re going to put 20 kilograms of salt in this 200-meter barrel.’ You should see how much salt we use.”

“This is the best job I’ve ever had,” Mitchell finishes. “It’s so fun. The fact that I feel important to this process keeps me engaged. It’s purposeful work — I’m not just going there to get a paycheck.”

This work isn’t for everyone. It takes a special disposition to be able to handle such a fast-moving environment. For Mitchell, the craziness and uncertainty drives him forward. Whether on a snowy mountain or in a laboratory helping create COVID-19 tests, he embraces his situation and thrives under the pressure.