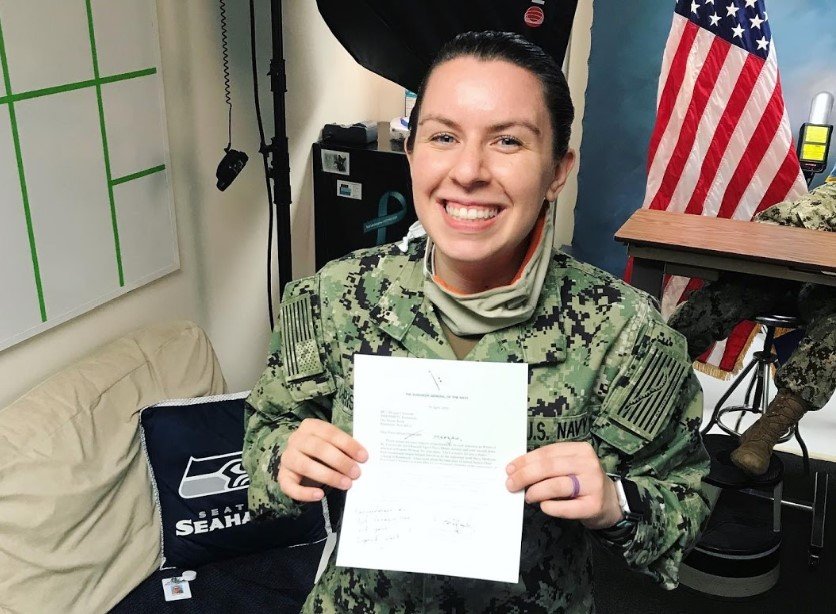 Meagan Christoph (14) knew she wanted adventure after graduating from PLNU with a B.A. in Journalism.

She found her calling through the United States Navy where she currently works as a mass communication specialist (MC) and was most recently awarded the Thomas Jefferson Military Writer of the Year in a competition that put her up against individuals from each of the branches within the Department of Defense.

Christoph was given the news that she was the year’s military writer through a phone call with Rear Admiral Charles Brown and said it took her completely by surprise. Initially, her leadership put the stories she had written into a competition for the Russell Egnor Navy Writer of the Year. After winning the title of Navy writer for 2019, she was entered into a competition against the best writers of that year from the other branches. After having only served two years in the Navy, Christoph had not anticipated either of these victories and explains, “I expected someone with more experience to win but I was humbled because I just did my job, I just wrote stories.”

Still, she insists she cannot take full credit for the titles she has earned: “I couldn’t have done it without the sailors and civilians who had stories for me to tell.”

Of the stories her leadership had submitted on her behalf, there is one she remains fond of. “Once a Sailor Always a Sailor,” shares the story of a retired Navy veteran who came back to the hospital where Christoph works so he could spend his final days with his Navy family. She discovered how the lives she was writing about were able to teach her so much. This one in particular showed how the community one gains in the military is always there, even after their time in the service ends.

Christoph reflects on how the military was not something her sights were initially set on. “I was super shy when I went to Point Loma, but journalism forced me to talk to people. I liked writing, but I was scared to put myself out there.” Through her time writing for The Point, she was encouraged to find herself and take risks.

If it wasn’t for PLNU, she says, “I don’t think I would’ve had the strength to join the military.” After graduating she had spent some time trying to decide what was next for her, the challenge and adventure are what ultimately called her to serve in the Navy. Her role as an MC required a lot of additional training. She was required to attend a school which would prepare her for the various roles she could be placed in as a specialist in communication whose job it is to tell the Navy’s story.

Despite the intensity of this program, the experience she gained while in the journalism program helped to build her voice as a writer and her confidence talking with people. Her training included being put on a bus and dropped off somewhere with directions to “find a story.” Now, she says, “I’m not afraid to talk to anybody.”

It is this growth which has contributed to her passion when telling the Navy’s story. Christoph feels deeply for those she speaks with, and wants to give a voice to people who don’t usually have one. Despite the shock which followed her recognition as Military Writer of the Year, it is clear that her ability to share stories in ways which will catch people’s attention has set her apart and allowed her to make a difference within the military community.