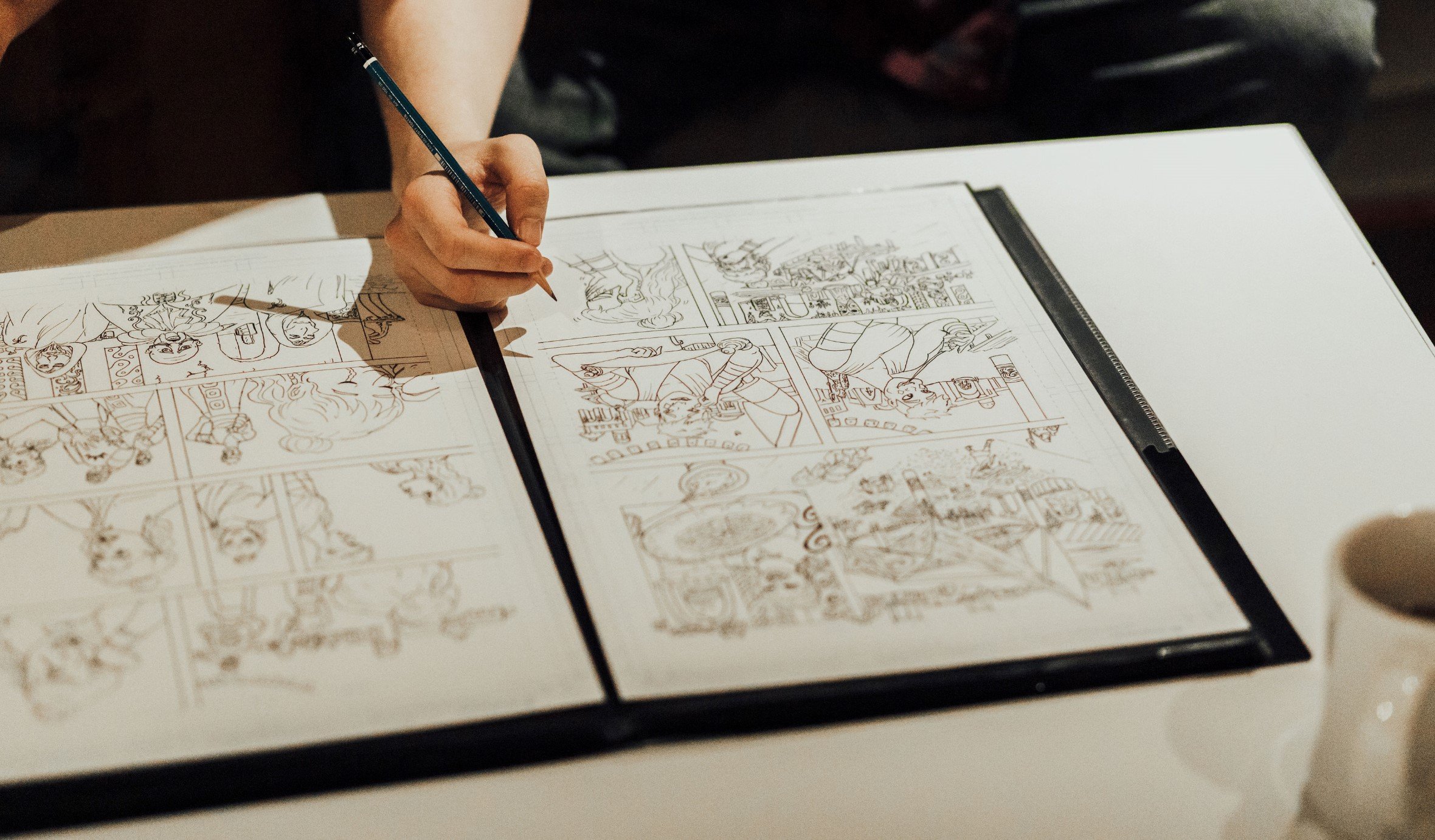 Inspired by a childhood spent watching Avatar: The Last Airbender and reading Spider-Man comics, Toby and Ricky Franklin (20) brought their love for fantasy to the world of academia, the end result being an original graphic novel entitled Mask of the Sentinels.

Toby, a writing major, was given the opportunity to participate in the honors program at Point Loma. He had initially dreaded the idea of spending any more time writing academic papers but one of his mentors, Katie Manning, Ph.D., explained that the project would allow him to pursue any topic of his choosing and create a final piece in any medium he desired.

He and his twin brother Ricky, a graphic design major, had spent their earlier years making comic books together, reimagining plots for well-known heroes but also dabbling in original characters and designs. Toby explained that a part of the honors program was the research that students had to connect to their project. He had taken world civilizations classes at Point Loma which made him want to explore the themes around imperialism within this story he was building.

This aspect of the graphic novel was something he treated with a lot of detail and respect. He understood he couldn’t speak on the experiences of colonized people, so he left pieces of the story, including the ending, open because there is no singular way to deal with its effects. He took the things he had learned in the classroom and translated them into this story which is reflective of the understandings he gained from teachers and personal research.

The brothers also put a great deal of thought into the elemental city-states featured in the story. Ricky explained how they combined the historical context they were using with influences from their lifelong enjoyment of fantasy. “Each city has its own religious beliefs, art style, and fashion … we took inspiration from many places to avoid appropriation while still creating believable societies. The background for each city came from no less than two different cultures.”

Once he had a direction for where he wanted to go with the storyline, Toby wrote a full script which laid out each page for his brother to draw. Ricky would get this guidance then turn the words into art, laying out every panel in pencil and ink before scanning the paper to color digitally. “I like to think I imagined the world and Ricky created it,” Toby said of the concept they developed. “We had the same feelings about it.”

The faculty who mentored them had given the option to shorten the graphic novel as it was such a huge undertaking but the brothers wanted to stick to their original goals. This collaboration was being completed while they each wrapped up their last semesters in college, over a period of 10 months. “We collectively put well over 1,500 hours into this project,” Ricky said. “The vision and scope we had in the beginning are what we stuck to.” He also elaborated on how this helped him to really find his creative edge: “I used to call myself a designer but now I also consider myself an artist. Our project is multidisciplinary; it’s a work of art and literature.”

After they had finalized their graphic novel they sent it to ComiXology, a digital distribution platform for comics. Anyone is able to submit their completed work to the company but the review process typically takes time and many creators get their books sent back for edits initially. This was not the case for the Franklin brothers who were approved within five days and able to launch Mask of the Sentinels within a month.

Eventually, they will be self-publishing a limited number of print copies and are looking forward to that. In the meantime, the brothers reflect on all they were able to learn about this creative process while working together to develop a final product which they are both unmistakingly proud of.