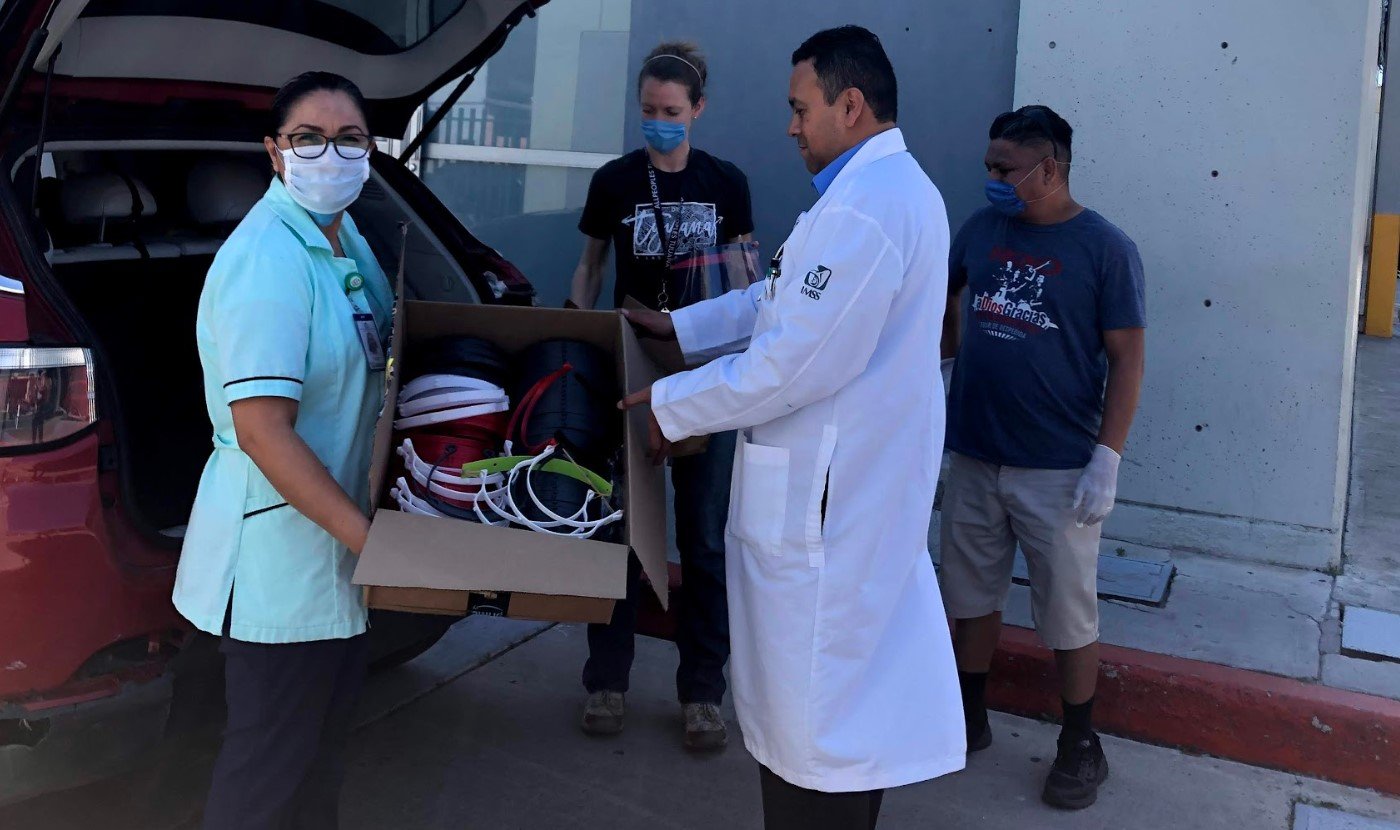 What started as an experiment in trying to design personal protective equipment (PPE) for a few people quickly turned into a humanitarian effort that brought PLNU community members together to supply 650 face shields and counting for healthcare workers in Mexico across nine hospitals and clinics.

September 22, 2020 Update: It is with heavy hearts that we share the sad news of the passing of our friend and faculty colleague, Dr. Ryan Botts, who passed away from sudden cardiac arrest related to a rare heart condition that had affected him the last two years. Ryan and his wife Nikki were both teaching from home. Dr. Botts collapsed at the end of a meeting with a student and Nikki, who was teaching in another room, was able to be with him. We grieve this tragic and untimely loss of our friend and join together in prayer and support for Nikki, the immediate family, and the entire extended PLNU family.

Ryan Botts, Ph.D., was a professor in the Department of Mathematical, Information & Computer Sciences (MICS) at Point Loma and initiated this PPE project somewhat unintentionally. A nurse who lives in his neighborhood had explained that her hospital had faced a shortage in PPE when the outbreak of COVID-19 first began. Botts knew that PLNU’s 3D printers might be able to help and were available since classes were being taught virtually due to the pandemic. He decided to experiment with plans he found online to try and help.

By the time he had reached back out, the local hospitals had recovered from the shortage. He deliberated with professors from the MICS department, and it occurred to them that if the hospitals here struggled to provide adequate PPE initially, our neighbors across the border might still be impacted.

Botts and his department made it their mission to help with the PPE shortage.

Botts and his colleagues reached out to alumna Rachel Hudlow (11) who works with the All People’s Church in Tijuana as well as Campus Pastor Liliana Reza, who leads PLNU’s Ministry With Mexico, to assess the needs of the communities across the border. Botts thought they would initially supply 30 to 40 face shields in total but came to learn that there were two hospitals and a field clinic in the process of being set up in Tijuana, all of which had some need for PPE. The goal of the MICS department at this point turned to making upwards of 450 masks.

Botts was able to get around 46 shields done a day, assuming there are no problems with the equipment. Initially, this project was self-funded, with the other professors in the department offering assistance with running the machines and buying supplies. MICS students also stepped up to assist with any issues along the way as they had spent with the 3D printers and laser cutters for various projects. As the mission expanded, PLNU created a place online for people within the community to donate, and the group said the response from those wanting to help was overwhelming.

Still, they weren’t without obstacles. Prior to his passing, Botts explained how “There were lots of print failures over the first week, but we learned how to optimize [the printers] and have run them continuously.”

Reza took the first batch of 50 face shields to her contacts at the border, and Hudlow came and picked up another 100. They continued printing until every single worker at the hospital received a face shield.

Reza said, “As followers of Jesus, I believe that we are called to care for one another in real ways. When I received the email from Professor Botts, my heart was sincerely overwhelmed with gratitude and joy. In the midst of social distancing and tight U.S.-Mexican borders, we suddenly found ourselves collaborating in building bridges of compassion and hope. PLNU is a community that faithfully and creatively embodies love for [our] neighbor.”

To Botts, this undertaking was a testament to how much God can do with so little. “We’re called to love our neighbors, part of that is looking around to see what their needs are. We’re all equipped to give something, we just need to listen to what they need.”

This effort is the result of one community listening to the needs of another and giving in the ways they are able. What started out with Botts questioning “what do I have to offer” quickly turned into a demonstration of unity and strength despite the fear and anxiety present during this time.

The Faithful Pursuit of Happiness

Puzzling the Mysteries of the Universe: P.A. Trisha Jansma Puts the Pieces Together