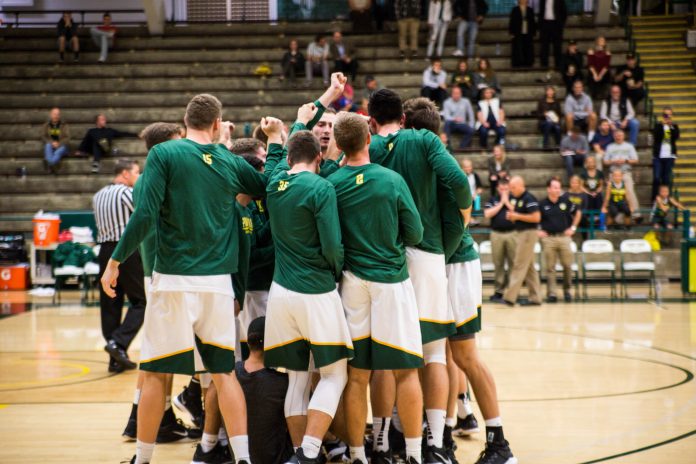 Ryan Looney, the new head coach of the PLNU men’s basketball team, knows firsthand the impact a coach can have on the lives of his players. Looking back on his time as a high school player, with a coach he describes as “extremely hard on him and his teammates,” Looney now appreciates the discipline and work ethic instilled in him at a young age. That experience continues to inspire him to push his own players and offer accountability on and off the court. He conducts regular one-on-one meetings with his players, holds them to high academic standards, and demands excellent time management skills, and also makes sure that each of those aspects affect playing time—an approach he hopes yields fruit far beyond the end of the season.

“My goal for every team is for each player to be more well-rounded when he leaves—academically, athletically, and spiritually,” said Looney. “I want all my players to have a thorough understanding of the value of hard work and how that can impact all areas of their lives. Regardless of what career path they choose or whether they become a husband or father, that work ethic will serve them well.”

In fact, it was this focus on developing well-rounded students that made Looney stand out as a candidate for his position. Caye Smith, PLNU’s vice president for student development, commented on Looney’s commitment to developing the “whole student.”

“After a rigorous search for PLNU’s next men’s basketball coach, Ryan Looney emerged as our clear choice based on his deep commitment to God, his demonstrated coaching skills, and his desire to help his team develop into men of the highest Christian character,” she said.

The work ethic he strives to instill has proven successful, as he’s taken his last nine teams to national tournaments and earned three conference champion titles. But more than the accolades, Looney looks back most fondly on the press conferences following those tournaments, where players reflected on the challenges, growth, and personal victories they achieved over the season. For Looney, it’s these moments that outweigh the many challenges of his job, such as enduring a demanding schedule, constant travel, and the longest season in collegiate athletics.

Of course these challenges are nothing new to Looney. He began his first coaching position as a graduate assistant at the University of Wisconsin-La Crosse, where he earned his masters in athletic administration. Following his time there, he accepted the head coaching position at his undergraduate alma mater, Eastern Oregon University, before moving to his previous position as head coach at Seattle Pacific University. During his seven-year tenure at SPU, he took his team to three consecutive tournament championships, earned the title Great Northwest Athletic Conference Coach of the Year twice, and accumulated the best winning percentage in school history. While Looney is grateful for this record of success, it’s the wellbeing of his players, more than the wins and losses, that dictates his coaching philosophy.

“My coaching style is first and foremost relationship-based,” Looney said. “It all starts with developing a relationship and a high level of trust. Everything else is derived from that.”

Looney hopes to establish this relational mindset from day one, kicking off the semester with team-building exercises in what he calls the basketball Olympics, and continuing throughout the season with activities such as retreats, team meals, and intercultural experiences. Though these methods of fostering team unity have served Looney well over the years, he also recognizes that each team offers its own dynamics and each player a unique disposition.

“The players change from year to year, which means that the way I approach them changes each year,” Looney said. “They all come in with different backgrounds and personalities and at different points in their spiritual walks. This is where my faith really intersects with my coaching, helping me stay grounded as I navigate tough conversations and stressful situations.”

Though each season is different, Looney works to ensure that one thing remains constant: friendship among his players. A spirit of camaraderie, he says, is of the utmost importance to building a successful team and season, and is one thing that isn’t up for debate.

“At the end of the day, even if my players disagree with each other or get angry with each other, they have to trust and respect each other—that’s non-negotiable,” he said.

Along with his personal cheering section—wife, Julianna; eight-year-old daughter, Peyton; and six-year-old son, Micah—Looney looks forward to extending his familial ties with a new team, new campus, and new community. Delving into the next season of life and basketball, Looney is excited about the future, whatever it may hold.

“I have no idea what this season will look like as far as wins and losses, but it will be a success if we have laid the foundation for the team and if players understand the culture of this program,” he said.

Looney defines the program’s culture by a core set of values, focusing on teamwork, effort, accountability, and maturity—or TEAM, for short. In addition to establishing these overarching characteristics long term, he also understands the importance of focusing on each practice, play, and game as they come, and captures his overall goal for the team in a simple statement: “To win our next game, one possession at a time.”