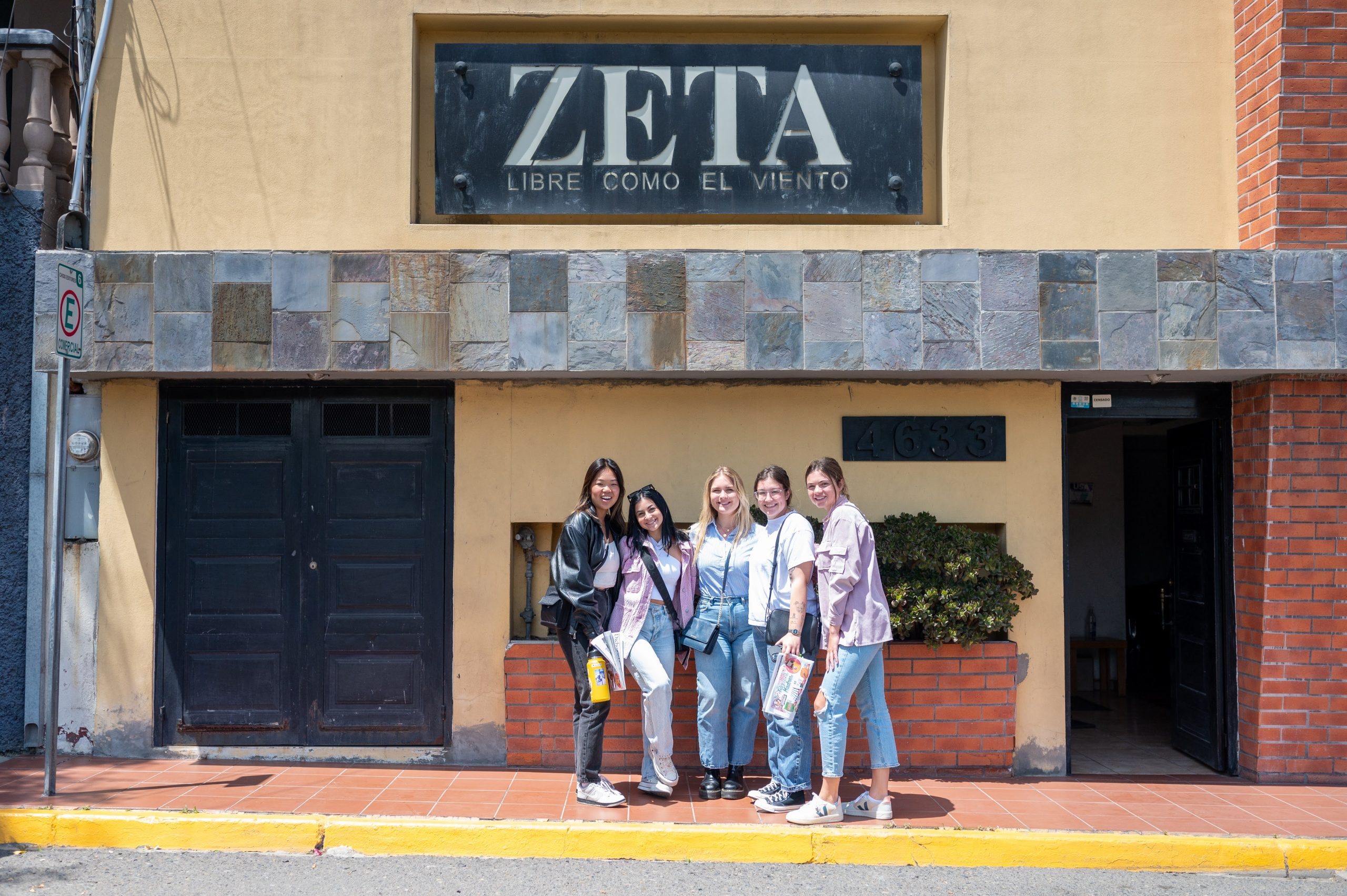 When Dean Nelson, director of Point Loma Nazarene University’s journalism department shared the news with our Advanced Reporting class in early April, we were in disbelief.

I looked around to see my classmates’ reactions: by the raised eyebrows, a passerby would have been forgiven for thinking Nelson had just announced that each student would receive free Ortiz’s tacos for the rest of the semester.

Although that would excite many PLNU students, the news that Nelson presented was tailored to this class.

Rather than taking a final in early May, Nelson asked if we would be interested in going to Tijuana for a day to tour a local newspaper. Still dumbfounded by the offer, the majority of us eagerly agreed. Going to Mexico? For a final? Count me in.

The newspaper in question was Zeta, renowned for their investigations on corruption, organized crime, and drug trafficking in Mexico’s northern states.

Nelson first became familiar with the newspaper in the early 1990’s, particularly its extensive history of dangerous and groundbreaking investigative reporting.

Considered Mexico’s leading expert on organized crime by the press, Zeta’s co-founder Jesús Blancornelas reported on the drug industry and its ties to political figures in Baja California. In 1980, he founded the newspaper alongside friend and colleague Héctor Félix Miranda. The newspaper was initially published in San Diego to avoid the requirement for all newspapers to be purchased by the Mexican government as a result of a long-standing monopoly on news publishing.

Soon after moving the paper’s headquarters to Tijuana in the early 1980’s, Blancornelas and Miranda faced threats from the Mexican government and crime circuits for their exposures on internal corruption. In 1988, Miranda was murdered by gunmen connected to politician Jorge Hank Rhon, and in 1997, Blancornelas survived an assasination attempt after publishing a story on the Tijuana Cartel.

A part of the Society of Professional Journalists, Nelson attended an event following the 2012 release of the Zeta documentary film “Reportero.” There, he met Zeta’s current general director Adela Navarro Bello, who was listed among the fifty most powerful women in Forbes Mexico for her investigative work in 2014. They discussed the possibility of bringing PLNU journalism students to their main office.

“I did not know if [Zeta] would be open to it given the murders of journalists in Mexico,” Nelson said.

Since 2016, with the exception of 2020 and 2021 due to the COVID-19 pandemic, Nelson has seen the same excitement that caused the raised eyebrows of this year’s Advanced Reporting class when proposing the trip to Zeta’s office in Tijuana. The excitement only grew as the trip was being organized.

“Once I saw how receptive the staff was to our students and how our students came alive with this trip, it solidified [to me] that we should do this on a regular basis,” Nelson said.

Every year, there have been a number of students who see the trip as too risky, and therefore decide not to go. Respecting their concerns, Nelson makes the trip optional.

Whether or not students decide to attend the trip, his class watches Reportero to get an understanding of Zeta’s investigative journalism, and their ongoing dedication to keeping others accountable.

“Those were traits that I would love to pass on to our students. A passion for storytelling, accountability, and truth telling.”

“Those were traits that I would love to pass on to our students,” Nelson said. “A passion for storytelling, accountability, and truth telling.”

Students who do attend are expected to do external research on the magazine and to prepare questions for the Zeta staff.

“It was such an honor to have Dean trust us enough to go and prepare questions because I know how much he respects Adela and Zeta,” Corcoran said. “The staff’s straightforwardness about the violence they’ve witnessed reflected what they said in the documentary.”

On a sunny morning in early May, Nelson, PLNU Spanish professors Paula Cronovich and Scott Bennett, and ten students met at the university, then carpooled to the Old Town train station.

Going across the border, the border patrol officer looked surprised when Nelson told him that our reasoning for visitation was to tour Zeta, no doubt unaccustomed to groups of American college students visiting the oft-threatened organization.

From there, we took our first steps into Tijuana.

We split into groups based on our Spanish proficiency, which ranged from broken middle-school Spanglish to full fluency, and hopped into taxis that would take us to Zeta’s office.

Nelson, Corcoran, a fellow classmate, and I rode together. Excitedly peering out the windows, my classmates and I exclaimed how this trip already made us feel like real journalists.

“It was so cool to hear from a female who is not involved in soft news. As someone who wants to become an international correspondent, it was awesome because she is doing exactly what I want to do.”

Around 10 a.m., we arrived at the Zeta office: a yellow two-story building designed with small exterior windows for safety and security. There, we met our classmate and Tecate local, third-year multimedia journalism and media communications major Mario Borrayo Ramos.

Arriving before the rest of the group, Borrayo Ramos was offered tea from the receptionist, taking him aback.

“Even though they have a lot of recognition, they are very grounded,” Borrayo Ramos said.

The group was then introduced to Ceasar René Blanco, Jesús Blancornelas’s son and Zeta’s co-editor. Moments later, Zeta’s editor in chief Rosario Mosso Castro and Navarro Bello arrived with a stack of Zeta’s most recent print for us to take home.

“There is the stereotype that women in journalism do [entertainment and lifestyle] news,” Corcoran said. “It was so cool to hear from a female who is not involved in soft news. As someone who wants to become an international correspondent, it was awesome because she is doing exactly what I want to do.”

The investigative journalists then shared the history of Zeta and its mission. Cronovich and Bennett aided with translations.

The paper has continued to receive threats in response to their investigations. More recently, Mexico’s current president Andrés Manuel López Obrado has targeted independent journalists who have denounced his administration, amplifying comminations towards investigative journalists. This contradicts his stance with the media while he was running for office.

With their personal lives affected, the reporters have been assigned protective units from the Mexican government, both in their homes and at work after said threats.

Yet in spite of this ongoing risk, sources continue to come forward, because they know that their identities will be protected and that Zeta is dedicated to telling their stories in search of the truth.

“If we can prove it, we publish,” Navarro Bello said.

A note that stood out to me most during their presentation was, “Base your work on people. Not the government. The way that people thank us is by saying that they trust Zeta.”

After the presentation, we were brought downstairs to the office’s lounge, displayed with a portrait of Jesús Blancornelas, awards, and acclaimed editions of the newspaper.

Reflecting on the impact of the trip, Nelson says that he comes inspired every time he takes students.

“I think [the trip] is a way to honor the people at ZETA. It puts our own issues in perspective,” Nelson said. “One of my goals is for it to help us whine less and to appreciate the freedoms that we have in this country.”

Story by Katie Morris
Katie Morris is a student at PLNU studying psychology and journalism. She’s currently an editor at The Point, PLNU’s student newspaper.