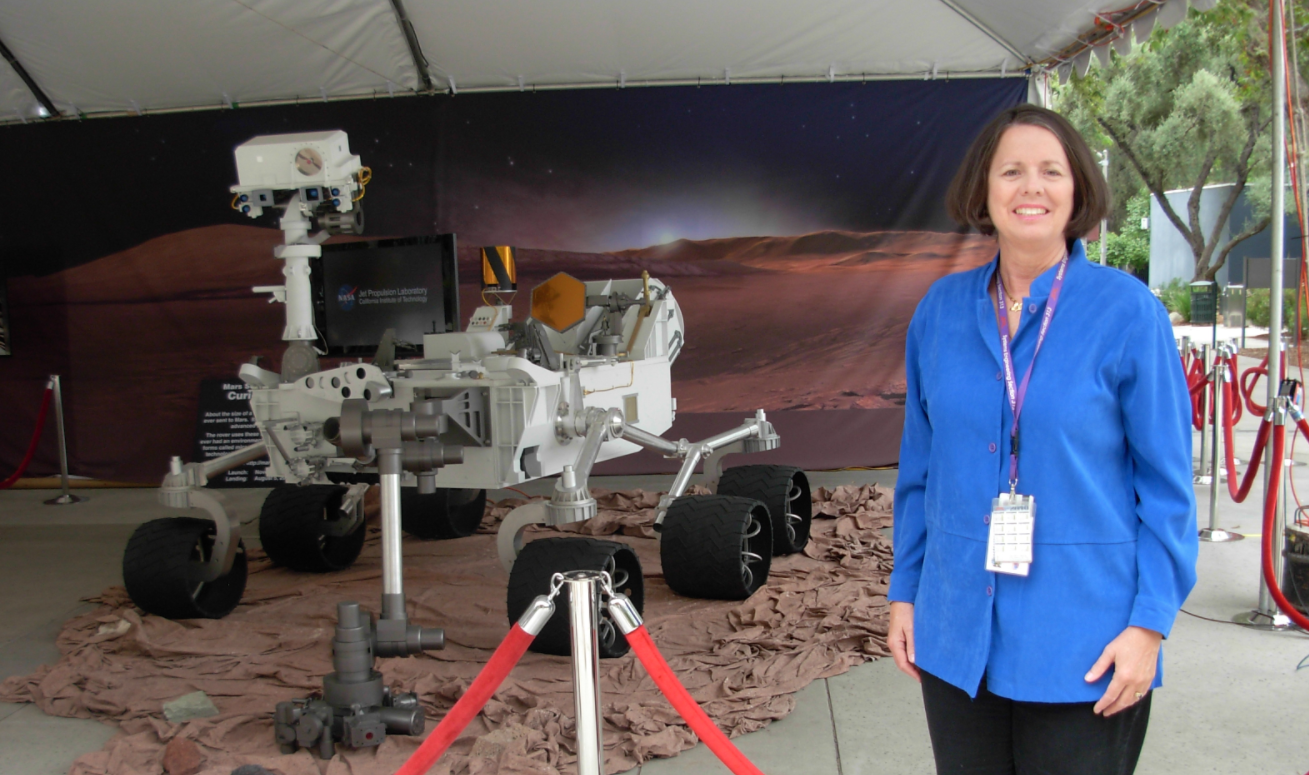 Exploring the far reaches of space requires teams of people and complex processes. This is the work of NASA’s Jet Propulsion Laboratory (JPL) in Pasadena, California. P. A. “Trisha” Jansma (’72) has put her technical and people skills to work in a 49-year career with JPL that has spanned diverse roles and projects.

In addition to her B.A. in mathematics from PLNU, which she completed along with minors in Spanish and psychology, Jansma has two master’s degrees – an M.S. in computer science from USC and an Executive MBA from Claremont Graduate University. She has worked in five of the seven technical divisions of JPL and contributed at the agency level to systems engineering across NASA. Her roles have been in systems engineering, software engineering, and enterprise-level re-engineering. The breadth of Jansma’s experience is uncommon, and it has helped keep her interest and motivation high as she has continually been able to learn new things, work with new teams, and contribute in new ways.

“JPL is the NASA center for unmanned exploration of the universe. We design and build spacecraft and instruments and conduct science experiments based on the data from those instruments,” Jansma explained. “We collect data and analyze it. We do planetary science, astrophysics, and earth science missions.” She has worked on all three types of missions. Jansma received a NASA Exceptional Service Medal for her work as the Implementation Manager for the Planetary Data System Version 1. She has also received numerous NASA Group Achievement Awards for her work on various projects and tasks.

She currently works in implementation, serving as the End-to-End Information System (EEIS) Engineer and Project Software Systems Engineer for the SPHEREx Project. SPHEREx is an astrophysics mission that explores the origin of the universe and the origin and evolution of galaxies. She also performs those same roles on the Near Earth Object Surveyor Project, another astrophysics mission that looks for potentially hazardous objects which could impact the Earth.

She explained: “In my work, I look across the entire project: the instrument(s), the spacecraft, the ground data system, and the science data system. It’s important because they all have to work well together.” Each piece of the system for a particular project needs to send data that can be read by the next part. For example, considerations need to be made regarding data volume and bandwidth.

Jansma pointed out the importance of teams in her work. “We do together as a team what no one person could do on their own,” she said. “There are subject matter experts in each discipline – instruments, spacecraft, mission system and ground data system, and science data systems. As the EEIS engineer, I look across the various systems, but I have to utilize the expertise of many other people.”

Whether Jansma is working on a Project Software Management Plan or a Flight-Ground Interface Control Document, she collects input from many different people in an iterative process in order to create the best results. “Looking at systems tends to be more people oriented,” she said. “I enjoy that much more because I enjoy the people component in addition to the technical component.”

Jansma has used her ability “to look across systems” in both engineering and business roles at JPL and NASA. Shortly after she completed her EMBA, JPL was going through a significant change management process redesigning and replacing their business systems. JPL management wanted someone from the engineering and technical side to be part of it, and Jansma was chosen because of her expertise in both business and engineering. Her role in enterprise re-engineering was, she said, the most complicated she’s had since it involved finance, services administration, asset management, acquisition and human resources, and many large software components. A few years later, she undertook a part-time role with NASA doing systems engineering and process improvement, which took her to all 10 NASA centers. These were rare and broadening experiences that Jansma viewed as a way of giving back to JPL. “Most people on the engineering side haven’t worked on the business side, and most people on the engineering side haven’t worked across the agency,” she said.

Going where others have not has been part of Jansma’s experience from the beginning, however. When she began her career decades ago, she was one of very few women in the engineering field. When she answered a shared phone, people often assumed she was a secretary. “They couldn’t even imagine that I was an engineer,” she said. “Even now, women are in the minority in most meetings. However, precisely because I am a woman, I see things differently and can make a contribution because I am not thinking like everybody else.” Though she didn’t necessarily set out to be a role model, Jansma has helped pave the way for others. “Sometimes it helps that there were people who came before you,” she said.

Within engineering at JPL, there are formulation roles – generating proposals for new work – and implementation roles – designing and developing systems. Jansma has done both. For most of her career, she has been involved in implementation, but about seven years ago, she decided to learn formulation and became a proposal manager for the first time. By NASA standards, the proposal was small – $35 million for an Earth science mission with two CubeSat satellites making radiometric measurements of the Earth’s atmosphere. Proposals typically have only a 5-10% chance of being selected. In Jansma’s case, her first try was a success – the proposal was selected and the project is now in implementation. She then went on to work on larger, more complex proposals in the $500M to $750M price range. Jansma finds each new role and project invigorating.

“My career path has been unusual and atypical” she said. “I like variety and breadth; I like learning new things … The software, the instruments, the spacecraft, the ground data systems – I like seeing across all that. I am what’s called a ‘Connector.’ I see what’s happening from A to B to C and how they impact each other… That’s what I like, the opportunity to contribute at various levels and to do new and different things.”

Jansma has put all of her degrees and interests to work – including her teaching credential, which she earned post-college when she planned to become a high school math teacher. She has used her teaching skills at JPL to design and teach software management classes and to develop case studies for systems engineering workshops. Also, she has taught 18-week Bible overview classes at her church. “Nothing is wasted in the Lord’s economy,” she said.

“I am what’s called a ‘Connector.’ I see what’s happening from A to B to C and how they impact each other… That’s what I like, the opportunity to contribute at various levels and to do new and different things.”

Jansma’s story truly is one of God’s provision and healing love. For many years, she didn’t often share with others that she had grown up in foster homes. But now, she realizes that her past is part of what has shaped her. As a teenager, she was separated from her sister for the first time and placed in a foster home in another city that was later deemed unfit. That trauma caused her to cling to the Lord and draw closer to Him. Her church, pastor, and congregation were a source of support. Even though only 3% of foster children graduate from college, Jansma’s straight-As earned her a full-tuition scholarship to PLNU. Then JPL paid for both of her master’s degrees. These tremendous blessings have led her to prioritize giving back to today’s students. After going through a healing process through Cleansing Stream Ministry regarding her past, she is more willing to share her story to help others.

Jansma’s ability to see the big picture – her very real, daily awareness of the limitless reaches of time and space – has inspired in her a deeper passion to attribute that big picture to the Creator God and to give Him praise. “As the Andre Crouch song says,” she explained, “‘All that I am or ever hope to be, I owe it all to Thee. To God be the glory, to God be the glory for the things He has done.’” Her resilient spirit, analytical mind, and dedicated service have all been used by God to bless not only JPL but also all who know her.

P. A. “Trisha” Jansma (’72) is a recipient of PLNU’s Distinguished Achievement Award for 2021. To learn more, please visit pointloma.edu/Homecoming.

The Faithful Pursuit of Happiness