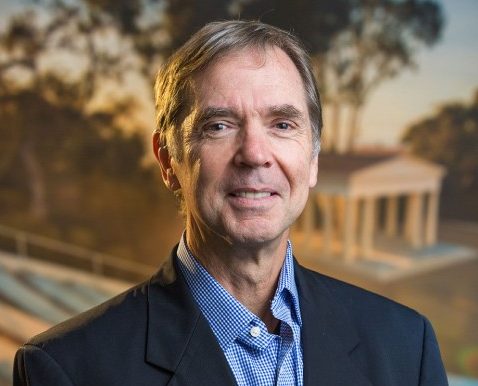 Dr. Dean Nelson, founder and director of the PLNU journalism program, has hosted the Writer’s Symposium by the Sea since its beginning in 1995. In celebration of the symposium’s upcoming 20th anniversary and the current anniversary of Nelson’s 30th year on campus, we caught up with him to learn more about the significance of both milestones.

Q: What brought you to PLNU and has kept you here all this time?

A: I was hired in 1984 to start the journalism program, but my wife and I didn’t plan on staying for more than a couple of years. The Literature Department needed someone to get it going, and now the department is called Literature, Journalism & Modern Languages. Students who get accepted into journalism schools all over the country come here because of the quality of education they know they’ll get; the attention we’ll give them; the professional contacts we will share with them; and the fact that we will know them by their names, love them, and complicate their thinking. It became very easy to dig my well here.

Q: You played a key role in the creation and development of the Writer’s Symposium. How did it first begin?

A: The symposium began with the idea that our students could benefit from hearing directly from the many great journalists and other kinds of professional writers in town. We started it as a one-day thing, with several writers coming in and giving talks about what they did. There was great interaction with the students, and it was very inspiring. Then we broadened it. I asked local crime writer Joseph Wambaugh to come, and instead of giving a talk about writing, he preferred me to ask him questions. I owe a great deal to Joe, because the interview format is one of the signatures of our symposium. We got UCSDTV to broadcast that interview, and they’ve been our partners in the symposium ever since. More than two million people have downloaded Writer’s Symposium interviews.

Q: What were some of your favorite moments out of all of the interviews? Most thought provoking? Funniest? Most surprising?

A: There have been so many great moments. I completely lost control of the interview with Ray Bradbury, which made it even better. He went off on some rant and the crowd loved it. Having Anchee Min end her interview with a song from a Chinese Opera was thrilling. Having the audience give Bill Moyers a standing ovation while the interview was still going was pretty cool. Garrison Keillor’s writing workshop with our writing students was something they’ll never forget … and Billy Collins’ poetry workshop with our students … and Paul Farmer’s private audience with our science students. Those experiences mark you. You’re just better after experiencing something like this. The interview with Christopher Buckley was one of the funniest I have ever experienced. The one with Rob Bell was one of the deepest. Michael Eric Dyson’s was one of the most challenging, because he was so hard to keep up with. The one with Chris Hedges was one of the most inspiring because he challenges our assumptions about everything, and yet believes love is the greatest force in the world.

Q: If you could pick one, which interview would you say has influenced you the most personally?

A: All of the writers have influenced me in one way or another. One of the most gratifying interviews personally was the one with George Plimpton, one of the founding editors of the Paris Review of Literature, and the only person to interview Ernest Hemingway. He planted the seed in my head about what is called participatory journalism. For his book Paper Lion, which I read in high school, he got the Detroit Lions football team to let him participate in their training camp as a quarterback and even take some snaps in a pre-season game. It influenced me to do several things like that in my own journalism career. One magazine had me do a monthly column just based on this kind of participatory journalism. Having him on campus was such a thrill. Unfortunately, he died a few months after—which brings up the matter of celebrating these great writers while they are still with us. For those who have died, we were able to acknowledge their gifts at our Writer’s Symposium.

Q: After 20 years, why is the Writer’s Symposium still such a significant aspect of PLNU?

A: Storytelling is at the heart of the human experience. We learn our values, our worldview, our history, our theology, everything, through story. Some of the most beautiful words in any language are “Tell me a story.” Kids don’t say to their parents, “Tell me some data,” or “Tell me some information.” We have always craved stories. So to bring in some of our culture’s greatest storytellers to talk to our students and talk to the broader writing community in San Diego about language and story, well, I think it’s one of the most important things I can do on this campus. Our students then are encouraged and inspired to go be better storytellers. I like to think that our journalism and writing programs at PLNU are training the culture’s next generation of storytellers. Having them rub up against this kind of greatness (figuratively speaking) can only raise the bar. It’s a way for us to tell our students, “See how great writing can move the human heart? See the power of a well-told story?” Since we have the symposium at PLNU, I think the broader community realizes that great writing is happening here, and prospective students know we expect a lot of them.

God’s Grace and the Gift of the Literary Arts

The ABCs of Developing Successful Readers