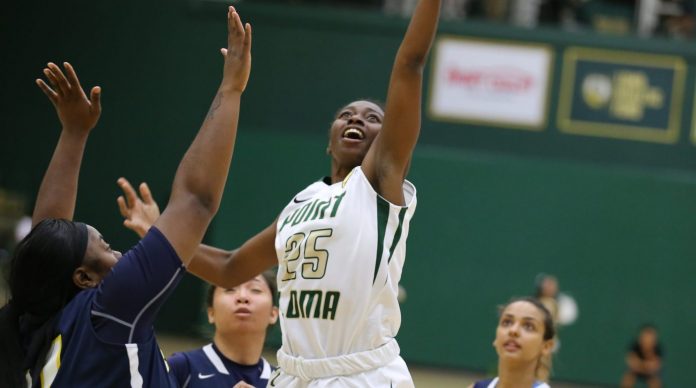 Lisa Faulkner exudes confidence when it comes to basketball and player development. Coming off her fourth season as Boston College’s assistant coach, PLNU’s new head coach for women’s basketball seems as enthused as ever about becoming part of the community, developing the team, and planning on winning the PacWest Championship. Below is an excerpt from a 30-minute question-and-answer session with the Viewpoint.

Q: Tell me how you got started in coaching
A: When I was a senior at Vanguard University, I connected with a player, Tiari Goold, who was transferring out of BYU. I played high school basketball with her and I mentioned that she should come play at Vanguard. She said “I will, but only if you stay on and coach.” That got me thinking, and it didn’t sound like a bad idea. When I approached my coach, Russ Davis, about it for advice, he wanted me to remain in the game. So I did.

Q: How did you come to PLNU?
A: As a coach, I have always admired the program from afar. A few years ago, I started to be intentional about becoming a head coach. I asked myself, where would I want to be? PLNU was always at the top of that list. I wanted to be in a Christian environment. PLNU is in the PacWest, a tremendous conference. Academically, it is a great school, and it is in the best location you could possibly ask for.

Q: What was your first meeting with the PLNU women’s basketball team like?
A: I came to PLNU at the end of this spring semester and finished out the last two and a half weeks. I had workouts and meetings with the players, and got the ball rolling.

We spent time laying down the foundation of what we want our program
to look like, and things that I stand for and what I want our team to stand for. It has been great. The players are hungry to get pushed to the next level. They are committed to doing their best in this upcoming season, to win the PacWest championship and compete on a national level.

Q: What kind of values do you want to instill in the team?
A: I see it as my job to push them to be the best versions of themselves. In some of
our first team meetings, we talked about being competitive in everything we do —
in practices, drills, individual workouts, and especially in games. I want them to be competitive within those circumstances, but with each other, too. That means being committed to always improving and being all in for each other. Every team member needs to know that everyone’s role on the team is not the same, but they are all valued and needed. Being the best versions of themselves is also about serving each other, the PLNU community, and of course, Christ.

Q: Why do you think competitiveness and service are essential for a team?
A: Competitiveness, for me, is a driving force. It’s not even necessarily about beating teams; it is about giving your best in all circumstances, and that is really what I want to teach. Focusing on service is important also because when we’re serving, it is not about us. There’s no one person who’s bigger than the team, and there’s no one person bigger than the program. And when you are a part of a team, you have to sacrifice something.