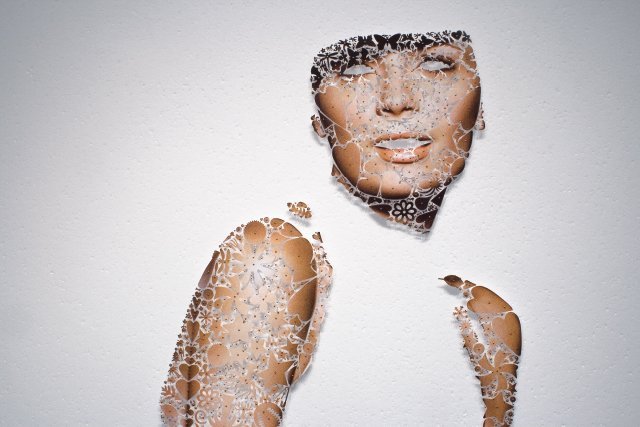 In November, PLNU art professor David Adey was featured in a solo exhibition entitled “I’ve got a river of life flowing out of me” at Luis De Jesus Seminal Projects Gallery in San Diego. For most of the works in the show, Adey took advertising images featuring celebrity models from fashion magazines and bus shelters and chopped them to bits with his extensive collection of craft punches normally used to decorate the pages of scrapbooks. Then, with the help of his studio assistant, PLNU senior art student Jenna Morrow, whose work is funded by a PLNU Research and Special Projects Grant, all of the flesh-toned pieces were perfectly reassembled and pinned into place onto white foam board. Carefully and evenly suspended several millimeters away from the foam, the two-dimensional photograph comes eerily back into the third dimension. Since only the flesh-toned image remains, open mouth, clothing, and eyes become negative space, odd hollow voids. The effect is creepy, unsettling. In one large piece, “Misha Barton for Bebe,” the model’s arms are oddly cut up by the missing brand name logo ‘bebe’ superimposed in the original image over her flesh.

The art itself is so strange, so beautiful, and so complicated – and none of that by chance. In all of these masterminded arresting elements, Adey is grabbing our attention and inviting us to stay and think awhile, even to dig into the perspectives he presents. He seems to keenly understand that while there are many things we can learn and know, perhaps most importantly we must learn how to soberly look at ourselves and our society and begin to ask better questions about who we are.

As an artist and an educator, Adey seeks to critique society and stir up philosophical and faith conversations. Adey says, “I feel that it is my moral obligation as a believer and as an artist to address cultural issues from a position of faith. Every piece of art that I have made for the past 10 years has been made from a Christian perspective.” And yet, glancing at his work without engaging in conversation with its multifaceted deeper meanings, a viewer might just miss the Christian perspective altogether.

While Adey is a Christian and an artist, he is not a traditional ‘Christian artist’ in the sense that his work does not portray or reinterpret Bible stories or explicitly call people to faith in Christ. Rather, his body of artwork deftly draws on themes that are familiar to the Christian tradition. There are sometimes sheep. There are nearly always elements of death and resurrection in the mix. As Adey’s recent exhibition has received critical acclaim, more than one art critic has picked up on these themes, which are less than apparent at first glance. Kevin Freitas is an art critic for San Diego City Beat Magazine:

“Using ordinary craft punches, Adey pilfers today’s fashion magazines and dissects hundreds of flesh tone shapes from the celebrities and models displayed within their glossy pages and then resurrects the victims in works that are simply astounding in their complexity of design and simplicity of idea and construction. Each punched shape is pinned – crucified – like some entomological collection to a Styrofoam background and turned into some of the most sensual and sublime collages ever produced.”

These Christian references: crucifixion, fashion models as somehow willing victims of oppression, and Adey’s pinning technique as a kind of resurrection are not used flippantly in the artwork nor in Freitas’ critique and are not at all intended as a mockery of faith. Instead, they bring a powerful critique when brought to bear on our fame-obsessed society.

While fashion is a valid art form, what does it mean about our society that a person becomes distinctly more valuable and desirable with airbrushed makeup, windblown hair, and a seductive pose? Are famous models like Barton exploited for commercial gain through conspicuous consumption? If sex is used to sell us a ‘body- conscious’ brand of clothes, should we be buying? Whatever your take on the issue, Adey is craftily posing the question.

San Diego Union-Tribune art critic Robert Pincus has his take: “Isn’t there something disturbing, [Adey] suggests, about the way our culture is fixated on flesh and youth? There’s a dark side to glamour: Making celebrities grander than ourselves, we’re fascinated by their rise, but just as intrigued with their fall. Making them larger-than-life, we also dehumanize them.”

Adey says about naming his pieces, “I’m drawn to the ironic, sacrificial nature of the titles “Misha Barton for Bebe” and “Rebecca Romjin for Bebe,” which come directly from the ads. Just like the real Misha Barton is sacrificed for Bebe, Misha the photograph is sacrificed to make the art.”

Adey has stripped the image down to portray only the model’s exposed flesh, perhaps in an effort to restore her humanity (certainly something more sacred and meaningful than the clothes or the jewelry Bebe is selling). He’s taken the two-dimensional image and tried to bring it back to something three- dimensional, more real, more alive again. Obviously it’s a parody, it doesn’t fully work – but again, it succeeds where it make us think about our culture.

Adey says, “The damage has been done, a woman has been reduced to a two-dimensional dead representation of a person. The work is an exercise in futility. [By] extruding the image back into space, it can’t become real again, but it can become a strange and beautiful creation.”

Still, what’s evident in his resurrection parodies is that David Adey, in all his wild creativity, or any human artist for that matter, cannot improve upon the original work. What he can, and does, do is make us think.