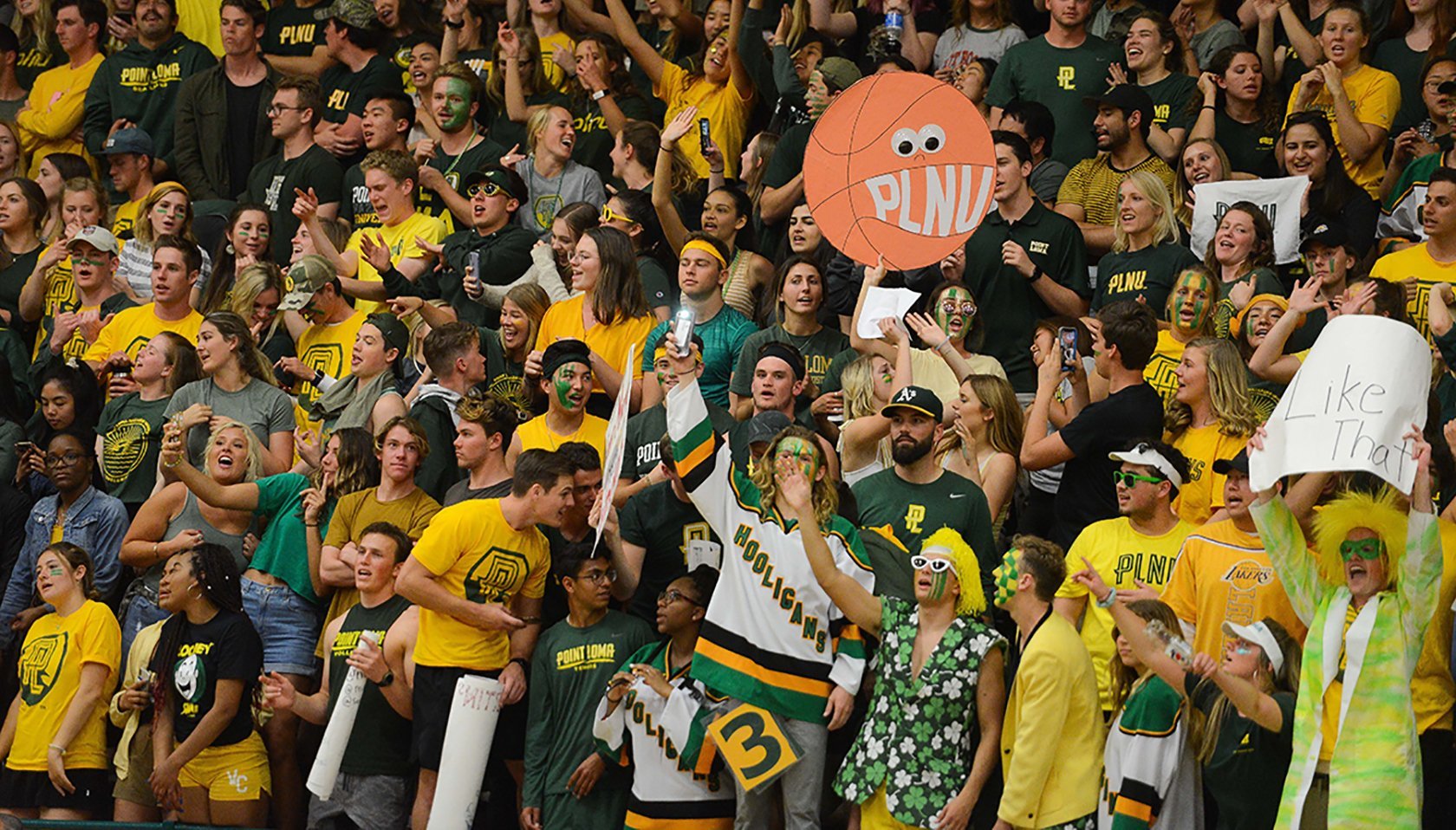 Home Topics Voices of PLNU Ready for More: The Historic Run That Was Just the Beginning

One of my coworkers went to Duke. All college basketball season, I had to hear him talk about personal anecdotes of camping outside in the snow for days to gain entrance to an iconic Cameron Indoor Stadium basketball game. Repping my PLNU hoodie, I’d roll my eyes.

OK, PLNU is no Duke, but my go-to comeback is that there’s nothing to do in North Carolina. They really didn’t have a choice. When the sunny SoCal weather was nice on our game days, I already knew the attendance numbers would dwindle. Students could go out and do… absolutely anything. And if the weather wasn’t nice — say, rain — no one left their sweet dorms based on the fear of the ferocious droplets.

But, this basketball season, something changed — and it wasn’t the weather. I was witnessing a rise in Loma sports pride. Pictures of this season’s men’s basketball team celebrating win after win seemed to flood my timeline throughout the year. That’s when it truly clicked for me: Oh, this team is good, good.

“We tried purposefully to schedule a lot of home games,” head coach Ryan Looney said about this season. “When the season had started, we may have had a couple hundred people at a game. And then we kept winning, and kept winning, and you could sense that not only the campus itself, but people in the community starting to come more and more.” But, he said, the real buzz started when No. 1 regional ranked PLNU was selected to host the first three rounds of the West Regionals of the NCAA tournament in mid-March. He continued, “I mean, I find it hard to believe there’s ever been a day where the campus has been [as] electric as those three days were. We had sell-out crowds, and people lined up outside.” Take that, Cameron Crazies!

But, this basketball season, something changed—and it wasn’t the weather. I was witnessing a rise in Loma sports pride.

For the tournament, everyone chose to see a basketball game while the sun was shining outside. I replayed a couple of those Instagram stories a few times back to be certain that was my old Golden Gym about to burst its seams; my school repping that green and gold as if it was going out of style; my fellow Sea Lions screaming so loud that I had to mash the volume down on my phone fearful my speakers would blow. Usually, this would be a once-per-year Homecoming game deal, but this was February and March, and the students were still showing up! Watch parties in the cafeteria and the ARC on tournament away games! Silence during free throws — virtually! School spirit! It was like a campus sports revival. Wow, this is cool.

Leading up to the tournament, the senior ASB director of school spirit, John Bunnell, told me that the Green Sea was prepared to show up and show out in the student section. Acai bowls, Phil’s BBQ, and pizza boxes were continuously making their rounds before and during regular season games to build the hype and get the most people there as possible (life hack: if you want college students to go anywhere, feed them). Plus, during the West Regionals, he had planned different themed nights like Whiteout, Blackout, and Green and Gold Rush.

At the last game Point Loma hosted, I had never seen the gym so packed with students, faculty, staff, alumni, and the community. It was by far one the best experiences I have had at Point Loma

“At the last game Point Loma hosted, I had never seen the gym so packed with students, faculty, staff, alumni, and the community. It was by far one the best experiences I have had at Point Loma,” Bunnell said. “Personally, throughout those couple weeks of hosting the tournament and watching the team play on the big screen in the Caf, there was a buzz and excitement on campus I had never experienced before.”

“I have not seen anything like it in my 18 years here as a student, coach, or administrator,” echoed athletic director Ethan Hamilton. “It has truly been special.”

It’s been special alright. With a final record of 31-5, the Sea Lions match the most wins in PLNU men’s basketball history since the 1952-53 squad. Their 14-game win streak in PacWest play propelled them to finishing first, earning the conference title, and grabbing the conference tournament championship win. It’s the program’s first PacWest title and the first men’s sport conference title since upgrading to NCAA DII in 2014-15.

Related Article: Corey Costelloe looks back on the growth of basketball at PLNU and reflects on his own journey covering them as a student reporter.

And yet this season wasn’t a surprise for third-year head coach Looney. He knew this team was special dating back to last season’s record-breaking crew. Making the program’s first appearance in the NCAA West Regional and earning the then best-ever fourth PacWest finish, 2017-18 had been the Sea Lion’s best. Those records were shattered this year. When October came and Looney was able to (in Bill Raftery’s voice) “get those puppies organized,” it started to make sense. “Once we got into our fall workouts and you could see the overall talent together on the floor,” Looney said, “we had a pretty good indication from the start that we’d have a good year.”

Point Loma was a special place for a lot of different reasons: we’re located right on the beach in Southern California; it’s a place where you can get a fantastic Christian education. So our job was to build a basketball program that mirrored the first two things

Looney really spoke it into existence; he crafted, dreamt up a vision for this program. “Point Loma was a special place for a lot of different reasons: we’re located right on the beach in Southern California; it’s a place where you can get a fantastic Christian education. So our job was to build a basketball program that mirrored the first two things,” he said. “Continually being able to communicate that message and also reinforcing it through the recruiting process, developing extremely strong relationships with all these guys, they took a leap of faith, and came [to Point Loma], and believed in the culture we were trying to sell.”

One of those players that believed was transfer Daulton Hommes. Maybe you’ve heard of him? The 6’8” junior star, who averaged 21.9 points and 5.8 rebounds per game while shooting 47.0 percent from 3, won PacWest Player of the Year and NABC DII Player of the Year. NBA scouts heavily sought him out, and now he’s trying his luck in the 2019 NBA draft. The kid can ball.

With him, five seniors, key role players, and a whole lot of heart, they made it all the way — further than Duke this year, I might add. On the day of the national championship game, I woke up feeling like it was game day for me, too. I fired up the CBS stream on my laptop with fingers crossed, as my LA apartment’s wifi can’t always be trusted. They made it, and it kind of felt like we all made it. Every former student-athlete, every student who cheered, every staff member who came out to support Loma basketball; that game, on that big stage, at the biggest dance of them all, it felt like we were one united front. There were twenty-five watch parties scheduled in twelve states to root for this team. Wearing my Loma Nike-checked gear in solidarity, I was proud. And I still am. Fans even made the trip to Middle America, carrying supportive signage, sporting face paint, yellow wigs, and foam lions-of-the-sea paws — hey, even Bobby B. got into it with a festive green pull-over sweater! “Defense” chants reverberated throughout the arena—our presence was felt. The final score didn’t lean in our favor that day, and those 3s didn’t get the friendly bounce, but you know what? We’re still proud. Yeah, an “L” may show up in the box score, but for PLNU sports and the campus as a whole, it’s a “W.”

“Obviously not the way we wanted [the season] to end, but it was a great ballgame and you have to give credit where credit is due,” senior Preston Beverly said in the post-game press conference about the undefeated Northwest Missouri State. “[But our season is] a great legacy to leave for our younger guys on the team, and I hope they can continue it with years to follow.”

There will be a legacy that will live on a lot longer than the initial heartbreak of a tough loss. A legacy that is associated with so many firsts attached to it. The single-site record 18,870 fans at the NCAA DII Elite Eight games in Evansville, Ind., know about Sea Lion basketball now (and they probably all Googled our campus and immediately felt envious. See, we still win!). A small liberal arts school that hailed from the hills of Pasadena to bringing home hardware to the seaside of San Diego — we’ve come a long way. The best part is, we’re only getting started.

“We really hope to capture this momentum and support from the campus and community for years to come,” Hamilton added. “I think this run highlighted that our department not only has good kids who excel academically, but we are really talented athletically as well.”

A small liberal arts school that hailed from the hills of Pasadena to bringing home hardware to the seaside of San Diego—we’ve come a long way. The best part is, we’re only getting started.

The Monday after the championship game, there was a true homecoming celebration. The campus worked together to commemorate the basketball team and to show the pure delight that I’m trying to convey through these written words. In and after chapel, a last-minute planned parade ensued with the team riding down Caf Lane in decorated stake trucks. “Even though we had lost, we wanted to honor the basketball team and show them how much the students, community, faculty, and staff appreciated them and love watching their games all season,” Bunnell said. “We wanted to show them how special they are to our Point Loma community.” The PLNU commencement bell made an appearance, a DJ cranked some tunes, and the campus was adorned in perfectly hued forest green and sunset gold while students and staff rallied and celebrated the truly victorious season that had come to an end. What a run.

“Now it’s over, the message we’re trying to tell our community, and everyone on campus, is that it’s not over,” Looney said. “We’re going to keep working at this thing, and we’re just going to take a little break until the next season starts.”

So, Loma, keep cheering. Keep supporting PLNU sports, and we’ll see you next season in Golden Gym—same place, our time.