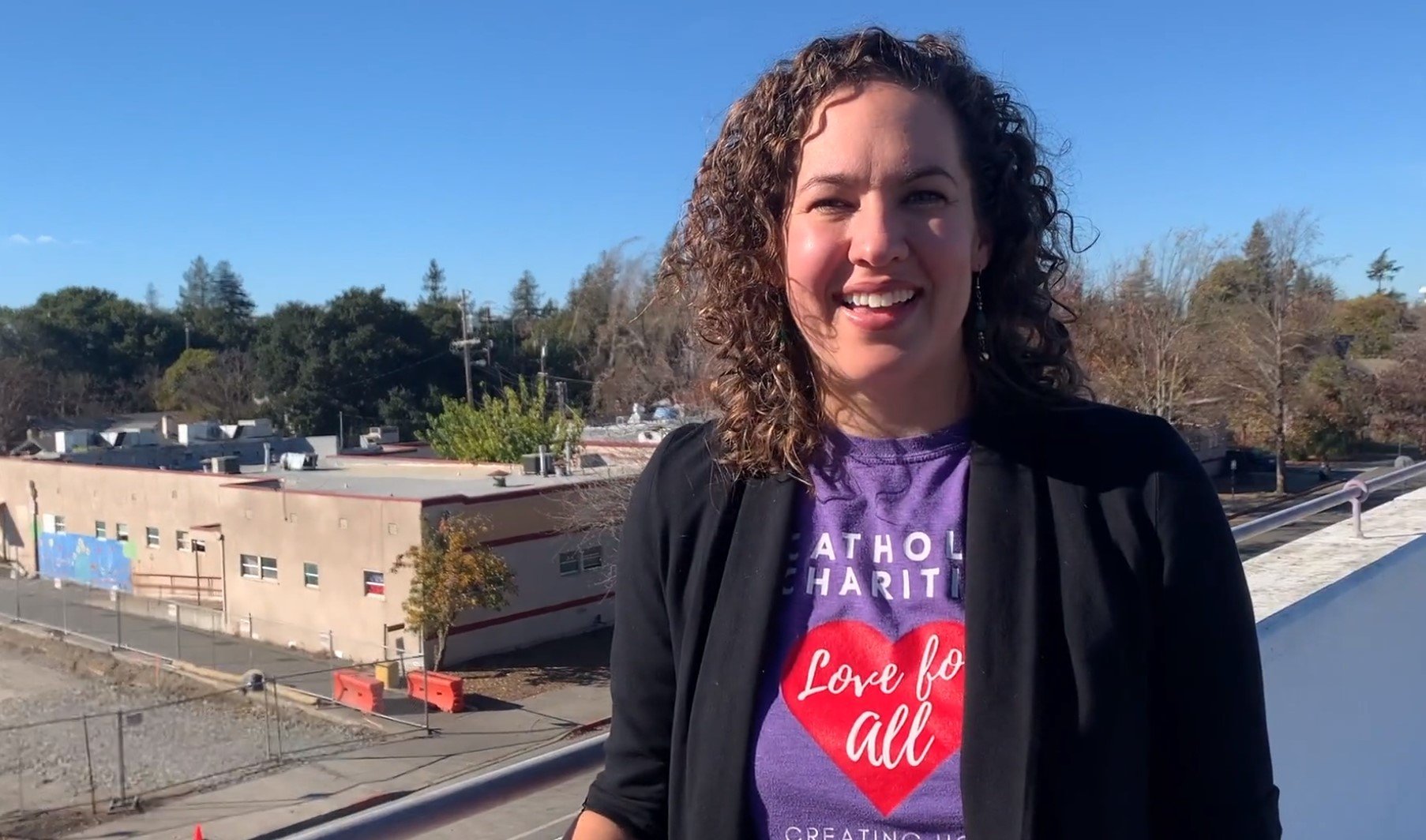 When Rebecca Kendall (07) was seven years old she lived in a homeless shelter. For a year of her life, she experienced what the nation’s staggering statistics continue to show: through skyrocketing housing costs, sequential disasters, and innumerable systemic issues, the homelessness crisis is urgent.

She acknowledges that many kids had it far worse than she did. Both her parents had post-graduate degrees, and it was situational, but the kids that she now works with daily as the chief development officer for Catholic Charities of the Diocese in Santa Rosa are dealing with generational homelessness and generational poverty.

“That very traumatic time certainly propelled me into, ‘What can I do so that children like me don’t have to ever experience that?’” Kendall said.

Catholic Charities was her second job out of PLNU after majoring in philosophy and theology. As a student, she continued to be drawn to the campus’s social justice outreach programs. It didn’t feel conscious at the time, but through her mission trips to places like New Orleans after Hurricane Katrina and the Philippines, her heart swelled for people. “My time at Point Loma absolutely solidified this sense of calling,” she said.

Through her 13 years at Catholic Charities, Kendall hasn’t seen a year like 2020. In Sonoma County, coronavirus cases ran high and wildfires raged, ripping Northern California apart. “The word ‘essential’ has taken on a new meaning since COVID, but when it comes to our definition, we’re literally saving lives every day because the people who are out on the streets facing extreme cold, living in the smoke—the daily realities of being unsheltered—are so life-threatening,” Kendall said. Their focus has been helping locals maintain their housing to not become homeless while also assisting people to quickly establish safe and stable housing. “We’re really focused on the poorest of the poor—people facing extreme poverty, which you wouldn’t think exists in Northern California, but it does.”

When the city of Santa Rosa and the county of Sonoma received public money to shelter the homeless who were most likely to die from coronavirus, they called Catholic Charities to assist. “We are used to being the go-to when any kind of emergency like this arises,” Kendall added. In addition to supporting homelessness, the nonprofit services people experiencing hunger, immigrants, isolated seniors—they answer the call to care for all people.

“The word ‘essential’ has taken on a new meaning since COVID, but when it comes to our definition, we’re literally saving lives every day because the people who are out on the streets facing extreme cold, living in the smoke—the daily realities of being unsheltered—are so life-threatening.”

But they can’t do it on their own. Since March, Kendall and Catholic Charities have raised over $1 million for COVID relief while also being a fundamental piece to rapidly opening hotels for the local homeless. These funds have assisted with rent, food and securing other essential needs. “As a fundraiser, I have the really unique privilege of getting to see one of the most beautiful sides of community,” Kendall said. “I get to see people, at every income level, making incredibly generous—sometimes sacrificial—gifts to take care of their neighbors, whether they know them or not.” As she bears witness to people loving their neighbors, Kendall believes that most people are true philanthropists at heart; they deeply love their brothers and sisters.

At the close of Catholic Charities’s fiscal year in June, they witnessed record-breaking fundraising totals. “People were so compelled to help financially. You’d think in the middle of a pandemic and an economic lapse that wouldn’t be the case, but it was,” Kendall says. “For me, that’s been one of the most beautiful images of community is people stepping up, even when they’re scared and even when they don’t know what the future holds, they realize there is a calling on each of us to do our part.” And that’s true within the homeless community, too.

With over 500 beds that the nonprofit runs in Sonoma County, there hasn’t been a single positive COVID test. Kendall nods to those experiencing homelessness for taking extra precautions for their peers surrounding them, and because of this, many people who previously weren’t open to accepting services in the past are now enrolling for care at these “alternative care sites,” like hotels or tent-lined parking lots. She says it has been heartwarming to see those deeply in need also taking care of one another.

The fondness for togetherness and the ability to identify its importance came from her time at PLNU, Kendall says. “It’s all about our ability to know when to ask for help and to say ‘I’m not OK,’” she said. “That is one of the hugest gifts that Point Loma has given me—creating that sense of community for a lot of people—and teaching us the value of community.”

Kendall now aims to go further. She began dreaming five years ago about creating a one-stop shop for everything a person needs to find permanent housing. This became Caritas Village in downtown Santa Rosa. It’s a family shelter, a medical clinic, a medical recuperation shelter, dignity center, and an after school program all in one city block. Plus, on the same site, they partnered with another nonprofit organization to develop 128 units of affordable housing.

“The most gratifying experience of my entire professional life has been leading this capital campaign and knowing that we’re building something that can change thousands of lives for a really long time.” The whole project—set to open in spring 2022—costs about $125 million. As CDO, Kendall has been responsible for fundraising $28 million of the total cost. To date, Kendall and her staff have raised about $26.6 million. And where has that money come from? The community.

Caritas Village has become one of the largest capital campaigns in the history of the county. In 2020 alone, the project has raised over $6 million. It will be built upon a community coming together to help end Sonoma County’s homelessness crisis, amidst their most dire time of need. Through wildfires and a global pandemic, they decided to put compassion first. The Village in the heart of downtown Santa Rosa will not only internally change someone who is experiencing homelessness—situational or generational—but it will allow them to claim something that will be theirs, for the time being. A home. An address. A safe place. A community.