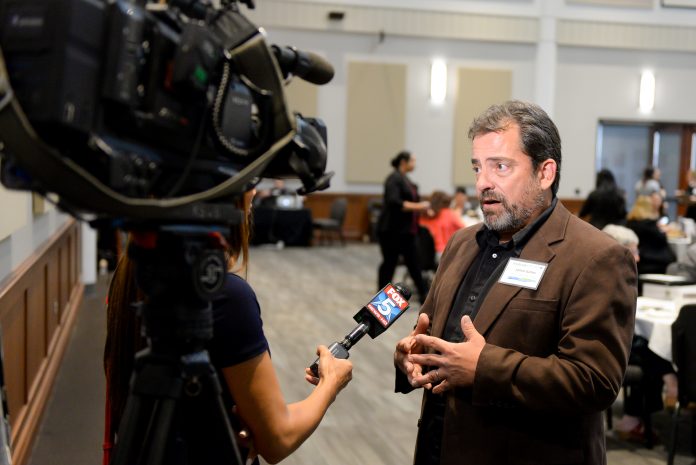 When I hear the words “research conference,” I think of poster boards filled with charts and data, PowerPoint slides full of acronyms, or abstract information with little relevance to the average person.

So I was surprised when I attended the 2018 Human Trafficking Research Conference. Stepping into the main hall, I saw more than 150 people spending their Saturday engaging in issues of trafficking.

The event was not esoteric or exclusive. Attendees came from diverse careers and walks of life. Nor was it theoretical. The people I met were passionate and involved in their communities. And while the research was certainly grounded in data, its emphasis was on telling stories of real human beings.

The conference is hosted annually by the Human Trafficking Research and Data Advisory Roundtable (HT-RADAR). Led by Jamie Gates, Ph.D., professor of cultural anthropology and director of the Center for Justice & Reconciliation (CJR) at Point Loma Nazarene University (PLNU), HT-RADAR equips local stakeholders with actionable insights. It brings to light the dark underbelly that is human trafficking.

Many people hold misconceptions about human trafficking. They envision chains and shackles in dungeons overseas. But human trafficking is as much a local problem as it is a global one. It occurs across the United States — and yes, including in San Diego. The chains are not of iron but of poverty and desperation — “conditions that make human trafficking ripe,” according to the panel of policy experts. Some are lured into the sex trade; others are tricked into labor exploitation. Both forms of trafficking rob victims of their human dignity.

Some are lured into the sex trade; others are tricked into labor exploitation. Both forms of trafficking rob victims of their human dignity.

Josh Cypert (18), a graduate from PLNU’s School of Nursing, echoed these sentiments.

“This is one of the biggest forms of injustice in the U.S. today,” he said.

Working in Rady Children’s Hospital’s adolescent psychiatry unit, he sees many patients from foster care and low-income families — as he notes, “kids susceptible to human trafficking.”

Cypert wants the hospital to implement a protocol to screen and care for trafficked victims. He also hopes that colleges will train future nurses on these issues. Progress on both fronts, however, has been slow. The hurdle, in healthcare as in the public, is that most people are unaware of the problem’s prevalence.

Related Article: An interview with Jamie Gates, Ph.D., about a three-year study examining the relationship between gangs, the community, and sex trafficking in San Diego County.

Adapting to a Changing Environment

To complicate matters, the issues evolve over time.

“Human trafficking is a business,” said Jessica Whitney, “where people are treated as inventory.”

Whitney received an award at the conference for her research on online sex trafficking ads. She holds an M.S. in Information Systems and works in the IT department for the San Diego County District Attorney.

In her research, Whitney found that traffickers use certain language and emojis (symbols) to appeal to certain buyers. They market the girls — by age, race, skin color, “new in town” (i.e. limited time only) — as a retailer positions its products. In fact, victims are often forced to write their own customized ads. The dehumanizing experience doesn’t relent.

I spoke with Whitney about her work. Besides recognizing what each emoji means, what can those fighting against trafficking learn from this?

“It’s an ever-changing environment,” she replied and cited that Backpage, which facilitated sex-buying, was taken down in April. Even prior to its shutdown, its format changed to only display phone numbers.

Part of adapting is learning how to care for survivors holistically. Due to the trauma survivors experience, anti-trafficking work doesn’t end with the rescue. For many survivors, healing is a lengthy process.

Tending to physical needs is certainly one aspect. But survivors also need emotional, spiritual, and relational healing. They need compassion without condemnation. They need job opportunities and reintegration into social life. Most of all, they need their dignity restored and their worth affirmed.

I’m reminded me of the gospel accounts of Jesus’ healings. Though many needed healing, Jesus didn’t rush interactions and move on. Instead, he took time to acknowledge each individual (Mark 5:25-34). He visited their homes (Luke 4:38-39). He laid his hands on them (Mark 8:22-25). He asked and listened to their needs (Luke 18:35-43). Jesus not only healed their physical ailments, he helped the marginalized return into society (Matthew 8:1-4). In short, he recognized their humanity when nobody else did.

“Even if I can help one person turn their life around, I’d be happy with that.”

As people of faith, we believe that God created us in His image. We were “fearfully and wonderfully made” (Psalm 139:14). We have intrinsic worth that cannot be taken away, despite the sins we’ve committed or those committed against us. And we are called to love our neighbors as ourselves. Again, trafficking is as much a local problem as it is a global one. Its victims and survivors are our neighbors.

I left the conference with mixed emotions: angered by the injustices and disheartened for the victims, yet inspired by the passion and commitment of those present. I recall a quote from Whitney:

“Even if I can help one person turn their life around, I’d be happy with that.”

Christopher K. Lee, MPH, is a freelance writer and healthcare consultant. He writes for various outlets and manages a career development blog at PurposeRedeemed.com.