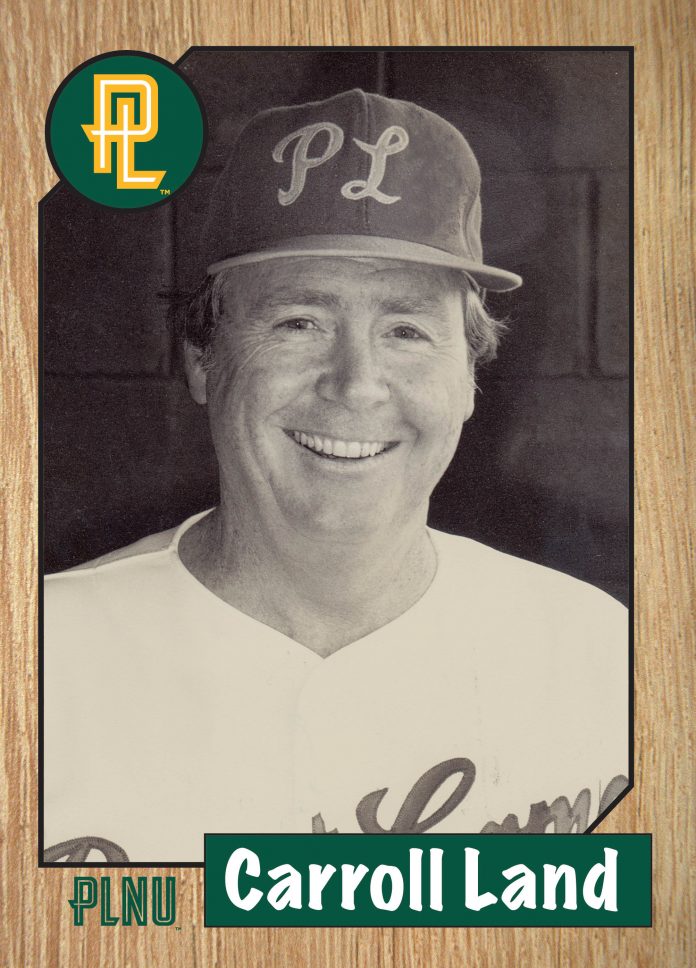 Land was connected to the university since enrolling as a freshman at Pasadena College in 1953. There are few associated with PLNU who didn’t cross paths with him. During his tenure, Land accomplished a great deal and will be remembered for many honors and achievements. However, he may be best remembered by those who were close to him for his exemplary character.

“The thing I would want people to know,” said his colleague and friend Ben Foster, Ph.D., “is that he was a dedicated, hard-working person. As a result of that kind of commitment, all of these other things came into play. Not only was he dedicated to PLNU and the kinesiology department and athletic department but also wherever he saw a need, he was going to try to meet that need.”

“I genuinely believe in all we purport to be about,” Land told the Viewpoint when he was retiring. “I truly believe Christian higher education is the greatest profession in the universe.”

I truly believe Christian higher education is the greatest profession in the universe.

After his first two years at Pasadena, Land took a pause from his education shortly after marrying his wife, Barbara. He worked and served in the Marine Corps for two years during that time. In 1959, he returned to Pasadena to complete his degree. An outstanding baseball player, Land was asked to coach the team during his final year as a student. He also served as the sports information director.

After graduating, Land added kinesiology professor to his repertoire. He also coached freshman basketball and cross country in addition to baseball. While continuing to work for the university, Land earned both his master’s and doctorate degrees from USC.

In 1965, he became chair of the physical education department, and in 1967, he was named athletic director. He continued as department chair, athletic director, and head baseball coach until 1999 when he retired from coaching. In 1973, Land was instrumental in making the university’s move to San Diego a success. In addition to scheduling and fundraising, Land put his strong carpentry skills to work improving the new facilities.

“He used his building skills,” Foster said. “A lot of the things we had early on were because Carroll had this vision and recruited students and parents to come and help.”

Land was motivated by what he saw as a great opportunity for the university and for athletics.

“I was not one who felt the ‘world was coming to an end,’” said Land. “I thought the world was opening up. Many had a hard time leaving Pasadena, mainly teachers. But the athletic department didn’t have any decent facilities so I thought coming to San Diego, with a real gymnasium, a track/football field – which we converted to soccer and a baseball field – was a huge improvement. We went from almost nothing to something. I believed the move would make us be a better, stronger athletic program.”

Land continued to lead athletic facility improvements and building projects during his tenure. Tennis courts and a soccer field were built; the track was converted from cinder to synthetic; the gymnasium was upgraded; a state-of-the- art athletic training facility was funded and built; and the baseball field was enhanced with pathways, retaining walls, fences, seating, restrooms, scoreboards, and concession stands. As a result of his tireless efforts, Carroll B. Land Stadium was named “America’s Most Scenic Ballpark” by Baseball America in 2003, and the moniker has stuck ever since. Land also helped take Sea Lion athletics to a higher level by being an advocate for women’s sports. He said that his role in establishing women’s sports championships in the NAIA brought him special joy. It also served as a model for the NCAA, which instituted women’s championships the following year.

Land also was instrumental in helping Point Loma meet the Title IX requirements for women’s sports in the late 1970s and beyond. Under his leadership, women’s sports were not only created but developed into thriving programs. All seven women’s teams under Land’s direction were ranked in the NAIA top-25 and many in the top-10. Hundreds of women earned All-American status over the years, and PLNU was home to conference, regional, and national players of the year.

In addition to serving at PLNU, Land also held leadership positions at the national level. He was president of the NAIA and American Baseball Coaches Association (ABCA), which Foster noted was quite unusual for a coach at a non-NCAA Division 1 school. He also served as NAIA District 3 chair and on the 1984 Olympic committee. In fact, because of the upgrades Land had made to the track at PLNU, the British and Italian Olympic teams were able to train on campus in order to prepare for the 1984 Olympics.

“The queen actually ate in the cafeteria and visited with our students, staff, faculty, and administration that summer,” Land told the Viewpoint when he retired.

Land’s herculean efforts earned him not only the gratitude of many at the university but numerous awards as well. He was inducted in the NAIA, ABCA, and PLNU Halls of Fame and earned the 2003 Lefty Gomez award from the ABCA – the highest honor the organization bestows. He was also named Citizen of the Year by the San Diego City Club in 1993 and received the Jerry Kendall Character in Coaching Award in 2009.

After his retirement from full-time employment at the university, Land continued to give back with special projects. He helped fundraise for athletics and for student scholarships with University Advancement. He also remained a faithful Sea Lion fan, attending games with Barbara and cheering on the student-athletes.

“I am personally thankful for Coach Land’s leadership and mentorship for so many years,” said Point Loma Athletic Director Ethan Hamilton. “Carroll’s name is synonymous with Pasadena/Point Loma athletics. He has been the foundation for everything we have built and accomplished. Even of more lasting impact is his love and care for developing student-athletes both on and off the courts, fields, and courses of athletic competition. The number of lives touched by Coach is innumerable.”

When Land retired, several of his friends and colleagues expressed how much he meant to them and the university.

“He has distinguished himself in advocating for balanced and quality educational opportunities in the areas of discipline specific didactics, general education physical activity classes, intramurals, and athletics,” said Leon Kugler, Ph.D. “At many pivotal states in the history of the university, Carroll’s skills for analysis of challenges were called upon as he served on multiple campus committees. He has been and will always be an institutional treasure.”

Ted Anderson said, “I believe that Carroll’s legacy are the principles and philosophy that he has lived out and established in our department. It’s how we look at, treat, and pray for our students and athletes. May all who come behind us find us faithful to the foundation Carroll has laid; we are standing on the shoulders of a giant.”

May all who come behind us find us faithful to the foundation Carroll has laid; we are standing on the shoulders of a giant.

Finally, Keith Pagan, Ph.D., professor emeritus and former vice president for academic affairs, said, “What an honor it is to publicly acknowledge the achievements and contributions of such a unique and honorable person as my dear friend and colleague, Dr. Carroll Land. I have observed his tenacity and resourcefulness as he worked for programmatic, curricular, and venue visions, which he articulated so well. His reputation and contributions beyond this campus and this college are not likely to be surpassed. He has brought honor and recognition to his alma mater, which became the center of his life commitment as he pursued excellence and professionalism on campus and off, here and abroad, in academics and sports, in character development and Christian commitment.”

President Brower expressed what many at PLNU feel with Land passing:
“Coach Land’s contributions to the university are so numerous it is impossible to fully express; however, key among all of them are his influences upon people – students, players, colleagues, and the broader community. Dr. Land spread his influence broadly in baseball and sports with service and innovation, but his investment in the mission and purpose of Christian higher education through PC/ PLNU established his lasting legacy of influence. The beautiful view from Carroll B. Land Stadium seems nearly limitless, and when I think of Coach Land, that limitless view of life and its possibilities seems to characterize him best. May God bless Carroll’s memory to us and motivate each of us in dedicated service to God and his purposes.”