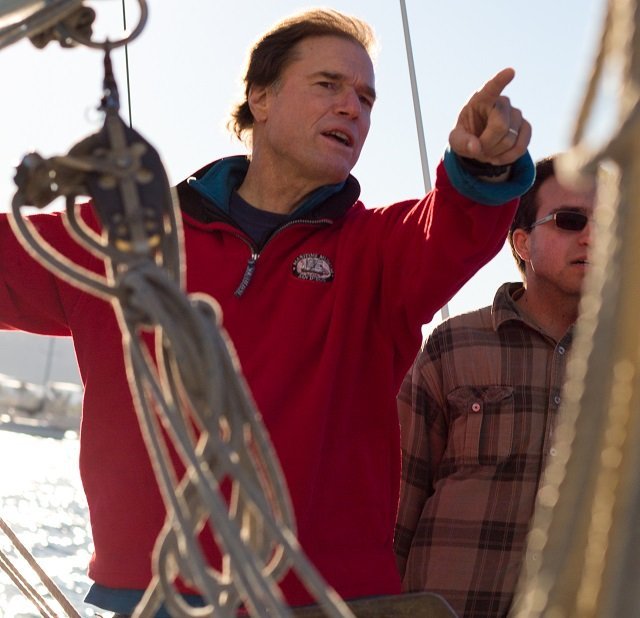 At sea off Santa Cruz Island headed toward Santa Barbara, six students and a professor are reading aloud to one another from Two Years Before the Mast by Richard Henry Dana. They are in history class, albeit a quite unconventional one.

For the past 10 years, Dr. Rick Kennedy, professor of history at PLNU, has been taking a group of six to eight students on a California history course where they also learn to sail. Passionate about both history and sailing, Kennedy calls the course “intense” and “experimental.” His students call it “beyond extraordinary.”

“Dr. Rick Kennedy, or as my fellow sailor scholars and I call him, Captain Rick, led us on a whirlwind of an adventure at sea,” recalled Kelsey Motis, who participated in the 2012 class. “It was a once in a lifetime opportunity with a professor with as much wit and enthusiasm as you have ever seen. A truly unique and fun learning experience for all of us!”

Kennedy relishes the time of close community with his students without TV and with limited cell phone use, intensely connected to nature, physically observing historical sites, and reading and singing together.

“It’s a great experiential class,” he said. “This university is tremendously supportive of such ideas. I’m very grateful for that.”

In fact, PLNU’s supportive environment is part of what’s kept him here so long. In 1995, Kennedy came from Indiana University Southeast to PLNU to teach as a visiting history professor. He intended to stay for one year, but 17 years later, he’s still here.

“I’d always wanted a Christian college job,” he said. “The environment here is ideal to engage students in discussion and close reading, and I really enjoy it. I feel blessed that I’ve spent the last two decades here.”

An intellectual historian, Kennedy is interested in the social side of history.

“I am primarily a historian of premodern liberal arts education—especially Christian forms of education, especially as these traditions appear in the 17th century,” he said. “My best books have been about textbook traditions. Pretty boring stuff, but crucial for understanding how children were taught to think over multiple generations. What a society insists should be in its textbooks indicates what society thinks is most important.”

Kennedy’s list of publications is long and diverse, including books, articles, reference works, essays, and reviews for academic, teaching, and community audiences. Two of his books for non-academic audiences are Jesus, History, and Mt. Darwin and Faith at State: A Handbook for Christians at Secular Universities. Currently, Kennedy is working on two projects dealing with Cotton Mather, who Kennedy says was “a pastor-scholar.” (Mather gave people very practical advice about matters such as child rearing, hymn singing, and Bible reading.) Eerdmans Press has contracted Kennedy for a short biography on Mather to be published in 2014, and in 2016, his volume in the 10-volume Biblia Americana series is slated for publication.

Kennedy has served his field in a number of elected and honorary positions. He spent the summer of 2012 researching as a Marc Friedlaender Fellow for the Massachusetts Historical Society. Currently, he is a member of the editorial committee of the Bulletin of the Congregational Library. He is also a member of the Colonial Society of Massachusetts.

“I spend my life studying how people think ‘Christianly,’ and Christianity is often about thinking in old ways,” he said. “Traditions are really interesting, the way we pass things on.”

As much as he is a scholar, Kennedy is also a committed teacher. He is known for challenging his students to think deeply and critically about history and important issues. He names the highlights of his career as being his students’ success stories, and his students deeply appreciate his role in their accomplishments.

“Rick is very smart and well respected among his colleagues in the professional historical community,” said Ben Cater (02), one of Kennedy’s former students, who is now an assistant professor of history at Eastern Nazarene College. “He has a good reputation for being insightful, humble, and fun. He is passionate about teaching and is a big believer in the liberal arts, which he uses to promote a rigorous evangelical mind. At PLNU, history majors, including myself, learned the complex art of historical detection, both in Rick’s classrooms as well as on his boat while sailing the San Diego harbor, on camping trips, and around his dinner table. Years later, in graduate school, Princeton-educated historian Ken Lockridge told me that Rick provided superlative historical training to his students. More recently, Rick provided me with sage counsel as I sought a job as a history professor. Over the years, my wife and kids have also become friends with Rick and his family. In sum, I am grateful that I know Rick as a model scholar, churchman, citizen, husband, and father.”

Kennedy was inspired to pursue teaching by his father, who was a community college agriculture teacher.

“I wanted to read books and coach basketball,” said Kennedy, who earned his bachelor’s, master’s, and doctorate all from the University of California, Santa Barbara.

When he is not researching, writing, or teaching, Kennedy might be found at sea.

“I have a deep love of sailing. It’s a way to commune with creation,” he said.

Kennedy also spends time serving as an elder and running the adult Sunday school program at First Presbyterian Church in San Diego. His wife, Susan, is the principal of City Tree Christian School in downtown San Diego, and they have four children.

Where the World Meets the Street