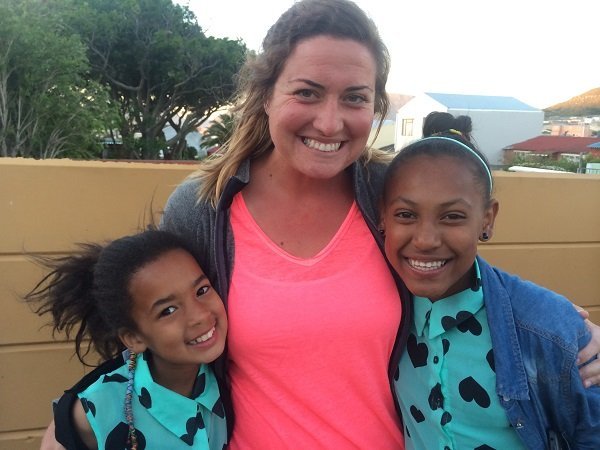 After graduating from PLNU with a degree in athletic training, Nikki Romani (10), like so many students, began her pursuit of a graduate degree. With her heart set on becoming a physical therapist, Romani found work in a local physical therapy clinic, took prerequisite courses at a community college, and sent in applications to several grad programs. As she waited for responses, she prayed that God would open the right door. Little did she know then, a door would open, but it would be far from the one she expected.

Months later, with no grad school acceptance letters, Romani found herself uncertain about the future. It wasn’t until her best friend, Rachel, told her to check into an event called the World Race that things began to change drastically.

The World Race, Romani quickly discovered, is a ministry-focused tour of the globe. Developed by the interdenominational missions organization Adventures in Missions, the World Race takes participants to 11 countries in 11 months and offers them the chance to work alongside ministries in each location.

“When I looked up the World Race, it seemed like an amazing opportunity, but I definitely had reservations,” said Romani. “I had never been away from home that long, and it meant leaving everything behind and living for 11 months off of what I could carry in a backpack. Still, I couldn’t shake the idea of going, so I applied just to see what would happen.”

Less than a week after completing a phone interview for the race, Romani was offered a spot, and the next several months quickly became a whirlwind of fundraising, training, and making preparations for the trip. Finally, in January 2014, Romani embarked on what would be one of the most memorable and eye-opening experiences of her life.

Over the next 11 months, Romani traveled with a squad of over 40 to Guatemala, Honduras, Nicaragua, Costa Rica, Thailand, Laos, Cambodia, Malaysia, the Philippines, South Africa, and Swaziland, spending a month in each place. Once in each country, the squad broke into teams of six or seven, with each team assigned to work with a particular ministry.

Throughout her travels, Romani had the chance to serve in a variety of ways: visiting the elderly in Guatemala, helping victims of sexual assault and their families in Honduras, working to rescue women from prostitution in Nicaragua, performing prayer walks in Costa Rica, working with blind and disabled communities in Malaysia, reaching out to children on the streets of Cambodia, conducting sports camps for kids in South Africa, serving in an orphanage and medical clinic in Swaziland, and much more. And while excited and moved by each ministry opportunity, Romani quickly found that each also required a bit of adapting.

“There was a transition period in the beginning of each month where I had to adjust to the new ministry, the new people, the new culture,” she said. “Part of that was because of the difficulty of saying goodbye. Every month I would form relationships and pour into people and then have to leave, knowing I probably wouldn’t see those people again. So, it was an emotional transition as much as a geographic one.”

On top of working with different ministries, Romani was also chosen as a team leader for the first four months of the race. In this role she served as the point of contact between her team of six women and the ministry representatives in each country. In addition to going over work assignments and schedules and relaying all pertinent information to her team, Romani also focused on building team unity, providing feedback and encouragement, and spending one-on-one time with each team member. In the midst of pushing her team to realize their God-given skills and talents, Romani found her own strength as a servant leader and her ability to foster open, honest community.

In month five of the trip, Romani received another honor when chosen as one of three squad leaders. Leaving her team, she switched her focus from working as a ministry liaison to caring for the overall well-being of the 43-person squad. Equipped with support from her fellow squad leaders and alumni squad leaders from previous trips, Romani dove into the role. With increased responsibility — such as assigning teams to ministries; visiting and working with different teams; checking in with individual team members; working closely with team leaders; and providing support through prayer, encouragement, and feedback — Romani quickly discovered the rewards and challenges of the position.

“As squad leader, I really enjoyed walking people through things and watching the transformation as God changed their hearts and began to mend their brokenness,” said Romani. “But I also had the responsibility of calling team members out. I had to learn to be bold and say what needed to be said, even when no one else wanted to say it. That part of it — stepping up and discussing the hard things — was really challenging for me, but also really helped me grow.”

The tough lessons learned through stepping up as a leader and the eye-opening and, at times, heartbreaking realities she faced through full-time submersion into ministry proved to be some of Romani’s greatest takeaways from the trip. But in the spaces between those sobering experiences, when precious time to take in the sites and explore local life presented itself, Romani encountered different kinds of once-in-a-lifetime opportunities: hiking up a volcano and sledding down it (also known as volcano boarding) in Nicaragua, riding elephants in Thailand, and swimming with great white sharks off the coast of Africa. But perhaps her favorite part was simply enjoying the unrushed pace of life that permeated through the communities and cultures she visited.

Now, after only a short time back in the states, Romani is still in shock and a bit disbelieving at how she spent her last year. After traveling the globe with nothing more than a backpack, making friends with people all across the world, and being pushed in ways she never imagined, Romani feels deep gratitude for the way God worked to make the race happen and for what He is still doing in her.

“I know I’ve changed through this trip, but I’m still discovering how exactly,” she said. “I think I already deal with situations differently and have a new love for people because I can see them more through God’s eyes now.”

Romani is sure the things she learned on the World Race are preparing her for the next season of her life, whatever it may hold. And while still uncertain about the future, she is more confident than ever in God’s faithfulness and His call for her to continue leading and helping others.

“I want my life, my job, everything I do to be a ministry,” said Romani. “God’s given me this joy, and I have to share it with others. I feel like I can see the light at the end of the tunnel when other people can’t, and I want to encourage them to keep going.”