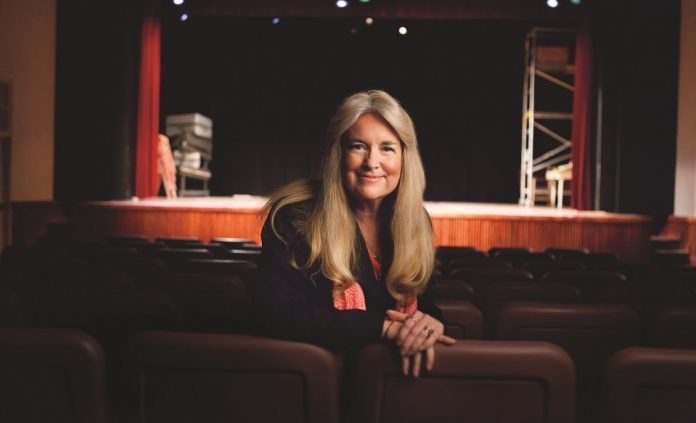 For Dr. Ronda Winderl, professor of communication and theatre and director of the London Semester Program at PLNU, performing has always been as natural as breathing. With a dramatist for a mom, Winderl grew up learning that everything could have a theatrical base, and was often the assistant and resident actor for her mom’s creative endeavors. Those seeds took root, prompting Winderl to earn a bachelor’s in drama and speech from Olivet Nazarene University, a master’s in directing from Emerson College, and a doctorate in theatre from New York University.

In addition to pursuing a well-rounded education in her field, Winderl has also worked in nearly every aspect of the theatre, including acting, directing, choreographing and technical production. Her work has been at both the high school and collegiate level and she founded the theatre program at Eastern Nazarene College (ENC) in Boston while earning her Ph.D. in New York.

After 28 years at ENC, where she helped create the communication and theatre arts major, build the theatre facilities, and produce and direct four to five productions each year, she and her husband, Carl, decided it was time for a new adventure. Persuaded by a few friends in San Diego, they decided to look into what opportunities awaited them across the country.

“From the time we stepped off the plane in San Diego, everything about our experience was so clearly convincing that it was where God wanted us,” Winderl said. “We’ve never regretted it.”

Now, 14 years later, Winderl is still bringing her love for theatre to students at PLNU, both in the classroom and across the pond. While on campus for half the school year, Winderl teaches and introduces her students to theatrical works throughout the San Diego community. Her spring semesters are also busy with preparations for the fall, when she is able to combine her love for theatre and travel through PLNU’s London Semester.

Founded by the Winderls in 2004, the London Semester Program takes cohorts of around 20 students each fall to the U.K. for an in-depth, hands-on look at the history and ever-changing landscape of the theatre. The semester offers students nine courses, which vary each year. In addition to learning about and attending productions, students also spend the semester soaking in the culture, interviewing locals as part of a British Experience course, and even getting plugged in with a church in their community.

“The most rewarding parts of directing this program have been all the creative experiences I’ve been able to share with students and getting to watch their spiritual growth,” Winderl said. “They are learning, growing and discovering all the time, and that challenges and excites me. It really is a synergistic experience and I feel so blessed by that.”

While exploring the theatre alongside her students is what drives Winderl’s dedication to her work, she has also accumulated a few other accolades over the years worth boasting about. In 1999, the Independent Reviewers of New England nominated her for Best Director, an award for which she was the only academic theatre director to be considered. She has also had the opportunity to work with Tony and Oscar award-winning composer Stephen Schwartz to help develop the musical Children of Eden, which she was then able to direct and choreograph in its non-commercial U.S. premiere in Boston. This honor was especially rewarding for Winderl, as she admits that over the years, musical theatre has become her specialty. She has since brought that deep love for musical theatre to PLNU’s stage, directing favorites such as Little Women, My Fair Lady, Little Shop of Horrors and Godspell. Since 2002, Winderl has worked on 16 shows at PLNU—and that’s just the tip of the iceberg. Throughout her career, she has directed an impressive 120 productions— each of which, she says, has invited students to celebrate life, explore emotions, and appreciate the human condition in a new way.

“Theatre offers a place to look at tragic or comic choices people make,” Winderl said. “How we analyze or respond to the characters’ choices becomes a guide or challenge to how we look at our faith, because a lot of times we are faced with making those same choices.”

When not attending productions, teaching, or organizing the next semester abroad, Winderl loves to play tennis and piano, is a self-professed film aficionado, and travels as often as she can. With close to 100 countries checked off her list so far, she has no intention of slowing down.

“One of my favorite quotes by Mark Twain says, ‘Twenty years from now you will be more disappointed by the things you didn’t do, than by the ones you did do. So throw off the bowlines. Sail away from the safe harbor. Catch the trade winds in your sails. Explore. Dream. Discover,’” Winderl said. “I try to live by those words.”

The Restorative Power of Street Art

Setting out Into the Deep