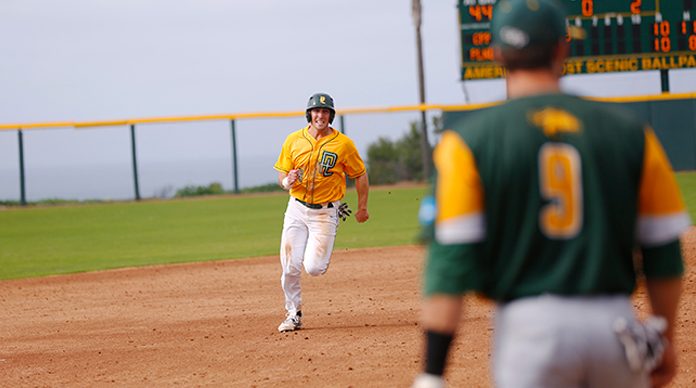 Ryan Garcia (17) grew up in a Catholic home, so he didn’t come to PLNU without any idea of God. It’s just that though his parents were committed to their faith, Garcia wasn’t really pursuing his walk with God when he entered college. He’d checked off taking his first communion as a child and had since turned most of his focus to sports. He was passionate about football, basketball, and, especially, baseball.

“When it came time to go to school, it came down to where I received the most money to go play college baseball and still receive an education,” Garcia said. “It ended up being PLNU, and so I committed.”

Since Garcia saw himself as primarily an athlete, he dismissed the other opportunities that might await him at school.

“Going in as a freshman, my parents and grandparents told me PLNU is an amazing university,” he said. “They told me it offers a lot more than baseball. But when I first committed, all I had in my mind was baseball. It was immature, but it was just baseball, baseball, baseball.”

His first year at PLNU, Garcia’s tunnel vision prevented him from fully engaging and left him less than happy. He was playing well, but he was struggling in his classes and emotionally. Then, the unthinkable happened.

“In the 32nd game of the season, I dove into second base and tore my labrum and ended my season,” he said. Garcia underwent surgery on his right shoulder, and suddenly, the one thing that had been going right wasn’t. “I had my love taken away from me,” he said. “I wondered: Why is this happening? This isn’t what I pictured.”

Things got worse for Garcia before they got better. A month into his recovery, his shoulder was not progressing as it should. After a month in a sling, he had very little range of motion. “One night, I just broke down on the side of bed,” Garcia said. “I ended up going across the street from where I lived, and I just went to the Lord in prayer.” That night of turning to God and really seeking him for the first time marked a turning point for Garcia in every way. His spiritual transformation led to his physical improvement, his full engagement in school, and, eventually, his return to the sport he loved.

“The next morning was the first time I could move my arm,” he said. “It was suddenly full range of motion. I was so in shock. I still can’t really explain it. It was a miracle. I had opened my eyes to realize I needed to trust God’s plan for me. Now I can see he had to take something away from me to gain a relationship back with me.”

“When my senior year ended, I looked back on the whole experience, and I wished I didn’t have to leave such a beautiful place and everything it offered.”

Garcia’s new relationship with God inspired him to take hold of what he had been missing at PLNU. He began attending Bible study every Monday night and participating in community outreach. His sophomore year, he found a mentor in Josh Bingham of Campus Outreach San Diego. He also flourished under the spiritual and personal mentorship his baseball coaches gave to him both on and off the field. Garcia realized that “their doors were always open” and that they were there to coach him in life as well as baseball.

Garcia pursued a business finance major. He embraced the opportunity to complete an internship, working as a financial analyst for a 3D printing company. After his initial difficult year, Garcia successfully graduated from PLNU in 2017. Just a few weeks later, he was selected in the 32nd round of the 2017 Major League Baseball Amateur Draft by the Seattle Mariners. His senior year stats had included a .344 batting average with 10 doubles, 14 home runs, 39 RBIs, and 40 runs scored. He led the PacWest Conference with 40 walks, which ranked him eighth in NCAA Division II. Even with his shortened first season, Garcia left PLNU ranked second in career doubles (43) and third in home runs (32), walks (109), and runs batted in (148). He is also fifth in runs (135) and sixth in hits (211).

“When my senior year ended, I looked back on the whole experience, and I wished I didn’t have to leave such a beautiful place and everything it offered,” he said.

But leaving PLNU to pursue his long-term dream was another step of faith for Garcia. He describes being a minor league MLB player as “way different than college,” but it is a difference that is allowing him to continue to grow.

“It’s long days and a grind on my body, but I’m loving it,” he said. “Our team has great guys and a great coaching staff. It’s an opportunity to keep mental strength and perfect my craft.”

Thanks to his time at PLNU, Garcia has a source of inner strength that continues to fuel him: a faith that is his own in a God who loves him.

Find out more about PLNU Baseball