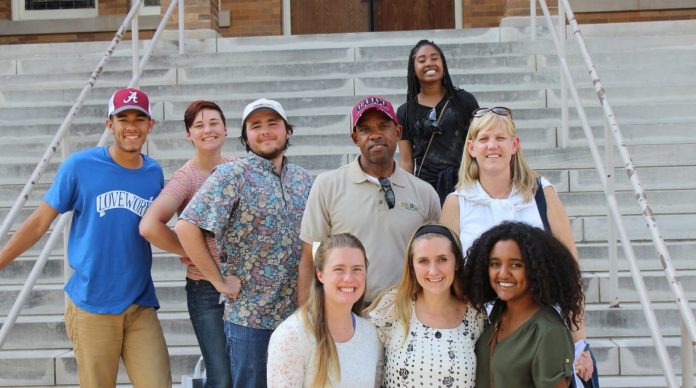 This summer, I had the opportunity to travel with several other PLNU students and leaders on a LoveWorks trip to Selma, Ala.—a 17-day museum and mission trip with the primary goal of fulfilling a need at Selma high schools.

“To look at people through the lens of Christ, I had to look at myself with the same lens.”

Prior to leaving, our team led university-wide giving competitions and weight-lifting challenges, together dubbed the “Selma Strong Campaign,” through which we raised around $10,000 to upgrade and refurbish the gymnasium at Southside High School in Selma. The effect, which we eventually saw when we arrived, was remarkable.

We started our trip in Birmingham and Montgomery, touring museums and historical locations. For me, the churches stood out; so much of the civil rights movement was born in congregations of the neighborhood churches, places where people like Martin Luther King, Jr. were moved toward greater callings. Large African-American communities formed around these churches and have carried on for generations, playing a huge role in shaping the direction of the civil rights movement.

After touring these significant places, our team headed to Selma, where we spent more than a week with local churches and congregations, and were hosted by church members.

We then got down to work at Southside High, where we were welcomed with open arms of gratitude from all the teachers and administrators, even some from the district. They were so thankful we were coming to work with students. Every day we arrived early, painted the gymnasium, volunteered in classrooms, and gave workshops to a specific small group of students.

We focused on StrengthsQuest trainings and job-oriented workshops with about 20 students from varying classes, who were distinguished as Southside High’s highest achieving and most ambitious students.

While there, we met a lot of great people, went to fascinating museums, hung out with amazing students, and learned a lot about the civil rights movement and the status of race relations in the South and the rest of the country.

Rather than purely educational, at times the trip was very emotional for a lot of the team, myself included. At a museum, a picture of White crowds amusingly watching the lynching of a young Black man had a devastating effect on me. For some students, seeing a KKK uniform from 1992 was horrifying, since this was during our lifetimes.

Topics that permeated team conversations were our identity as Christians, and how Christ’s presence fit into the South during the civil rights era. KKK members identified themselves as predominantly Christian, and Black Southerners equally identified themselves as such. Our team, myself in particular, struggled with the idea that the body of Christ could be so against itself.

I felt so challenged going into the South, coming from my suburban life into the diversity and distant culture that is Southern America. The race relations are different there, and aren’t easily explained in media or popular culture.

There is no legal segregation in the South, but there is cultural segregation. I asked people of both Black or African American and White American races how they conceived of the interactions between members of different races, and both groups made the point that, although there isn’t much outright racism, it is still a presence; it exists below the surface and is part of the way people think and react to situations.

When our team debriefed each night in Selma, I was challenged even more when I heard the experiences of students on my own team; some had experienced racism from a place I never expected—my own school.

We discussed an incident that happened earlier this year on campus:
a student posted hateful and racist comments on an anonymous social media channel. This one extreme incident was addressed immediately by students and administrators to make known that our campus rejects such attitudes.

What doesn’t get reported, though, is stereotyping and more subtle offenses, like the fact that my friend doesn’t eat certain food in the cafeteria anymore, because if she does, she knows there will be comments made without exception. Or when my other friend sat in a class last year and listened to fellow students claim slavery was a good thing, because “it brought black people over to the U.S. and civilized them.”

During the trip, I found myself returning to Luke 9 with great frequency. In it, Christ tells His disciples, “Whoever wants to become my disciple must deny themselves and pick up their cross daily and follow me.” I sought answers to the question, “What does it mean to deny myself and pick up my cross?”

To deny myself, I had to look for ways to identify myself in the first place. The LoveWorks training we did prior to leaving focused on preparing us for the different culture our team would be immersed in. Our leaders told us before the trip, “You can find your own culture in the differences you see in another’s.” I saw how the Southerners were different from me, but it only showed me how I was different from them. I said the words, “dude,” “man,” and “rad” a lot more than everyone else did. My hair was longer. A Hawaiian shirt and shorts were acceptable as church clothes back home but not in Selma.

These were the noticeable behaviors and traits that conveyed to other people who I was.

To deny myself, I had to admit the labels other people put on me or I put on myself, the characteristics and prejudices I carry with me, don’t make up my identity. When we accept Christ, He becomes our identity. As Paul says, “there is neither Jew nor Gentile, slave nor free, male nor female, for you are all one in Christ.” I think a lot of people interpret that verse as, “everyone is and should be the same.” Equality should be strived for, but when Christ remakes our identities, He also makes us unique. As Paul says, “We are all one body and the body is made of many parts.”

One of our trip leaders, Glen Laster, assistant director of public safety, said several times during the trip, “You’re responsible for what you know.” What do I now know? I know there are still struggles between different races, nationally and here at home. I know this world can be a hard place. But I learned in Selma just how powerful Christ’s love can be and how important it is to act upon it with everyone. Now that I’m home, I want to do what I can to make a difference, for my classmates, for my friends, and for all people.

To look at people through the lens of Christ, I had to look at myself with the same lens. I am nothing more than a person loved by Christ, just like everyone else. The task I have now that I’m back home, after 17 days in the South, is to figure out ways to fight complacency and listen to the voices of all people. I always had that task, but now, I’m responsible for what I know. And what I know is Christ’s love.