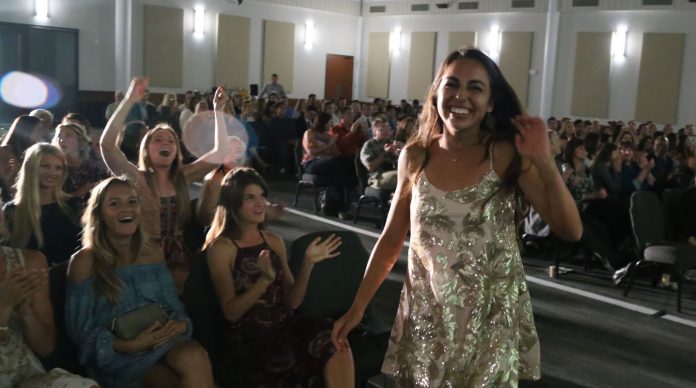 On Sunday, April 30, two hundred of PLNU’s student-athletes and 150 of their family members, friends, coaches, and mentors gathered at Liberty Station Conference Center for the inaugural Sea Lions Athletic Merit (S.L.A.M.) Awards. Established to recognize the athletic success, academic achievement, and community dedication of our student-athletes, the S.L.A.M. Awards are expected to become an annual tradition at the close of every school year.

As the student-athletes arrived on that warm April evening, they were nearly unrecognizable, having traded in their green and gold uniforms for flower crowns, floor-length chiffon, quirky bow ties, and button downs. Parents and coaches mixed and mingled, sharing their experiences from the past season. Just beyond the glass doors of the Liberty Station Conference Center laid a red carpet worthy of Hollywood Boulevard, leading the student-athletes and guests to the perfect photo opp in front of the PLNU Sea Lion logo.

At the dessert reception, plates were piled high with chocolate-covered strawberries, fruit tarts, and lemon bars. Sea Lion-green lights illuminated the back of the stage, where the evening’s awards of etched glass waited for their winners to be called. Clad in rhinestones and sequins, PLNU student Taylor Roldan prepared to hand out each award of the evening, à la Miss Golden Globe. A projector screen playing a slideshow of the season’s highlights hung above, as the guests started to fill their seats.

As the ceremony got underway, President Bob Brower congratulated the student-athletes on a very successful 2016-17 season, adding that PLNU Athletics was the recipient of the 2016 Presidents’ Award for Academic Excellence for NCAA Division II. PLNU’s Academic Success Rate, which reflects the percentage of student-athletes who graduate within six years of their college enrollment, was the highest of 26 Division II member schools at a whopping 99 percent.

Ethan Hamilton (97), PLNU’s athletic director, presented the first of 18 awards, which also happened to be a surprise award for one of the hardest working staff members PLNU Athletics has ever seen. Richey Rodgers, athletic facilities assistant and athletic training clinic custodian, was awarded the Honorary Athletic Staff Award.

“As a part of the athletic facilities team, Richey has added to the overall quality of the team with his incredible work ethic. We have been able to better serve our student-athletes with their equipment and locker room needs because of his service,” said Hamilton. “Richey is the ultimate example of a servant’s heart and takes pride in everything he does.”

Midway through the program, the 48 senior student-athletes who would be graduating in less than a week’s time were honored with a slideshow tribute. Following the bittersweet slideshow, all the seniors were asked to stand and be recognized for their contributions to the Sea Lion family.

“Dr. Carroll Land was the unanimous winner for this award for his long-term involvement, employment, and support of PLNU Athletics,” said Hamilton. “As a testament to his devotion to PLNU Athletics, our baseball stadium reflects his namesake as a lasting legacy.”

The wide range of categories, which included unconventional awards like Best Dressed and Fan of the Year, made it possible to recognize the student-athletes for more than just their achievements on the field. Categories such as Heart of a Sea Lion and Comeback Player highlighted the strength and resiliency of the student–athletes, while the Sportsmanship Award acknowledged the athlete who maintained a positive outlook among his or her teammates.

It’s safe to say we can expect many more successful S.L.A.M. Awards in the future, thanks to the hard work of PLNU Athletics and the amazing student-athletes who make us all proud to be Sea Lions.

Keep up with your favorite PLNU sports team