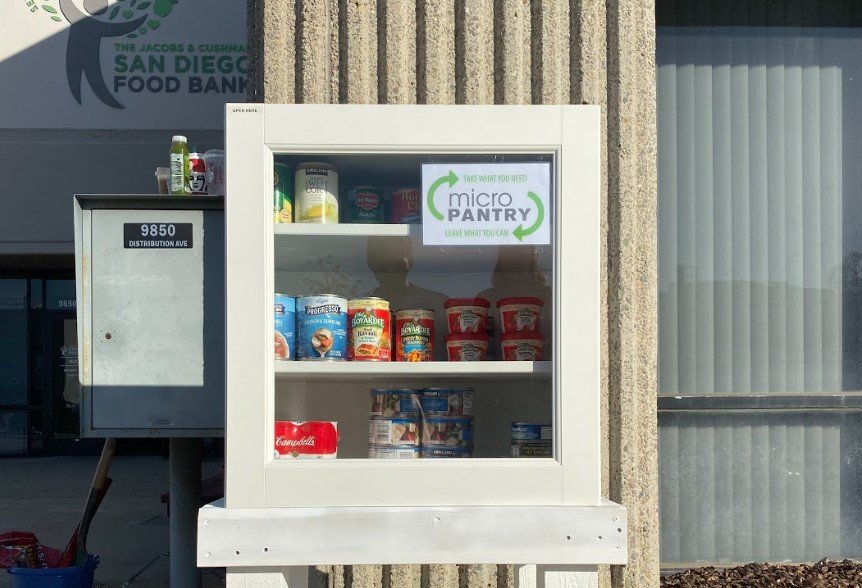 Nearly 450,000 San Diego residents deal with food insecurity on a daily basis. Nearly half of all college students across the country are also faced with this problem. A group of students at PLNU  decided to do something about it.

Founded on the concept of social entrepreneurship, the Enactus Club was started at Point Loma two years ago by Frank Marshall, DBA, and a group of students within the Fermanian School of Business who were passionate about using their knowledge to serve others. PLNU’s chapter is one of 1,730 at university campuses around the world. Enactus chapters work to merge business principles with community needs. From the beginning, the students of Enactus PLNU sought to make a difference at the local level.

The students found their calling for the club after connecting with the Jacobs & Cushman San Diego Food Bank. This organization is committed to helping those residents who face food insecurity. Shelly Parks, director of programs for the food bank, explained that their warehouse is known as a place where people can come to get food for their families, but their hours of operation are limited to a Monday through Friday schedule from 8 a.m. to 5 p.m.. “Imagine if you drove here after work needing food and got here at 5:30 to closed doors,” she said.

The harsh reality of this situation was not lost on the students who decided to combat these limitations by looking into the concept of micro pantries.

The harsh reality of this situation was not lost on the students who decided to combat these limitations by looking into the concept of micro pantries. According to Parks, this idea had been developed in the Midwest but had not yet come to Southern California. Similar to the numerous Little Free Libraries scattered around major cities across the country, a micro pantry is a wooden enclosure that holds nonperishable items so people are able to take what they need and others may leave what they can.

Hanna Vanca (20) explained that Enactus is principled on the idea of students being able to fund whatever project they choose themselves. This meant the group had to find a way to make a profit which would supply the money for the materials needed to build their micro pantries.

They worked with the Fermanian School of Business to design and sell polo shirts to alumni and faculty. Vanca said, “We’ve had barriers in costs but we didn’t shy away from that. As a business student, this club reassured me that there can be good in what we are doing. It’s about more than just closing a deal.” When they had raised enough money to buy the necessary supplies, one of Point Loma’s Resident Directors, Jong Yoon, taught the club how to put all the pieces together.

In between Thanksgiving and Christmas, five Enactus students installed this pantry outside of the food bank that they had built and funded themselves. This installation allows food to be more readily available and takes away the shame some might experience when they come for resources. Vanca explained that this project is about “meeting people where they’re at.” She also noted that the community and food bank will keep it going now that it has been installed.

In the midst of COVID-19, this became an even more valuable asset than before with the pantry being empty nearly every morning. Parks said one in six individuals in San Diego need food assistance, and the effects the virus has had on people’s lives have only increased this need. Parks said the Enactus club has really started the movement for micro pantries in San Diego and hopes others will be inspired to follow their lead. “It’s definitely important that students are doing this, but we need people from every walk of life to be involved and do what they can to help.”

Marketing major Estelle Kistner (22) had plans for the club to install a second pantry they had already constructed at a church in Oceanside when the nationwide stay-at-home order was issued. The success this project had within the community prompted many other organizations and churches to reach out asking if they could have similar installations as well. The pandemic stalled these efforts, but Kistner remains optimistic. She said that while they may not be able to continue in their work right now, they are determined to keep serving the community as soon as they are able.

PLNU Enactus members know their efforts alone are not enough, but they are glad to be involved in starting something that will hopefully inspire people to see the impact of food insecurity and make their own push for change. Kistner explained, “When we apply the knowledge we receive in a classroom setting to the real world we not only transform communities, but also develop and challenge our own character and faith, something that I think is crucial in today’s business world.”