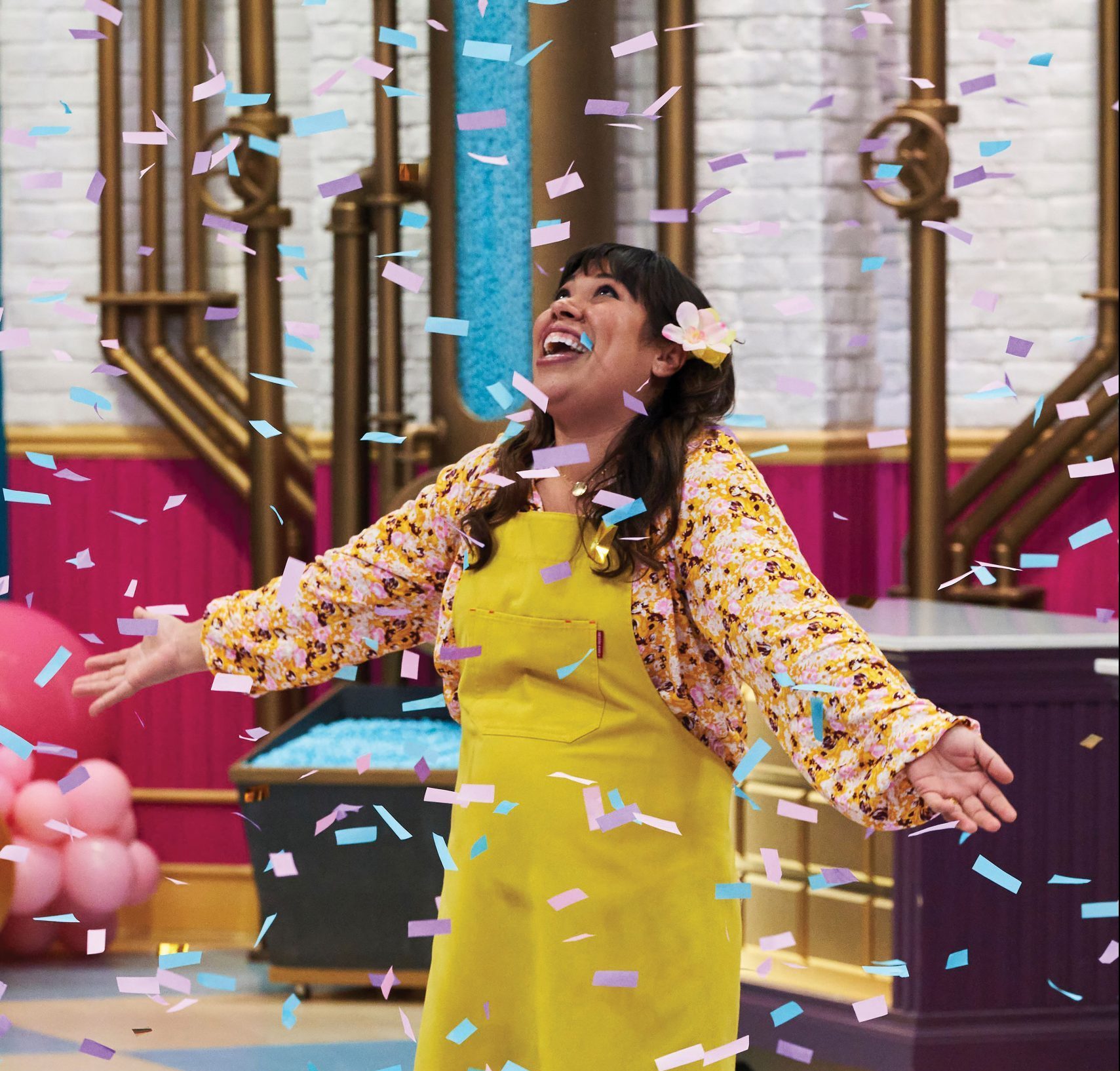 With confetti raining down around her, Maile (Cerizo) Crewdson (07) was named the winner of “The Great Chocolate Showdown,” which aired on Food Network Canada this spring. While winning was certainly a sweet dream come true, it was also part of a journey that hasn’t always been easy.

“My son, Cyrus, was born with anaphylactic food allergies,” she explained. “Cooking and baking have been such a big part of the journey of keeping him safe.”

Still relatively new to the kind of techniques that typically land bakers on TV, Crewdson brought to the show not only the flavors of Hawaii, where she grew up and currently lives, but also of allergy-friendly baking and her family in particular.

Always known for her easy smile and sunny personality, Crewdson’s positive attitude was on display throughout the competition. She enjoyed the “wonder” of the experience and relished the learning aspect as much as the competitive side. She let her loved ones be her guide and motivation.

Crewdson brought to the show not only the flavors of Hawaii, where she grew up and currently lives, but also of allergy-friendly baking and her family in general.

Despite her upbeat outlook, the competition was challenging. There were times she was nearly eliminated and times of disappointment. For example, in the second episode, Crewdson and the others were competing for a golden whisk that would give them one-time immunity from elimination later on. Crewdson made whimsical sheep but missed filling one, which was disappointing.

Later in the same episode, however, Maile let her family inspire her to a creation the judges loved: a raspberry cheesecake ice cream waffle sandwich made with ruby chocolate. It was a piece of home where waffles are a Saturday tradition.

“When I got really nervous, I tried to relax my breathing and pretend I was back at home in my own kitchen baking for my kids or baking with them. I think the joy of home set me apart.”

“When I got really nervous, I tried to relax my breathing and pretend I was back at home in my own kitchen baking for my kids or baking with them. I think the joy of home set me apart.”

“For my eldest daughter, Ruby, I’m using ruby chocolate; for my middle child, Cyrus, I’m doing chocolate chips in the waffles; and for my youngest daughter, Rose, I’m going to put little roses on each bubble waffle,” she told the camera. When she won the challenge, she said, “My family was my inspiration for this ice cream sandwich, and even though they’re not here, they helped me to win.”

In another episode, the bakers had to create a work of pointillism- type art using truffles, and Crewdson used her house as her picture’s design.

Another aspect of Crewdson that frequently showed up was her kindness and compassion toward her competitors. She often teared up when friends were eliminated and told one baker that she wished she could give her a hug when her chocolate mold cracked. When she was paired with competitor and new friend Lexi for a team event and in the finale, her excitement and gratitude were always apparent. Upon her victory, Crewdson called everyone in for a group hug, which they seemed glad to share with her.

That victory came after a seven-hour challenge in which each of the top three finalists had to tell their personal baking story in a four-part challenge called “Once Upon a Baker.” Each baker had to complete a dessert honoring a loved one who helped inspire their baking journey; a judge’s choice order; an interactive creation; and a “dazzling showpiece.” For her first dish, Crewdson chose Hawaiian-style malasadas filled with guava white chocolate pastry cream to honor her dad.

Another aspect of Crewdson that frequently showed up was her kindness and compassion to her competitors. Upon her victory, Crewdson called everyone in for a group hug, which they seemed glad to share with her.

For her second dish, the judges challenged her to create a Charlotte Royale, a sliced jellyroll cake filled with mousse. Maile’s version was a chocolate raspberry cake surrounding a Bavarian raspberry crème white chocolate mousse. Her interactive dessert featured one of her allergy-friendly recipes – a flourless chocolate almond torte topped with mascarpone cream, figs, and mangos all hidden within a dark chocolate heart. Finally, her showpiece was an anti-gravity cake featuring the leaves of a Monstera plant – a plant that adorns her yard at home.

When she won, Crewdson knew she would use the opportunity and success to bless her family. It was time to expand upon their 500-foot living space and take new steps in baking as a career.

“Most large properties [on Maui] can have a main house and an ‘ohana’ [cottage],” Crewdson explained. “Then you can [afford to] live here by renting [the cottage] out.”

The Crewdsons’ property has been lacking the main house, however, which explains both why their family of five has been living in a tiny ohana and how they decided to use Maile’s $50,000 prize from the show.

“We spent all our winnings on wood!” she laughed. “Ken is building our main house almost completely on his own.”

Always ready to help others, the Crewdsons plan to rent one floor of their new home to Maile’s cousins. The ohana can help support their family over time. And with a bigger kitchen, Maile will be able to expand her business, and possibly even purchase a food truck.

“Right now, I have a cottage-style baking business,” she said. “It’s dedicated to my son, and I specialize in allergy-friendly treats.” Her business is called Cyrus Baking Co.

Though Crewdson didn’t always know she would take this path for her career, the joy she finds in it is a familiar joy.

“I think being a journalism major at Point Loma might not seem like it connects right away,” she said. “But I’ve always loved telling stories. Baking is a way for me to tell a story through something tangible … My favorite professors, [Drs.] Karl Martin and Dean Nelson and Carl Winderl, taught me to think outside the box and that creativity can take on a lot of different forms. Dr. Martin instilled in me a love of literature and a love of wonder. In life and in being in the show, that’s something I never lost sight of.”

“I’ve always loved telling stories. Baking is a way for me to tell a story through something tangible.”

Crewdson has woven her own story with the love of family and her faith since earning her degree.

“After graduation, I moved home for a couple years and I worked for Mama’s Fish House in guest relations,” she said. “I moved home because my grandma was sick.”

While she was home, her cousin visited on military leave from South Korea and brought along his roommate, Ken. Maile and Ken hit it off and dated long distance before marrying and moving to Seattle when Ken’s service was complete. There, Maile did nonprofit marketing and started her own wedding planning business. Then, after a month-long trip to Europe, the couple moved to Ken’s home state of Alaska where Maile worked in payroll and human resources for a logistics company until her oldest child, daughter Ruby, now 7, was born. Her son, Cyrus, now 5, and daughter Rosie, 4, soon followed.

“Baking was a creative outlet, and I would include the kids as much as possible. We baked so many different things — cakes, cookies, donuts, malasadas. We would wheel the kids around our neighborhood in their wagon and drop plates off to our neighbors. It was a really cute way to still stay connected to people. It also helped us feel rooted.”

“We would wheel the kids around our neighborhood in their wagon and drop plates off to our neighbors. It was a really cute way to still stay connected to people. It also helped us feel rooted.”

In 2017, the Crewdsons moved back to Maui. Ken works as an electrical engineer for the Maui Electric Company, and Maile has mostly worked as a stay-at-home mom.

It was when the COVID-19 pandemic began in 2020 that Maile began to delve deeper into baking.

“Baking was a creative outlet, and I would include the kids as much as possible,” she said. “We baked so many different things – cakes, cookies, donuts, malasadas. We would wheel the kids around our neighborhood in their wagon and drop plates off to our neighbors. It was a really cute way to still stay connected with people. It also helped us feel rooted.”

Maile also decided it was time to face some of her fears and check a few items off her bucket list. One recipe that met both criteria was for croissants. She had enjoyed going to the bakery with her father as a child and even as an adult. But once they’d landed in the emergency room multiple times with Cyrus and discovered his extensive allergies, she hadn’t been able to do that. She decided she would strive to bring the bakery experience home in a way that was safe for her family.

“I’d always wanted to try to make croissants,” she said, laughing, “But it seemed too hard! They were on my bucket list though, so I read up on them, tried them, and I nailed them! I was really proud of myself!”

Crewdson posted some of her creations to Instagram (her handle is @littlemauifamily), and that’s what caught the eye of a casting agent from the Food Network in summer 2020. However, after a lot of prayer, the timing didn’t feel right to the Crewdsons. By the end of the year, Maile decided to fast from social media for six months. When she returned in June 2021, the casting agent was still interested, and this time, they felt the timing was better. Maile was selected for the Great Chocolate Showdown and headed to Canada for over a month to film.

“It was my first time on my own since having kids,” she said. “My husband encouraged me to look at it like this is an opportunity for me to be on my own and to pursue something I’m passionate about. It was kind of like a getaway — but you have to work really hard! I think I approached it the most like I am going there, and I am going to have so much fun. I’m going to see what I can take away from this experience. It felt like a once-in-a-lifetime opportunity to really grow. And I think being a mom helped me be able to handle the long hours of days on set and days filming.”

In an email thanking her family and friends for their support just before the finale aired, Crewdson wrote, “Thank you so much for all your love and support! This season grew me and stretched me in ways I’m still processing. It was one of the most challenging and also gratifying things I’ve ever done in my life. It showed me that I am capable of doing hard things. I’m so thankful for how God walked with me every step of this journey.”