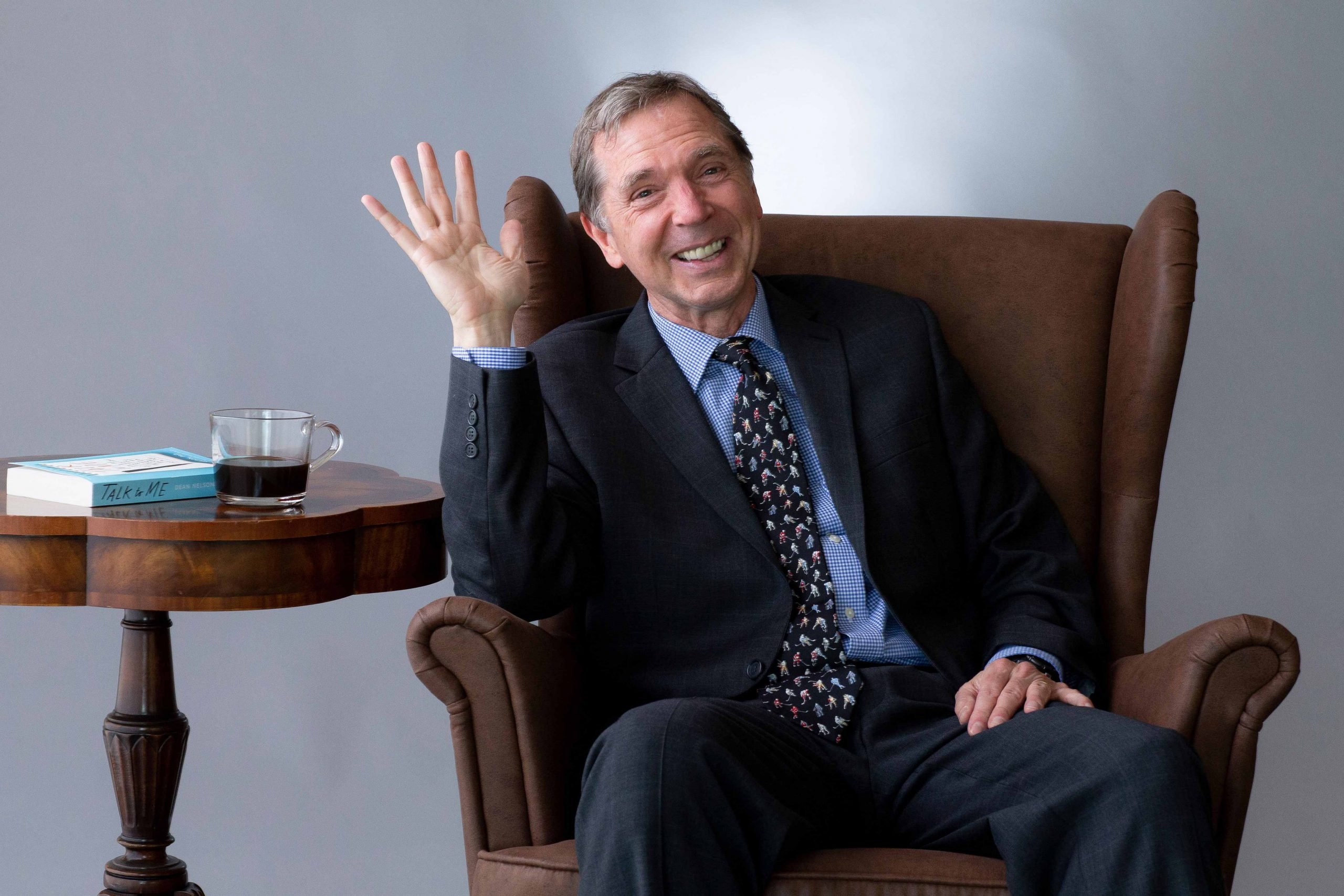 Home 2019 Summer Talk to Me: Dean Nelson on Better Conversations

As a journalist, storyteller, and conversation enthusiast, one of Nelson’s favorite questions to ask comes from This American Life host and producer Ira Glass: “Is this how you thought your life would turn out?”

It may sound simple, but the answer is always no, Nelson explains. And you end up getting two whole stories out of the deal. Nelson’s own story is no exception.

From starting out as a pre-med student in college to working at a church coffee shop in Detroit, it was an innate curiosity about the world and the ability to explore it through writing that led Nelson to journalism.

Now, after a nearly 40-year career, Nelson’s new book is helping new generations of journalists — and readers of any profession — incorporate that same sense of curiosity in their own work, ask questions of the world around them, and better connect with one another on a deeper and more personal level.

Nelson frames the book as “both a practical guide to conducting great interviews, and an inspirational quest for how to talk and listen to one another more effectively.” In it, he writes: “Virtually every profession depends on getting people to talk to you, and the good news is that conducting a great interview is something you can learn.”

As an example of this, Nelson explains how, between two doctors, he feels he receives better medical attention from the one who takes the time to ask more personal and comprehensive questions about his life, rather than the one who asks the typical rapid-fire clinical questions and sends him to the pharmacy. He also shares how a social worker he knows can better advocate for the children she serves by diving into the context in which these children grow up and asking tough questions about family and socioeconomic backgrounds.

Virtually every profession depends on getting people to talk to you, and the good news is that conducting a great interview is something you can learn.

As for journalists, a big component of the book is taking the process of interviewing beyond just trying to land the interview in the first place and focusing on what to do once you get there, as well as the preparation that can help you beforehand.

“A lot of journalism students — at Point Loma and elsewhere — presume you have to be an extrovert to be a good interviewer. That’s not true. You have to be authentic. This book helps diminish that awkwardness and replaces it with confidence; that if you do some thought and preparation and planning, you’ll do fine.”

The timing of Talk to Me is important, as Nelson explains in an interview with Lisa Mullins of NPR, because of the lack of civil conversations that he was noticing.

“When you think about how difficult it is for groups who disagree with one another to talk in a civil manner, this book fits very well in the climate of hostility. One of the things I address is actively listening, and instead of trying to score points and convince others, think of each other in a way that lets you hear their story, and search for the humanity in one another.”

Invited by Rob Bell for an interview on his Robcast podcast, Nelson reflects on an article he wrote years ago about a Southern California serial murderer known as the “Night Stalker.” Seeking eyewitness accounts after one such attack in a quiet suburban neighborhood, Nelson faced rejection after rejection from potential sources until he found out about a neighbor who let in a fleeing survivor. What led Nelson to getting the interview with this woman was simply asking how she was doing and connecting with her on a personal level.

“While a murderer and rapist is still on the loose, she let me, a total stranger, into her home to talk with her about such a horrific thing while she’s cooking dinner,” Nelson recalls. “But a deeper thing happened, where we were two human beings who connected beyond the roles we typically play in society.”

Reflecting on the same incident in Talk to Me, Nelson adds a universal truth Ray Bradbury once told him in an interview: “we owe it to the universe to ‘bear witness to the miraculous.’”

Good interviewers give others the opportunity to give voice to what they observe, experience, ponder, question. Good interviewers help us understand ourselves and others because they draw out these dimensions.

One of Nelson’s goals for journalism students at PLNU is that they won’t settle for easy answers ­– that they’ll be looking for the deeper and, simultaneously, more transcendent components of life. From politicians to faith leaders, everybody is so much more complicated than we think they are.

In his book, Nelson writes, “Good interviewers give others the opportunity to give voice to what they observe, experience, ponder, question. Good interviewers help us understand ourselves and others because they draw out these dimensions.”

Related Article: Creating a safe space to ask ignorant questions of each other.

Being asked to create PLNU’s journalism program in 1984, Nelson and his wife originally moved from Minnesota to San Diego with the intention of staying for just a couple years to get the program up and running. “But then we realized — completely unrelated to weather — that there was this place where I’d be surrounded by scholars and motivated students who want to learn. I was so impressed by the colleagues who were in this department; I felt smarter just being in the same room with them.” And it was that sense of curiosity, combined with his passion for truth-seeking storytelling that kept Nelson intrigued, thinking “let’s see where this goes. Let’s make this thing awesome. I felt like I could really be part of something.”

Since then, Nelson has gone on to earn his doctorate, achieve his tenure as a professor, and continue helping expand PLNU’s department of Literature, Journalism, Writing, and Languages. Since 1995, he’s organized and hosted the annual Writer’s Symposium by the Sea, interviewing renowned journalists, writers, and authors at PLNU, including Ray Bradbury and Rob Bell, as well as Anne Lamott, Alice Walker, Amy Tan, Kareem Abdul Jabbar, and many more.

He’s continued writing in such publications as the New York Times, Boston Globe, San Diego Union Tribune, San Diego Magazine, and Christianity Today, and, in addition to Talk to Me, has written 14 other books such as God Hides in Plain Sight: How To See The Sacred In A Chaotic World and Quantum Leap: How John Polkinghorne Found God in Science and Religion.

But Nelson includes this as part of the impact he feels called to make through the overall context of the journalism program and PLNU. “If you’re in a writing community like PLNU, we sort of expect this,” he adds. “Rick Kennedy and Linda Beail, Mike Lodahl, Brad Kelle, Sam Powell, Rebecca Laird Christensen have good books out.”

Since the book’s announcement in February, journalism professors from around the country have begun adopting Talk to Me into their curriculums, including Beth Slovic of Clark College in Vancouver, Wash. “It reads like easy, breezy self-help for journalists,” she said in an email to other college journalism professors and media advisors. Students in her class and the Clark Independent campus newspaper she advises have enjoyed the book’s conversational tone and practical advice, she adds, improving the way they find sources, conduct interviews, and create stories. Molly Yanity, a PLNU journalism alum who teaches at Quinnipiac University, will be using the book in her classes this fall.

I would love our legacy to be for students to take this quest to listen to one another and move us past our stereotypes to a place of telling true stories and loving one another.

Darin Bunch, one of the first ever alumni of the journalism program at PLNU, contacted Nelson after reading Talk to Me, sharing that it made him rethink and change the way he would now interview, write, and record for the golf travel website, magazine, and podcast he operates.

Nelson has also recently come to the conclusion that he has fewer years ahead of him than behind when it comes to the journalism program. “I am not the future of this place,” he said. While his goal is to bring greater awareness about PLNU and its journalism program through Talk to Me, Nelson wants to ensure he helps keep the department healthy for the future. That includes thinking about who to add to the faculty, the future of the Writer’s Symposium, and even changing the journalism major to multimedia journalism to prepare to be better all-around storytellers in radio, video, podcasting, and social media, in addition to traditional journalism.

“If our students are known for being more thorough and authentic, asking better questions to get to a deeper truth, then that would be a pretty good legacy for the journalism program,” Nelson says. “But I think our students already come to [PLNU] that way … It would be disingenuous for us to say we’re responsible for creating deep, thoughtful students, that they’re vessels in which we create this. What I do think is that we’ve helped what was already there come alive in some profound ways. I would love our legacy to be for students to take this quest to listen to one another and move us past our stereotypes to a place of telling true stories and loving one another. Wouldn’t that be great?”

Related Article: The Writer’s Symposium invites us to imagine new ways to shape the world.

Bringing Play and Happiness to Children One Smile at a Time