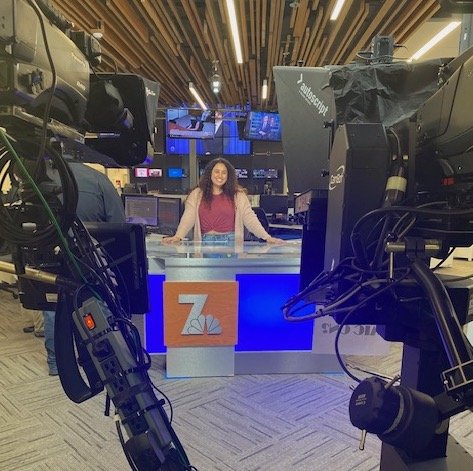 Working in the entertainment industry, PLNU alum Kristin Valdivia (18) has learned a lot about rejection. But perhaps what it’s taught her the most is using it for growth in her career; specifically, with creativity and tenacity.

“Having the background that I have and the confidence that I have with being said no to or denied — which happened a lot in acting — I got used to the no’s. But I also got used to just going out and trying out. I try my best all the time to bring new camera shots, new angles, so that we don’t just look the same.”

Originally an acting student at the San Francisco Academy of Art, Valdivia’s experiences in acting and as a transfer journalism student at PLNU were the building blocks for the fresh and unique ideas she brings to her current career in the quick-moving newsroom at NBC Telemundo.

Valdivia has been an APC Operator at NBC Telemundo since Januaray 2020. Through her time at NBC, she’s directed, teleprompted, and helped launch a weekend show and podcast.

“When you watch the news, it’s very simple, cut, and dry,” said Valdivia. “I think with my background in TV and film, I am able to bring a little more creativity to the way our newscast looks and the way we use social media. I try to pitch different ideas to reporters to help them stay away from what they’ve already been doing. If you’re doing work every day, you get comfortable instead of branching out to tell other stories.”

Her inventive and out-of-the-box outlook in storytelling grew in momentum during her time at college.

“I studied acting and that got me into storytelling,” said Valdivia. “While I was there, I was behind the scenes. I was a makeup artist and that’s how I made money while I was up there. I started to realize I think I like this behind-the-scenes stuff. I like building the story instead of acting them out.”

That’s when, after hearing about it from a friend, she decided to transfer to PLNU. The lessons she learned at the Academy of Art in tenacity and creativity infused her PLNU experience as she began to embrace her new education pathway. While she came to initially set on the PR/entertainment side of journalism, one experience would change her mind.

“It’s funny, when I first started studying journalism, I was not going into news,” Valdivia emphasized. “Then I took an internship with NBC and it completely changed my perspective on broadcast and on news. Growing up you think, ‘I’m never going to do that.’ But you can’t say that until you try it. I am very lucky enough to have experienced all of these different avenues to decide what I enjoy the most.”

Growing up you think, “I’m never going to do that.” But you can’t say that until you try it.

Her time as a production intern at NBC and also as the executive producer and news director at The Point TV on campus led her to the career pathway she’d been looking for.

“That’s when I knew, ‘This is where it’s at,’” said Valdivia. “It was a long journey trying to figure out what I want to do, and I am still going. There are so many stories to tell. Not enough people have had their voices told or heard — to have the opportunity to have people’s stories told I absolutely love.”

Her own story as a minority woman in a male-dominated industry has fueled her desire to amplify underrepresented voices within her work.

“Being a Latina and woman as well, we don’t get a lot of representation,” said Valdivia. “It’s a little bit better now, but a lot of times we still manage to have Latina women whitewashed on TV. Being able to help normalize, in general, all ethnicities on TV and getting stories that are more cultured is a big push for me.”

Being able to help normalize, in general, all ethnicities on TV and getting stories that are more cultured is a big push for me.

She’s already seen change happening around her during her time at NBC Telemundo.

“We have almost a whole female producer team,” said Valdivia. “Most of our reporters are female. When I first started, I was the only female director on Telemundo and now we have two more. I helped train both of them because I was like, ‘I want you to stay here. We’re going to get you hired.’ If every female can do that, who knows what kind of difference that can make?”

Her ideas and approach to reporting are indeed making a difference. She’s received three Emmy nominations for her work, and in 2020 her dream of winning an Emmy came true with the story “Incendio en La Frontera.”

“When I first started I remember helping our meteorologist take pictures with the Emmys she had one,” said Valdivia. “I had her take one of me holding her Emmy to keep in my vision board for the next year. And sure enough, I made sure I did everything I could to say yes to all the possibilities of creating a dynamic show. Within my first year I had actually won my first Emmy. I was so happy that all my hard work paid off and just felt so honored that I was able to make my parents proud.”

One Emmy award is not her end goal.

“When I was nominated again last year, that was a big deal for me as well because that nomination was a solo directing nomination,” said Valdivia. “One day I hope to be able to cross over to film and win an Oscar for directing as well. The win really has encouraged me to continue working hard and hopefully be able to direct many different forms of media.”

Whether in entertainment or news, her own story, experiences, and advice offer lessons key to embracing the creativity and tenacity needed within the worlds of broadcast and film.

“Take that risk and do what you want to do,” said Valdivia. “Learn everything you can possibly learn. Ask all of the questions. Don’t be shy. Don’t feel you’re a burden. Journalism is such a big, wide world and there are so many different avenues you can take. If you don’t take the chance to learn about all of them, then you might be missing out on something you really enjoy. Do it all.”