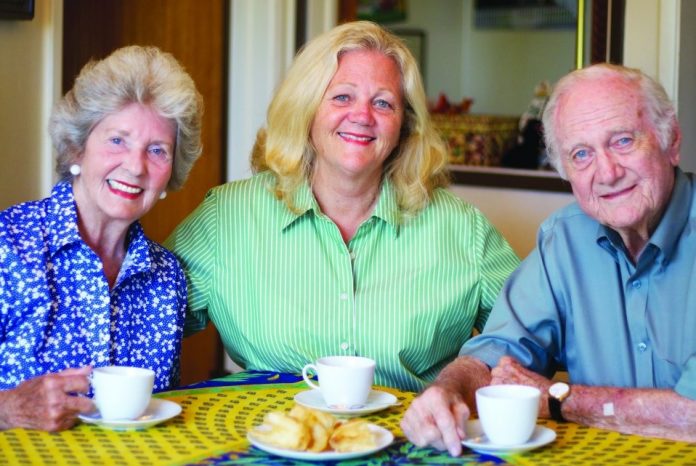 Imagine having surgery or a heart attack or suffering from a ravaging disease and not having anyone to take you to the doctor, check your meds, or hold your hand while you are in pain or afraid. Imagine having no food, but you can’t stand at a bus stop or shop on your own—or worse yet, you have no money. These daily occurrences haunted our home care staff and me during the years that I ran the volunteer program at Mercy Homecare (later known as Scripps Health Homecare)—a non-medical companionship care program for senior homebound patients age 65 and above. In the seven years that I oversaw the program, I learned that volunteers were invaluable because they became the lifeblood for those who had no outside contact. Volunteers meant everything to the patients and made all the difference to devoted family caregivers who needed a desperate break. A weekly visit was like gold.

When I launched Mercy’s program in 1993, the first place I looked for volunteers was the nursing program at PLNU. We assigned each student a patient for four months, and the students assisted with daily activities such as errands, cooking, companionship, and rides to appointments. They completed safety and dietary forms and maintained weekly diaries regarding their patients. Together, we created a psychosocial element wherein nursing students would be given a patient to care for outside the typical nursing realm. I wanted the students to have the chance to see patients not in a clinical sense but in a more daily environment after being discharged. This worked so well with PLNU that I was able to secure partnerships with the nursing programs of Southwestern College, University of San Diego, and City College. The local high schools, private and public, joined in as students needed volunteer hours for college credit, and soon enough, I was on the radio telling the city about it, writing an article for a national homecare journal, and getting more volunteers each day.

Our program was formal, but making a difference doesn’t have to be. My mother and father now live next door to me here in Point Loma. I do their shopping sometimes, borrow the occasional egg, and cook dinners for them when they need it. They watch over my dog when I’m at work. I feel blessed we are here for each other.

In addition, since I came to PLNU in 2000, I have continued to work with seniors on a private-duty basis. I’ve had a patient every year because it’s a part of my heart now. For years, I cared for my nearly blind neighbor until she passed away. We shared a common wall, and if I saw avocados or a pie on top of that wall in the morning, I knew she needed a chat and maybe some help with shopping. I took care of a woman in Carmel Valley one very hot summer. She was dying of stomach cancer, and she decided to stop eating rather than wait to die. Our long walks were filled with stories of her worldwide travels and escapades with local protestors and elephants in India. One year, I cared for a woman in Rancho Bernardo. She was 98 years old. When she was just 14, she and her sister traveled from the dirt fields of Kansas to beautiful San Diego to escape an abusive father. He followed them here, but that’s a different story. I cared for a lady who had such advanced dementia that she would just stand in a room not knowing what to do. But when I led her to a table so she could look at a book filled with Impressionist paintings, she smiled. There was indeed someone “in there.”

Homebound seniors need more than medical care. Just like the rest of us, they need the simple things that make life worth living. There were times when I couldn’t believe the stories I heard from my volunteers: the lady who had no food and put a cooler on her porch each morning hoping someone would fill it with something to eat; the volunteer who visited a woman with dementia who hadn’t spoken in years, only to watch her sit at her baby grand piano and sing in Italian (not her native language); the blind woman who trusted her volunteer to write her bills; the volunteer who was used as the fourth man in a weekly poker game; and the patient who just wanted someone to sit and watch a game with him. For some who were more mobile and anxious to get out, there were sweet moments, too, consisting of simple things—a day at the movies, a drive to see a long-forgotten sunset, a trip to McDonald’s.

Each Christmas, Scripps Green Hospital filled hundreds of baskets that our volunteers would deliver. We never forgot a birthday after one patient thanked me through wrenching sobs for a birthday card—the first she had received in more than 15 years. We dedicated an office in our building and named it the “Mercy Care Closet.” Our staff donated clothes, shoes, socks, robes, books, videos, towels, soaps, kitchen items, water, and toys for grandchildren. These were provided free of charge for any patient who wanted or needed them. Nordstrom let me start a program called “Tea for Two” in which any volunteer who brought a patient to their cafeteria was given tea and dessert for free. We had fantastic volunteer appreciation lunches where patients attended and gave their testimonials for all to hear.

In all, we gave over 20,000 hours to our patients and had close to 1,000 volunteers. I’ve felt honored to have met and known these wonderful people, their stories, and their history. It hasn’t been easy all the time; it’s been physically challenging, mentally draining, and emotionally taxing. But it’s been worth it.

Again, our program was large and formal, but it consisted of many small, simple offerings of time and assistance and friendship. It consisted of things each of us can do formally through a volunteer program or informally for those in our lives already. That’s why I urge everyone to look around your neighborhood and watch over those who can’t watch over themselves. Watch over your seniors at church, in your family, and within your friendships. Ask if they need anything because most will never ask up front. Pride and a sense of losing independence can rear a head so ugly that sometimes the opportunity to help is missed before tragedy intervenes. Volunteer. It only costs $7 to $14 a day to feed a senior with Meals on Wheels. That delivery person is sometimes the only person a homebound senior will see all day. There are endless opportunities to make a difference: Eldercare, local community centers, hospitals. It’s so easy to give back, and your face at the door can bring a smile you will never forget.

Spending time with seniors and leading the homecare volunteers have been experiences that have enriched me forever and given me a chance to help those I have met along the way. I hope you have a chance to do the same. It will change your life.

Allyson Ledsam is currently the assistant for PLNU’s Department of Art and Design. Prior to her role leading Scripps Mercy Homecare’s volunteer program, she was a highly active community volunteer. She worked with the Junior League of San Diego on several significant boards, which included marketing for The Children’s Art Center of San Diego, supplying items for the first school on site for Father Joe’s new homeless shelter downtown, working with St. Paul’s elder care center, and developing in conjunction with Sharp Hospital and The Door Hope, the first employee-sponsored child care center in San Diego. She continues to raise funds with The Thursday Club for Balboa Park and the surrounding community, with Children’s Hospital Charity Ball for specific hospital designations, and with various America’s Cup committees. Her proudest volunteer effort prior to establishing the homecare program was working closely with Handicapped Services at UCLA to incorporate the first handicapped curb cuts within the UC system.

A Quest for Unity Between Artistic and Technical Endeavors: Jasmine L. Sadler