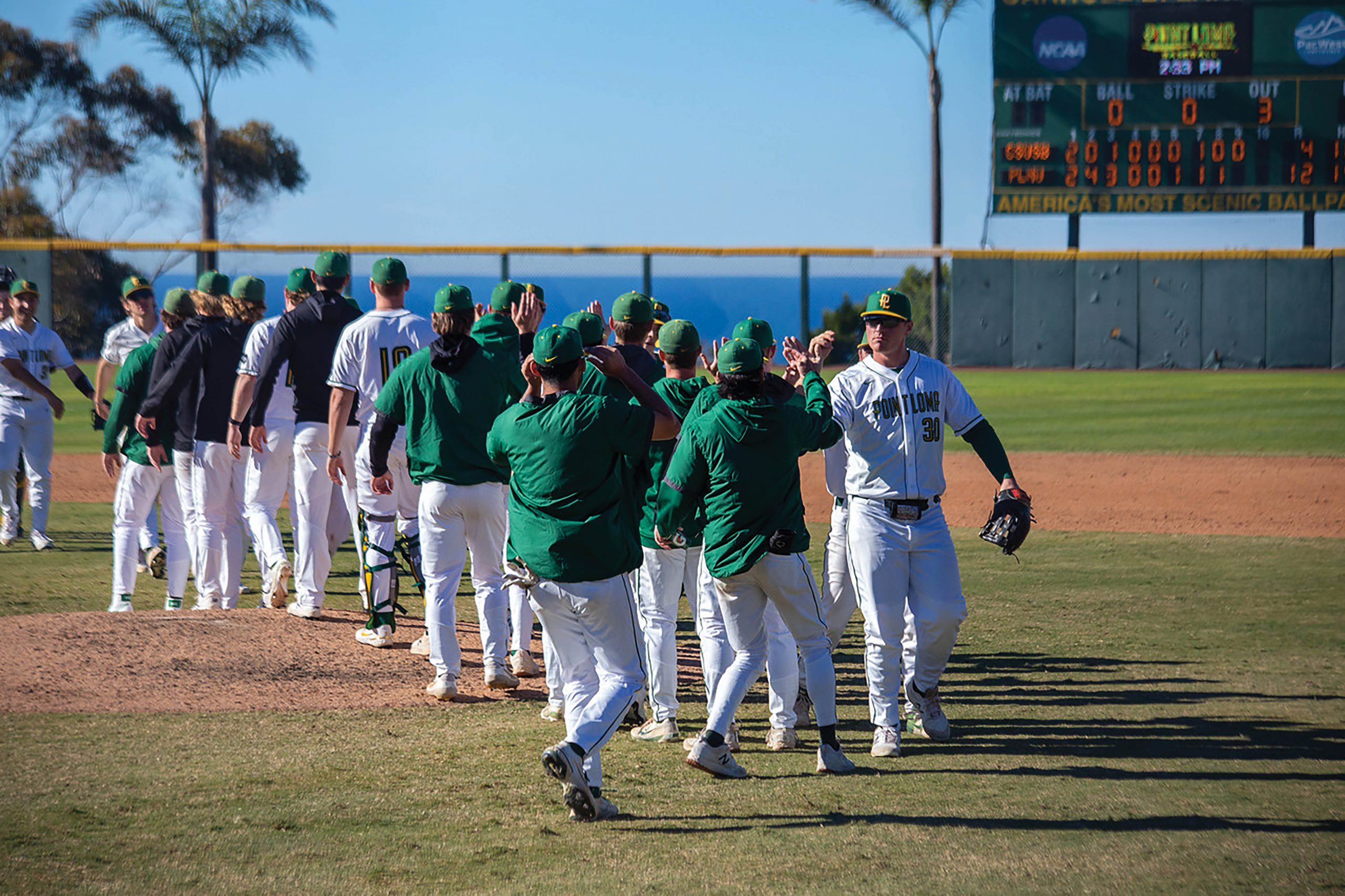 When taking in a baseball game at Carroll B. Land stadium, it’s easy to gaze out at the picturesque backdrop as a ball sails over the fence and appears to get lost in the Pacific Ocean.

For Point Loma’s baseball team, the real thing to watch takes place after the Sea Lion slugger rounds the bases and turns toward the dugout filled with 28 teammates ready to celebrate like they, themselves, were the home run hitter.

Pay attention to the dugout, instead of the ocean, and you will see one giddy teammate holding a white construction hat with an interlocking yellow “PL” stuck to the front. The smiling Sea Lion tosses the hard-hat to the home-run hitter as he approaches the dugout, discarding his functional batting helmet, which is complete with ear flaps that are graded to protect against blazing fastballs that come in north of 95 miles per hour.

After trading helmets, the smile spreads from one player to the next as those 28 Sea Lions show their appreciation for their teammate’s hard work by pounding on the top of the hard hat—and the attached teammate—in bursts of joyful yelling for a job well done.

It’s the Point Loma baseball version of the home run chain or sledgehammer or any sort of team-specific home run celebration that has become more popular and more acceptable as the “unwritten rules” from old-time baseball have given away to the zeal and jubilance of this generation’s ballplayers.

For this group of Sea Lion baseball players, it runs to the very core of who they are and why they are playing.

“I think it shows how much energy we’ve put into it,” sophomore shortstop Scott Anderson says. “When that helmet comes out, it shows how much zeal we all have. There is little to no better feeling than celebrating your guy when he does something great.”

Zeal is one of the three core values fourth-year head coach Justin James established for his program to embody a selfless culture.

“By definition, zeal is extreme enthusiasm towards a common goal,” Anderson recites with effortless but impassioned precision and deep understanding. “It is everyone being fired up to get after it in practice, give 100% in games, and everyone has the goal in mind of being a championship team.”

That championship goal is common to all teams, at least on the surface. But Point Loma’s emphasis, like the construction hat, is just different.

“To be a good team, you have to be a good teammate,” Anderson states. “For the guys who have been here a few years, we’ve been through tough times, games, seasons, practices. Still, everyone is bought into being a good team and teammate. I think we all have built this support system where everyone is ready to help out. That covers everything, whether it’s spotting in the weight room or flipping balls after practice. Simple stuff. Just being willing and ready to help the next guy.”

For PLNU baseball, that principle has already been embodied by the team’s leadership. Senior Easton Waterman caught 29 games for Point Loma in the spring but missed the first eight games of this season due to injury.

Peer into the dugout during those games and Waterman was often shoulder to shoulder with freshman backstop Jake Entrekin, who played all eight of those games in the senior’s place. At practice, the upperclassman can often be heard illuminating finer details while simultaneously competing in drills with the rookie.

“I looked up to a lot of older guys in my career,” Waterman says. “I know what it’s like to be pushed out, and I know what it’s like to have someone help you succeed. So, I know how important it is to look up to someone that you can talk to and ask for help. Team-wide that embodies why we are so successful. We have upperclassmen who have taken underclassmen under their wings. We care about this place so much, and we don’t want it to be good for just us. We want it to be good for a long time after us. We know our time is almost done, and the next group needs to care about it the same way.”

For the team’s upperclassmen, like Waterman and Anderson, the care for others and the program comes full circle to energize their approach.

“The more we thought about it, the hard hat embodies the hard work we’re built around,” Waterman reflected. “We consider ourselves to be a gritty group. That is our style of play. Getting our hands dirty and working hard no matter the situation. Battling through every pitch and every play. So the hard hat just stuck.”

The more we thought about it, the hard hat embodies the hard work we’re built around. We consider ourselves to be a gritty group. That is our style of play. So the hard hat just stuck.

It also helped that the Sea Lions bashed 16 homers in that first eight-game stretch of the season, putting the protective capabilities of the helmet to good use.

Point Loma’s start was great in other areas as well. The pitchers struck out 42 batters in the first four games. Anderson, along with third baseman Otto Kemp and pitcher/hitter Baxter Halligan, helped Point Loma earn a conference Player of the Week award in each of the first three weeks of the season as the Sea Lions got off to a 10-0 start, the best in school history.

Unlike the hard hat though, the Point Loma ballplayers and their coaches will tell you that success didn’t just appear.

“Last year was just a nightmare,” James told the San Diego Tribune after the 10-0 start. “You start questioning how you go about things. Are we doing the right things at practice? We decided not to change anything.”

The process that wasn’t changed was the preparation: 6:00 a.m. workouts, practice plans, and the approach to the game as a whole.

“In terms of how hard the players worked in the offseason,” James continued, “there were signs that these guys were a pretty good ball club.”

The commitment to the game plan extended to the core values. During the off-season, James handed out coins to the “Glorifier of the Week,” the person, not necessarily team member, who contributed the most towards making others in the program better.

One week it could be a selfless player, but it was just as likely to be a staff member who handled a difficult situation or a grounds crew worker who smoothed out an issue on the field.

The practice, like the player-created hard hat tradition, emphasizes Point Loma’s ability to celebrate each other and those around them for making each other better.

Ultimately, all of the celebrations dovetail into the Sea Lion’s other value of making “it” better. “It” refers to whatever the situation, game, season, or life may throw in front of the team.

The emphasis that comes back for PLNU baseball is not to see the situation as an obstacle, but to realize the work that needs to be done to overcome. And that process, while unique to the team that inhabits Carroll B. Land Stadium, is common to the vision for the entire Point Loma Athletic Department set out by athletic director Ethan Hamilton.

“The spiritual piece and the growth that we are seeing is who we are,” Hamilton said of the department’s focus on personal development through each of the individual teams. “I think our programs do a good job. We want to give them some autonomy to be creative. Each team does something different and has a different ministry that they are attached to.”

The spiritual piece and the growth that we are seeing is who we are.

The idea is to have the values help the student as student-athletes use what means the most to them and then return the values of teamwork and discipline into the community.

“Each team has different core values, and that is driven by the individuals that make up our teams. We still have values collectively, too, but we want to listen to the student-athletes and make sure that the values and causes are more personal to each of the student-athletes.”

For Point Loma baseball, the commitment to helping those around them is displayed in their celebrations of each other. And those celebrations have caught plenty of attention with the terrific start to the season, even grabbing the cover story on MLB.com in March, which highlighted America’s Most Scenic Ballpark.

While the successful start was never the end goal, the Sea Lions are already reaping the rewards of their hard work. The full product of what Point Loma is creating isn’t completely in view yet, but they continue the lunch-pail type of approach.

And the picture that’s coming into focus has been beautiful so far.