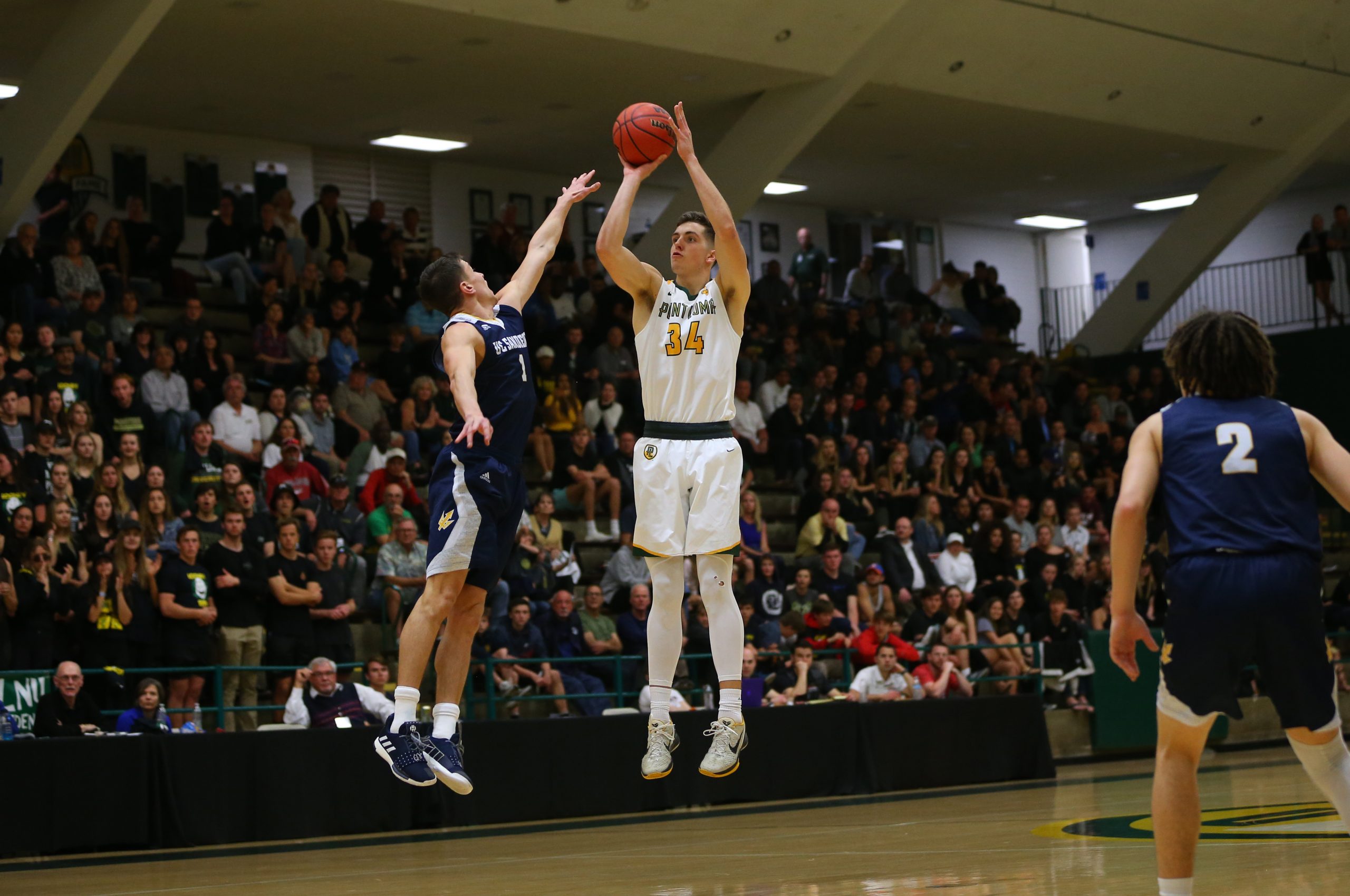 The story of Hommes’ rise to the national player of the year began in the Northwest. He was a standout at Lynden Christian High School as a sophomore and began to catch the eye of some NCAA Division I programs. Then, his junior year, he tore his ACL in summer ball. He worked tirelessly with hours of rehab over the next year to be ready for the start of his senior season.

When he tore the same ACL in the first practice of his senior year, he had to rehab all over again in order to keep his dream of playing college ball alive.

The timing of these injuries could not have been worse for Hommes as he missed out on all the opportunities to be seen on the court by the colleges that had once been recruiting him. The one positive thing going for Hommes at this time was that he had grown nearly eight inches in the past two years and now stood as a 6’8” wing player that could handle the ball.

He spoke with multiple coaches throughout the Northwest, including Point Loma’s former head coach Ryan Looney when he was with Seattle Pacific, but he decided to attend Western Washington University, which was located just 20 miles from his hometown.

When he tore the same ACL in the first practice of his senior year, he had to rehab all over again in order to keep his dream of playing college ball alive.

After taking a redshirt year as a walk-on freshman to make sure the knee was completely at full-strength, Hommes began to dominate on the court. Averaging 12.5 points and 6.4 rebounds per game, he earned honorable mention All-Great Northwest Athletic Conference honors as a redshirt freshman. His first-ever collegiate basket was a dunk against future No. 1 NBA draft pick and current Orlando Magic player Markelle Fultz of the University of Washington.

He would take a big step forward as a sophomore. Named to multiple all-region teams, Hommes was a unanimous All-GNAC selection after averaging 18.1 points and 6.0 rebounds while shooting 44.6% from 3-point range.

Hommes transferred to PLNU in his junior year. His first basket in a Point Loma uniform was a driving, one-handed dunk in traffic, and his season only got better from there.

Hommes would help lead the Sea Lions to their first PacWest regular season and PacWest tournament titles and a school-record-tying 31 wins. He averaged 21.9 ppg while shooting 53.3% from the field and 47.0% from 3-point range. But his most memorable moments, for both himself and PLNU, came during the Sea Lions’ incredible run in the NCAA West Regional.

The best moment I had was jumping up on the scorer’s table and then hoisting the trophy. Just filling up the gym and having the entire student body behind us is something I will never forget.

Point Loma earned the No. 1 ranking in the region and the right to host its first basketball regional in school history. First, they downed No. 8 seed Western Oregon 70-58 in front of a student section that was entirely decked out in white. The next night the fans came back for a blackout themed night against crosstown rival and No. 4 seed UC San Diego. The Sea Lions easily won, 73-50. Hommes dropped 27 points that night, including five 3-pointers to send PLNU to its first regional final. In the final, he scored 25 of the Sea Lions’ 60 points, including hitting three crucial 3-pointers in the second half right in front of the Green Sea. When the final horn sounded, his teammates leapt for joy on the court. Hommes, meanwhile, hopped up on the media table to celebrate the moment with the fans.

“The best moment I had was jumping up on the scorer’s table and then hoisting the trophy,” said Hommes. “Just filling up the gym and having the entire student body behind us is something I will never forget.

“The next week I was in one of my business classes and one of my classmates came up and thanked me for giving him the college sports experience as a fan that he always wanted,” Hommes continued. “It was great how we were able to unite the student body in that gym.”

He would go on to be named the MVP of the West Regional and lead the Sea Lions to the Elite Eight in Evansville, Indiana. Point Loma surprised everyone in its first game as it upset the No. 3 seed, Queens, to move on to the Final Four. The next day the Sea Lions knocked out the hometown team, Southern Indiana, in front of a hostile crowd of nearly 6,000 fans. Hommes continued to hammer down dunks and sink shots well beyond the 3-point line throughout the first two games. This set up Point Loma’s first-ever appearance in an NCAA Championship game.

The NCAA Division II National Championship game was broadcast nationally to over 1.7 million fans on CBS. On the PLNU campus, more than 700 Point Loma fans gathered in Nicholson Commons to watch the championship game, the majority clad in Green & Gold. The men’s basketball team hung in the championship game until the final minute against an undefeated Northwest Missouri State team, before falling 64-58, in the best postseason run in Point Loma and PacWest history.

“I view my time there as a stepping stone for the program,” explained Hommes. “What we did and the run we made will go down in the history books, but I want to see those records broken and for Point Loma to host the West Regional again. I want to fill up that gym again and just keep building on what we did last season.”

And that is the pride Hommes takes in his time at PLNU.

“When I think of Point Loma, the first thing that comes to my mind is: that is home,” said Hommes. “I feel like PLNU was home for me even though I was only there one year.”

After the run, the word was out on Hommes. Although he had been getting scouted throughout the season at each game by NBA teams, he was now being presented options and offers to continue his game beyond college. Hommes officially declared for the draft on April 8, 2019, with one year of college eligibility remaining and decided to jump with both feet into the draft process.

Although Hommes was not selected, he was signed the next day by the Milwaukee Bucks. Hommes played five games with the Bucks in the NBA Summer League, averaging 8.4 points in 17.8 minutes per game. He shot 14-of-25 (58.0%) from the field, 7-of-15 (46.7%) from 3-point range, and a perfect 11-of-11 from the free throw line. In his first summer league game, Hommes came off the bench to score 18 points in 26 minutes. He shot 6-of-8 from the field and 3-of-3 from 3-point range. Hommes made some great moves, including multiple step-back jumpers and a hammer dunk on a fast break. He also played the entire fourth quarter, scoring eight of his 18 points. However, at the end of the summer league, due to some other signings on their NBA roster, the Bucks released Hommes and he signed with the San Antonio Spurs.

Hommes received an Exhibit 10 contract, securing him a spot at training camp and with the Spurs’ G League affiliate. He went through the entire training camp with the Spurs, playing in four of the five games, but when the Spurs had to make decisions to get their roster down to 17 before the start of the season, Hommes was the 18th man. He was told he’d been assigned to their G-League affiliate team, the Austin Spurs.

Some nights you’ll get 20 minutes, and some nights you won’t play at all. For me, it is just staying ready at all times and about being a professional.

“Training camp was really challenging, but also a lot of very cool moments,” he said. “Looking back it was a huge learning experience. Just having the opportunity to go through those preseason games allowed me to build confidence and keep growing within this organization.”

The Austin Spurs began their season on Nov. 8, and Hommes was in uniform. In his first game against the defending league champions, Hommes dropped 15 points and pulled down four rebounds in 23 minutes. Since then, the Austin Spurs are currently in line for a playoff spot with a 15-10 record.

“It is a day-to-day thing for me right now because we play so many games,” Hommes explained. “Some nights you’ll get 20 minutes, and some nights you won’t play at all. For me, it is just staying ready at all times and about being a professional. Those are the things that the coaching staff has continued to work with me on.

“I am also continuing to work on my jumper and all parts of my game, including rebounding and defense, and just playing the Spurs’ way,” he continued. “I think I am in a great spot here with the Spurs. I’ll continue to grow in this organization.”

The Hommes Legacy at PLNU Continues

Hommes continues to stay close with his former teammates, and he even had a chance to get to know new head coach Matt Logie and his staff when they came in last April.

Hommes’ sister, Torina, joined the Point Loma volleyball team as a freshman this season. She played in all 30 matches, making multiple starts while averaging 2.14 kills as an outside hitter. “Just being a part of the PLNU family is very special,” Daulton explained. “I am very excited for her as she continues to grow, get better, and have success. I will continue to support her and the Point Loma volleyball team going forward. It’s a family thing now.”

Turning The Tide: Ensuring A World With The Ocean For Future Generations