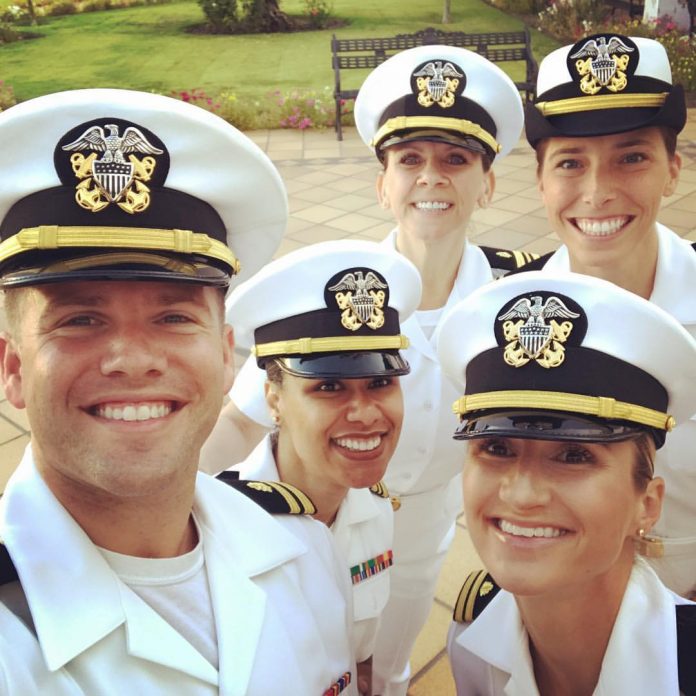 Womack is currently working on the labor and delivery floor — as one of two clinical nurse specialists — at a large military treatment hospital in Portsmouth, Virginia. As a perinatal clinical nurse specialist (CNS), he also regularly helps out on the postpartum floor. He graduated in May 2020 with his Master of Science in Nursing (MSN) from Point Loma Nazarene University and began his utilization tour in October.

“I enjoy labor and delivery because it is one of the places in a hospital where you get to be part of somebody’s extremely special time in their life,” he said. “Having to quickly establish trust with someone else and then guide them through their inpatient journey — that’s one thing that I’ve always enjoyed about nursing; I find it extremely fulfilling.”

Womack’s journey to becoming a nurse began when he was young. His father and aunt were professional nurses and he grew up listening to their stories from work.

“I have always aspired to be the kind of nurse that my dad was. He was always so well-received with all the teams that he’s ever worked with or any of the jobs he’s ever had,” Womack said.

From the time he began college, Womack knew he wanted to work in the medical field. He worked as an ER registrar in Starkville, Mississippi, when he started his bachelor’s degree work. He originally wanted to go into healthcare administration and bypass the clinical aspects associated with nursing. However, the longer he worked in the emergency room, the more Womack realized how much he admired the clinical competencies and critical thinking skills of nurses. He saw how nurses worked autonomously, responded analytically to various situations, and got to engage in raw human experiences. The result: he decided to pursue a nursing career.

Womack graduated nursing school with his BSN in May 2012 from the University of Alabama at Birmingham. After nursing school, he went to officer development school for five weeks and began his Navy career. Since then, his entire nursing career has been in the Navy Nurse Corps.

Senior nurse managers and leaders began to ask him if he had considered earning an MSN. The clinical nurse specialists he worked with introduced him to the idea of applying for a Navy Duty Under Instruction (DUINS) program that allows active-duty military personnel to obtain an advanced degree while serving.

“Early on, I had identified I wanted to do DUINS because it’s a great program,” Womack said. “The Navy pays for your graduate school and you’re still considered active-duty, so it counts toward your active duty time.”

“Early on, I had identified I wanted to do DUINS because it’s a great program. The Navy pays for your graduate school and you’re still considered active-duty, so it counts toward your active duty time.”

His nursing mentors in the obstetric community gave him opportunities that would help make him more competitive during the application process. He applied and got accepted into PLNU’s Navy DUINS program. When he completed his duty in Spain, he went to San Diego in the fall of 2018 and began the next phase of his nursing journey: earning his MSN degree.

“The reason I applied for Point Loma is twofold,” he said. “One, is that Point Loma has a really good reputation that precedes itself in the Nurse Corps Community.”

At PLNU, Womack was one of three in a cohort of DUINS students. Professor Angelica Almonte, who was a retired captain in the Nurse Corps, understood how military medicine worked and took time to develop relationships with Womack and his cohort members. “She also did DUINS when she was in the Nurse Corps so she understood what we were going to do,” Womack shared. “My experience with her was very meaningful as a DUINs student — to have a professor who understood what I was going through.”

Womack was completing his final semester of the program and had over 100 clinical hours left when hospitals began shutting down due to COVID-19. The MSN students were worried they wouldn’t meet the requirement and be able to graduate. However, several clinical professors stepped in with innovative ideas.

“Another reason why I love Point Loma is the faculty-to-student ratio. My clinical professor who was in charge of getting me placed for my clinical hours really helped out in finding very non-traditional ways of getting me CNS hours,” Womack said.

“I can’t imagine many places will be able to give you the quality education that you get at Point Loma — with that kind of faculty-to-student ratio. I think that is paramount.”

Two nursing instructors, Jen King (DNP, RN, CNS) and Mary Adams (Ph.D., RN), provided Womack with several opportunities to get clinical hours. He participated in a qualitative study about front-line nurses interacting with COVID-19 patients, and he helped organize a massive COVID-19 testing for over 5,000 students and faculty members. He also assisted with nursing tasks related to the BSN program.

While COVID-19 negatively impacted hundreds of thousands of patients and medical professionals, Womack gained hands-on experience in the field by learning how “a CNS in a hospital would prepare for a surge during a pandemic.”

“If COVID-19 didn’t happen, I would have just finished off my clinical hours on a labor and delivery unit with a perinatal CNS,” Womack shared. “I still would have learned a lot, but I wouldn’t have had the real-life opportunities that COVID-19 provided.”

Womack has put in a lot of hard work throughout his journey as a nurse, from serving in different countries to devoting many years to advancing his education. Now that he is working as a CNS in the Navy, he is able to practically apply what he learned in his courses as well as what he learned in his hands-on experiences.

When reflecting on the past few years of his nursing journey, Womack expressed gratitude for the experiences he had with his MSN cohort and professors. “I can’t imagine many places will be able to give you the quality education that you get at Point Loma — with that kind of faculty-to-student ratio. I think that is paramount,” he said.

The views expressed in this article are those of Point Loma Nazarene University’s CNS alumni correspondent and do not necessarily reflect the official policy or position of the Department of the Navy, Department of Defense, or the U.S. government. The correspondent has disclosed that he has no significant relationship with, or financial interest in, any commercial companies pertaining to this article.