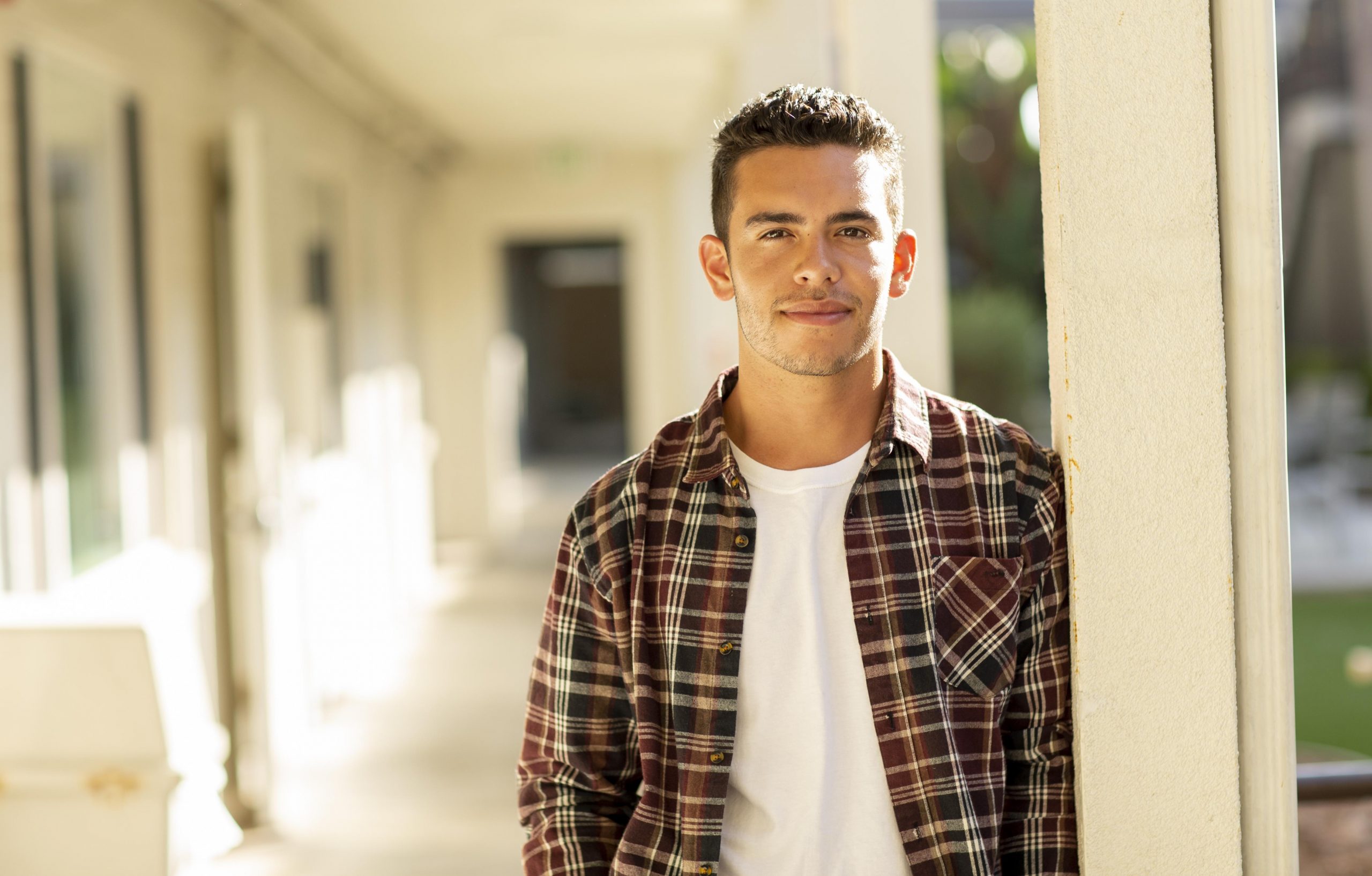 At PLNU, students from all majors, programs, and areas of study pursue career paths that fit within the upstream approach in a number of ways — directly and indirectly — to address social, racial, economic, environmental, and other implications.

Within PLNU’s School of Nursing, students are specifically trained to understand the upstream approach and how social determinants affect their work from the basic level of individual patient care to the entire healthcare system and governmental policy.

For Elias Escamilla (20), the desire to find his place within the upstream approach and get as close as possible to the root of people’s health is what drew him to nursing in the first place. Furthermore, being able to merge his faith and calling to better serve others is what led him specifically to study at PLNU.

From a young age Elias (or Eli) knew he wanted to work closely with people and make a bigger impact. “I remember getting really interested in healthcare,” he recalls, “but not really feeling like I was landing on one specific area.”

In his junior year of high school, Eli participated in a mission trip to Chile, where, hearing stories of people traveling extreme distances to go to the hospital, he began noticing the disparities people all over the world face in accessing quality, affordable healthcare: “I began to compare that to my own situation here in the U.S., and I felt like I could maybe one day bring some of that to those that need it most,” he said.

Still unsure where he wanted to specialize, Eli followed the suggestion of his parents and enrolled in several extracurricular healthcare programs, where he was exposed to various aspects of health. That’s when he first learned of the upstream approach.

“Finding out that your zip code was more indicative of your health outcomes than your genetic code blew my mind,” he said, “that city planning, water, resources, and all these things could affect how long somebody lives. And that’s where I thought, ‘What’s the most good that I can do in this world of medicine’ and it was wanting to be on the top of the stream.”

Eli began looking for reputable nursing schools when his guidance counselor told him about PLNU. The draw of staying in San Diego and developing his faith within a Christian liberal arts community was enough for him to give it a shot. After attending a preview day on campus and staying overnight in the dorms, Eli was convinced it was the place for him.

“I remember this distinct moment that I almost took a mental picture of,” he recalled. “All the people in Klassen Hall went down to the beach and jumped in the water and ended up hanging out in the hallway until late at night. I felt that connection and community and thought, ‘Yeah, these are my people’ … It felt more like coming into a home than just going to a college, and it felt like a great place to spend my next four years.”

“It felt more like coming into a home than just going to a college, and it felt like a great place to spend my next four years.”

Living on campus the following year, Eli continued to feel that same person-first care in all areas of the PLNU community. In addition to what he was learning in his nursing courses, this also influenced the activities in which he got involved, leading him to sign up for seemingly every opportunity PLNU had to offer: Spring Break Build and Ministry With Mexico his first two years, serving as a resident assistant (RA) his junior and senior years, going on a LoveWorks trip to Jamaica the summer in between, speaking in chapel, playing intramural sports, and carving out time to surf, organize camping trips, and experience fellowship over coffee with his hallmates, residents, and friends.

“I knew that it was a once-in-a-lifetime kind of experience,” he said. “I didn’t want to finish school and regret not getting involved.”

As Eli felt more at home in the campus community, the original question of what he wanted to do in nursing persisted. Comparing himself with his peers, Eli felt there were so many others who seemed far more convicted in their calling, who came from entire families of nurses or knew they wanted to be a nurse their whole lives. “It was hard sometimes seeing other people really, really happy about what we were doing, while I was still asking, ‘Well, do I know that this is what I want to do?’ And with each new semester, I thought, ‘This is where I am going to find my calling.’ And by the end, I would always feel, ‘Oh, man I don’t think I can do this.’”

Compounded with the number of students focused on the traditional inpatient route toward the hospital, finding his place within the upstream approach continued to elude Eli.

Senior year, graduation, and the future were quickly approaching, and Eli knew he had to find help. He spoke with professors from a variety of backgrounds and was ultimately directed to Kris Lambert, Ph.D., professor of nursing and psychology. Though he hadn’t studied with her yet, he was scheduled to take an upper division community health course with her his final semester. The course particularly focused on mental health — Lambert’s specialization and the reason he was directed to her — and she hinted at some of the topics they would cover. “

He came to me initially in this existential crisis,” Lambert recalled. “He said, ‘what have I done? Did I just waste four years? This is not what I thought.’ We broke it down and I remember saying to him ‘There’s a whole other part of healthcare that you haven’t even considered yet.’”

Eli remembered Lambert saying to him, “‘Wait, we’ve got one more semester left. You’re going to get to experience mental health and community health next semester, and more than likely, you’ll fall in love with at least one of those.’” He recalled, “And sure enough, jumping into that last semester was the most exciting semester of nursing.”

Eli was placed on rotation in a psychiatric intensive care unit (ICU) at a local Sharp HealthCare facility, where he finally had the chance to combine his passion for patient centered care, hear people’s stories and backgrounds, and connect that with the larger upstream implications of mental health.

Lambert also remembers noticing Eli’s passion for the work and his change of outlook: “That’s when he said, ‘this is my deal, this is my jam. This is who I am.’”

Unfortunately, this occurred during the spring semester of 2020, when COVID-19 was quickly spreading across the globe and spiking in the U.S., forcing PLNU and all of higher education to transition to virtual instruction.

“Even with just that little bit of time I had,” Eli said, “it was enough to give me a sense of hope that there was more.”

Despite classwork and lectures continuing virtually over Zoom, the person-first support Eli appreciated so much about the PLNU community remained the same, with faculty frequently checking in on how students were doing.

“There were moments in some of our classes where professors would kind of shut the door and say, ‘Hey guys, talk to us; what’s going on? How do you guys actually feel?’”

As his peers began opening up about life after graduation and finding a job amidst rising unemployment numbers, Eli finally began to hear others speak out about their struggles to find their place in nursing and the traditional inpatient route.

“It was so hard because it was halfway through the semester,” Eli said, “but having other friends who had similar types of feelings made me feel like I wasn’t alone.”

Lambert, who has spent the past six years working to develop the PLNU School of Nursing Resilience Program, utilizing techniques developed in conjunction with the University of Massachusetts, Amherst and Northwestern University, understands the need for nurses and nursing students to manage the stress and anxiety that comes with the nursing profession.

“The program focuses on building resilience capacity in each of our students as a way to ensure they’ll continue to grow and thrive as future healthcare providers,” she said. “We have to teach people to be resilient. If we don’t help students learn how to navigate difficulties within their personal and professional lives, when someone like Eli comes along — a person filled with passion to make changes within our broken system — they may find themselves a victim of burnout and empathy fatigue.”

That same passion and empathy Lambert saw in Eli, however, convinced her that mental health could in fact be the route for his career, and where he could begin working up the stream. Through Lambert’s connection to Eli’s rotation clinic, as well as other PLNU alumni working within the network, Eli interviewed for a permanent opening that would end up becoming his first postgraduation job offer.

In July 2020, Eli graduated in PLNU’s adapted drive-up Commencement ceremony, receiving his diploma from President Brower in cap, gown, and mask as his family cheered from the top of the Greek Amphitheatre. Within six months, Eli concluded the training portion of his job and has begun transitioning to independently caring for patients. Lambert has made sure to check with her connections to see how he’s doing in his new role, and she knows he’s in the right place at the right time to continue moving up the stream.

“Once Eli understood the important role social determinants play in health of individuals in the community, the more focused he became on being a part of a movement invested in advocating for people regardless of background or the current circumstances they may find themselves in,” she said. “He needed that foundation, and I have a feeling he’s going to be that guy that gets into the community and makes that change happen.”

Both Lambert and Eli mentioned the strain of COVID-19 on mental health right now, in addition to the existing disparities the pandemic has exposed within the healthcare system and the inequities suffered by marginalized communities of color and lower income. While Eli also begins seeing the impact of his work in context of the upstream approach, he knows he has more to learn, but he’s also optimistic of the broader coalition of fellow PLNU graduates as they enter the stream as well.

“Coming to Point Loma and connecting with other like minded people from all different disciplines, I was making friends who are now teachers, or who are going on to medical school or ministries, becoming dieticians or psychologists, or going into social work and doing really difficult things and hearing really hard stories,” Eli said.

The number of fellow PLNU students collectively pursuing their unique callings and career paths to serve others convinced Eli that he was part of a large movement traveling upstream to make deeper, collective change. “I think the way PLNU develops you as a person who cares about others, and seeing how everything is connected, that’s the way that the upstream approach is connected,” he said, “seeing root causes and working to be an impactful person.”

Eli knows the questions he has about his place in nursing haven’t entirely subsided. No matter where he continues to go, however, he knows the knowledge and experience he gains with every subsequent step will help him further discover his calling and his path upstream.

“I don’t know if I see myself in mental health forever,” he says, “but I think for now, I feel like it’s as true to me as I can be.”