Home Topics Arts & Culture “To those who had something to say, but couldn’t find the words.”... 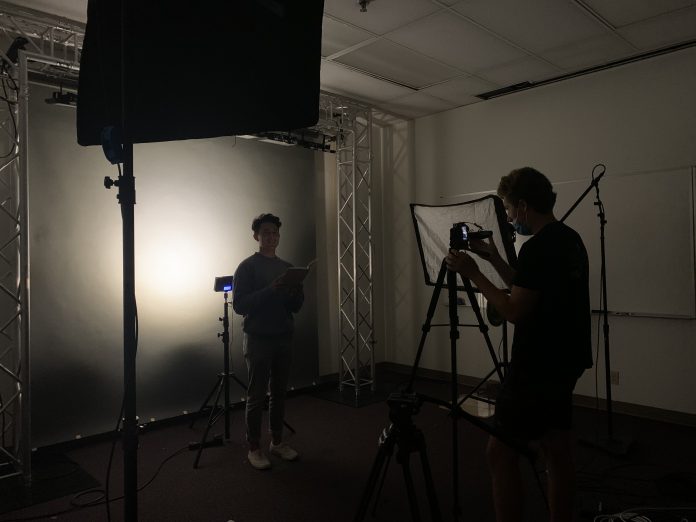 During the fall 2021 semester Jaclynn Pineiro, a third-year nursing student, enrolled in a LIT 2000 general education course. Little did she know that, beyond fulfilling a GE requirement, she’d help write and publish a complete short novel.

PLNU’s general education (GE) literature class teaches students the basics of writing mechanisms, research and citing sources, and synthesizing arguments. However, during the fall 2021 semester, professor Eddie Matthews, Ph.D., (14), decided to switch things up and offer a new learning experience for his students.

In the eight-week LIT 2000 quad course, Matthews tasked his students with the assignment of producing, writing, editing, and publishing a book.

“Why I keep going back to literature is that you see the interiority of people’s lives and you just don’t see that anywhere else,” Matthews explained. “You might see the interiority of someone’s life in a spouse or if you have kids or have a really good friend, but that’s just a small handful of lives that you can really get to know. The idea of creating a book as a class was trying to access whatever [the students] were passionate about, whatever skill set they had, and then build that into the process of making this book. [I’m] trying to create a venue for students to realize books are the culmination of all of these skill sets and what you have in your hands is the interiority of someone’s life that’s worthy of your intention.”

Originally toying with ideas of poetry and even a “how-to” dance guide, students ended up settling with an idea brought up by Pineiro that resonates with Matthews’ description of “interiority.”

“I was thinking [of] letters because the intention was to get off a weight of words that you’ve kind of always wanted to tell someone but just have never had the guts to,” said Pineiro. “They’re all anonymous; it could be that short or a lengthy love letter to your ex. [It’s] the bearing of words they never told someone.”

The product of Pineiro’s idea is Dear Anybody but You, a collection of anonymous letters from students, family members, and friends.

From nursing majors to marketing majors, each student was paired into different teams based on their skill sets to cover writing, editing, marketing, operations, and graphic design. As the project went on, for Pineiro, it took on a more significant meaning.

“It was on my heart to say some things to certain people but I just couldn’t,” said Pineiro. “I feel like everyone’s always wanted to tell someone something but just hasn’t. I feel like this would be a way to help people write the letters and not send them, or write them and send them.”

The book covers a wide range of emotions and experiences that often introduce and encourage a dialogue revolving around mental health. After looking through it himself, Matthews believes this book offers insight into the lives and hardships of college students that often go unspoken.

“I hope that these readers, whether they’re fellow students; family members; or people that have never come across PLNU, I hope that something they take away from this book is how rich, developed, difficult, and complicated these students’ lives are even though they’re only 18, 19 20 …” said Matthews. “There’s this false misperception that students have it easy or their lives are simple and uncomplicated and college isn’t the real world. You have no idea what some of these people have been through already.”

There’s this false misperception that students have it easy or their lives are simple and uncomplicated and college isn’t the real world. You have no idea what some of these people have been through already.

Matthews came about the idea of this new assignment as a response to the COVID-19 pandemic and also because of a natural desire to engage his students.

“This semester was the first time I was teaching in person since fall of 2019, so it had been two years,” said Matthews. “I wanted to experiment a little bit and try to improve upon what I did before and get students in movement. This was a way to energize the students and break up the monotony that school can sometimes be.”

Likewise, after experiencing the year of 2020, Pineiro felt this project was pertinent.

“Over the pandemic I found journaling to be really therapeutic because I couldn’t always talk to some people about some things,” said Pineiro. “They were going through their own problems so I needed to get my own problems out in a way. Journaling to myself was really good, and so I got into letter-writing essentially while journaling.”

For Matthews, this project was assigned not only with the intention of teaching students how to produce a book, but to practically show them they have both valuable skills and perspectives to offer.

“Ultimately, what I’ve hoped that they’ve learned is that, very fundamentally, they have something to contribute,” said Matthews. “They have a certain skill or expertise that is needed and applicable. You think of a book strictly [as] something almost akin to art or something humanistic, but a book is also a product you can sell, it has to be designed well. [It’s] a culmination of so many industries. What I hope they have taken away from this is that in any sort of project or organization they come across, there is so much room for imagination and creativity and connection with what they feel they already know how to do.”