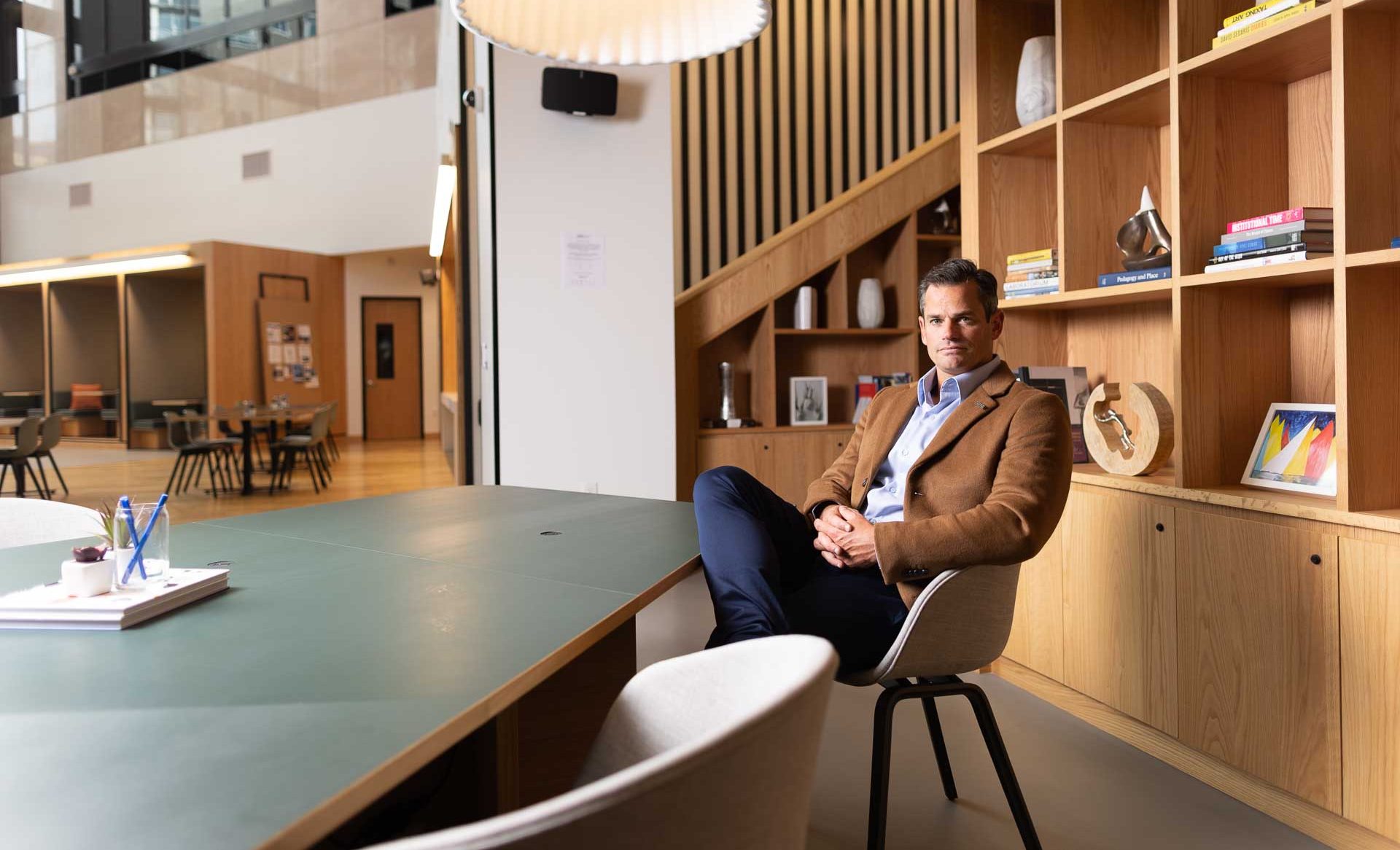 When Travis Carter (06) first stepped foot onto Point Loma Nazarene University’s campus, he couldn’t foresee how the next four years would profoundly change his life. Fresh out of high school, he was looking for something different. He’d grown up in Temecula and played organized sports, but there was something about the location and the people that drew him to San Diego.

“I was so curious with surfing and the beach,” Carter recalls. “Maybe being so far away from it, it felt like that’s where things were happening.” He adds that PLNU’s size and its supportive network were also influential factors.

By his senior year, Carter had familiarized and actively sought out opportunities to immerse in the community. “Every year I’ve gotten closer to the community of San Diego, I’ve gotten more obsessed with San Diego.”

That sense of building community and creating interpersonal relationships continues to inform his daily life and his current business venture, Carter+Co., a commercial real estate firm he founded in January 2022.

The impetus that birthed Carter+Co. arose from Carter’s experience working for a previous firm that utilized a tenant-first model. After observing trends in the market and considering the current state of real estate, he saw an opportunity to also go against the grain in addressing a problem he observed.

As Carter explains, residential real estate experienced a seismic shift when companies like Zillow and Redfin decided to buck the traditional model — primarily male-dominated and focused on maximizing profits with landlords as controlling market gatekeepers. Picture Mad Men and its associated toxic work culture, but centered around residential real estate instead of advertising. By transitioning to an open platform, these companies created a more attractive and practical approach to engaging with clients directly.

In comparison, commercial real estate has been slower to adopt such an approach. And Carter wanted to change that. Removing landlords from the equation and being transparent with clients was a priority.

It all boils down to “a greater need for customer service,” Carter explains. He compares his company’s approach to how the food service and retail industries strive to achieve customer satisfaction.

Part of the day-to-day operations for Carter and his team centers around interpreting data, taking stock of available resources, and presenting packages to clients in a clear, easy-to-understand manner. In addition, by not including landlords in the mix, Carter notes there’s no conflict of interest when it comes to determining what options are best for the client’s commercial real estate needs.

Similarly, the Times of San Diego reported in March 2022 that lab real estate rent averages had approximately doubled within the past five years. These rent hikes partly correlate to the rapid hiring rate of specialists in this area and the need for available lab space, according to market research by the U.S. Bureau of Labor Statistics and real estate investment firm Coldwell Banker Richard Ellis, respectively.

Carter — who’s worked directly with clients in each of these fields, as well as those working in manufacturing or requiring creative office space — acknowledges how climbing inflation rates and funding in the tech and life sciences fields have affected the area. But he believes San Diego will rebound.

The city’s proximity to Mexico and the specialized talent that local tech, defense, and medical companies recruit from there and around the United States continues to be positive growth factors, he explains. In addition, San Diego’s culture, lifestyle, ethnic diversity, and higher education opportunities have the potential to continue attracting companies and workers to meet the demand in these fields.

“In this town there’s this sense that if you plant good seeds, good things are going to happen. There are lots of people planting a lot of good seeds and doing things the right way. I think that is going to yield benefits for generations to come.”

“The make-up of San Diego is a very diverse town,” Carter described. “There are over 200 languages spoken within a one-mile radius of downtown. It is insane and it is a melting pot of people who like to be here for the same reasons. I like to be a part of that diversity and change in commercial real estate.”

By leaning into San Diego’s culture and diversity, Carter+Co. also humbly honors Carter’s connection to PLNU and surfing through its branding and business cards. In recent years, Carter has been involved with the local surfing scene and served PLNU’s award-winning surf team as a co-coach — or, more affectionately, as a “surf dad,” he joked — alongside fellow PLNU graduate Andrew Niemann (19).

When approaching company branding, Carter explained: “I wanted the company to be cool. It has to be cool just like San Diego. I like how seafoam green matches with gray and with black and with white, and cleanness and simplicity. All those characteristics I feel were reflected in the brand and the image that we’re trying to portray to our clients and how we want the process to feel.”

These characteristics inform Carter’s short- and long-term goals for his company, particularly in assisting customers, growing his team to cater to more clients, and giving back to the community. He hopes that Carter+Co. eventually grows to be a prominent, if not the preeminent, client-focused commercial real estate firm in California.

Image alone, though, is not enough to run a successful business. Carter reiterates the need for respect and integrity.

“You can’t be successful without doing the right things. In this town there’s this sense that if you plant good seeds, good things are going to happen. There are lots of people planting a lot of good seeds and doing things the right way. I think that is going to yield benefits for generations to come.”