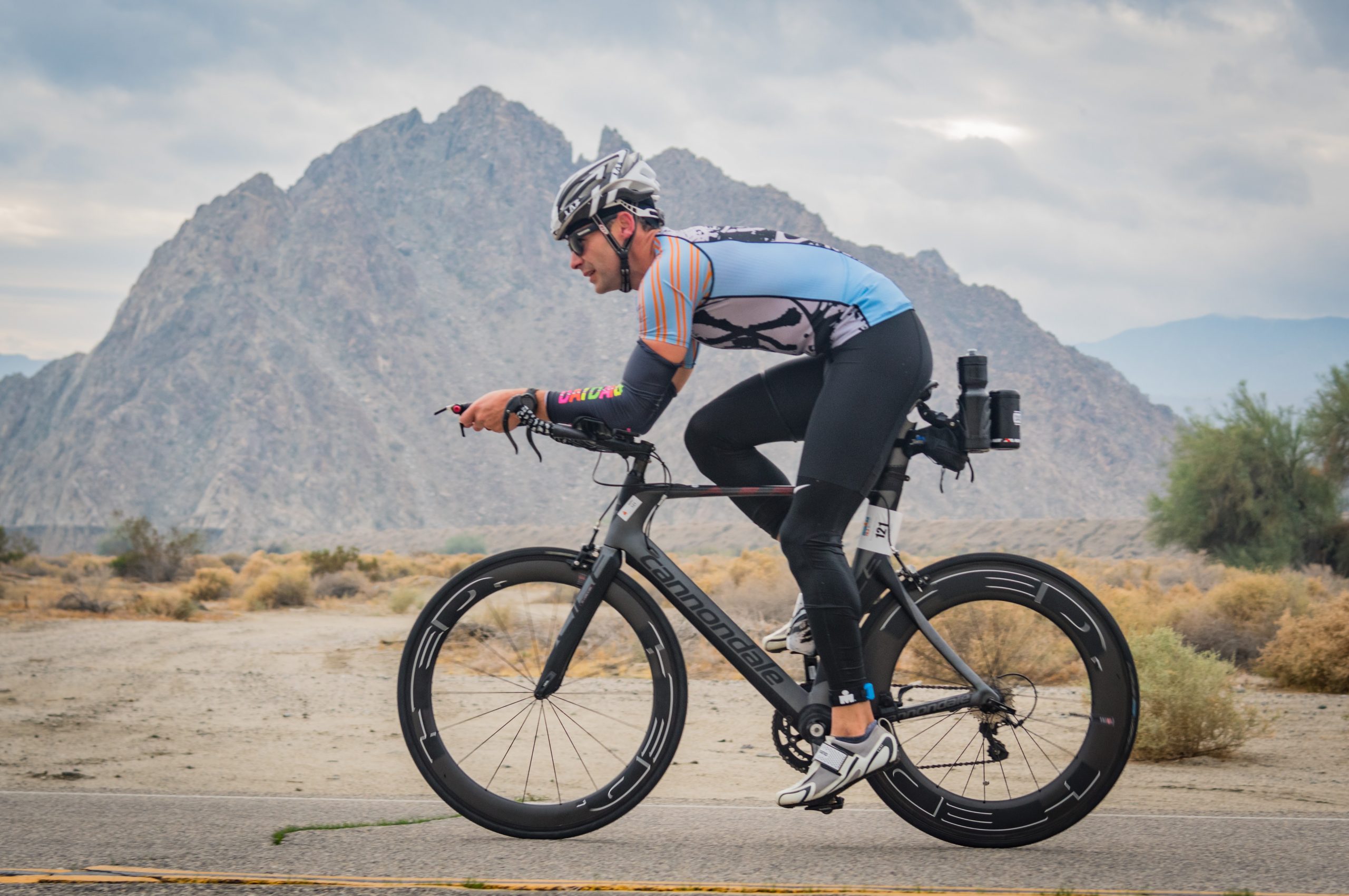 There was a time when running a single mile left Marvin Milian exhausted. But those days are long past for the adjunct professor of art history who is currently training for his fifth Ironman triathlon.

“When I first started training, I ran one mile because that was the length around my local park,” he said. “I was too tired to run back home, so I had to walk.”

Growing up, Milian had admired the triathletes he watched on television competing in the Ironman World Championship in Kona, Hawaii. An Ironman triathlon consists of a 2.4-mile swim, 112-mile bike, and 26.2-mile run. He liked to pretend to be a triathlete, but he viewed them as almost superhuman.

“I thought it was for someone else, for elite athletes,” he said. “Now I try to help do away with the stigma that Ironman finishers are machines or elite athletes. Anyone can be an Ironman. Everyone should be able to hear that.”

Now I try to help do away with the stigma that Ironman finishers are machines or elite athletes. Anyone can be an Ironman. Everyone should be able to hear that.

Since that first, difficult mile, Milian has lost 70 pounds through his training. His first triathlon was an Olympic distance – a 0.93 mile swim, 25 miles bike, and 6.2 mile run. After completing it, he decided to sign up for his first full Ironman. He’s been at it for seven years, and his long-term goal is to have a chance to compete in Kona. There are several routes to qualify, and Milian is aiming for the one that involves completing 12 Ironman races and then entering a lottery based on that accomplishment.

But Milian isn’t just interested in his own training. He’s on a permanent mission to recruit others to join him. His 7-year-old daughter has already been inspired by her dad to complete three “IronKid” races. Milian also inspired his brother, Manolo, to take up the sport. Manolo’s first attempt at an Ironman ended in disappointment when he was unable to complete the race under the time limit while being within a mile of the finish. However, the brothers later both finished Ironman Arizona in a day they will always remember.

“You form great bonds of friendship with your training partners,” he said. “That’s one reason I like to recruit friends.”

Milian is the editor of Cal Tri’s newsletter, and he uses that forum to encourage people to give the sport a try. He’s also always eager to recruit his PLNU colleagues to join him in races.

Jim Daichendt, Ed.d, PLNU dean of the College of Arts and Humanities, who is already an experienced triathlete, will likely join Milian at Ironman Santa Rosa this year. Daichendt played football in college and has been involved in triathlon for about 10 years. He’s done many of his races with his father, brother, and brothers-in-law and recently completed a half-Ironman. He’s done several races with Milian already and has committed to several more.

Daichendt, like Milian, enjoys sharing his love for triathlon with others. He was instrumental in inspiring PLNU faculty members Ben Cater, Ph.D., David Carlson, MFA, and Kris Koudelka, Ph.D., to enter their first triathlon as a relay team. Cater, an avid surfer and associate dean of general education was the team’s swimmer. Carlson, chair of the Department of Art and Design and experienced cyclist, did the bike portion, and Koudelka, assistant professor of biology with half-marathon and Spartan race experience, did the run. Though they were novices at triathlon, the trio ended up earning second place in the relay division of the Olympic distance.

“It built our friendship in a more expansive way, being on a team,” Carlson said.

Now all three are planning to complete a sprint distance triathlon (0.25-mile swim, 10-mile bike, and 5K run) as individual athletes in May. When they do, they will be racing alongside Daichendt and Milian, who are both entering as well.

“It’s a fun way to build community,” Daichendt said of doing triathlons with his colleagues. “It’s good to have balance in life.”

The group doesn’t do all their training together – in addition to being faculty, they also all have families at home, so coordinating every workout doesn’t make sense. They do try to motivate each other by using shared workout apps and encouraging each other over text. And they do plan to do some training together when possible. Carlson and Milian, who was once Carlson’s student, are planning to complete a century (100-mile) bike ride in Palm Springs in February, for example. Recently Carlson, Daichendt, Milian, and a few other friends did a 50-mile ride together. Koudelka, who only learned to swim two years ago, is looking forward to getting some stroke and training tips from his friends before the sprint triathlon in May.

“It’s fun to do with other people and to have a built-in community that values a healthy lifestyle,” Carlson said. “I really value the comradery among friends and the fellowship. It’s fun to root each other on.”

You find out things about yourself. Whether it’s that hill that would be so easy to walk and no one would know or setting goals, you feel so much stronger at the end when you do break through and do it.

Daichendt is grateful for the supportiveness of the larger triathlete community and also for the volunteers who work at the races as well as for his colleagues. He enjoys having an athletic and competitive outlet and appreciates the challenge training for triathlon offers.

“You go to some interesting places when you are by yourself,” he said. “It can be meditative, a time to pray and think through things. You find out things about yourself. Whether it’s that hill that would be so easy to walk and no one would know or setting goals, you feel so much stronger at the end when you do break through and do it.”

Cater added: “Before I go swimming, I do devotions and ask myself: why am I doing this? The reason is to be healthy, have fun, and build community. It’s so I can be more faithful in my calling – so that I’m a better faculty member, church member, and colleague. It’s a good goal to shed the ‘dad bod,’ but a better goal is to continue living a good and productive life.”

Milian, Daichendt, Carlson, and Koudelka share a calling to serve students through Christian higher education. Although their exact roles and disciplines vary, that core commitment brought them together at PLNU. Pursuing triathlons together enhances their bond and makes the pursuit of their careers and callings more meaningful and fun. They hope to continue to share their love of swimming, biking, and running with more members of the PLNU community, widening the circle of friends and colleagues who benefit from the mental and physical health benefits of triathlon training.

Photos for this story are courtesy of Cal Tri’s Flickr page.

Related Story: Amber Courtney brings the PLNU community together to help a family in need.