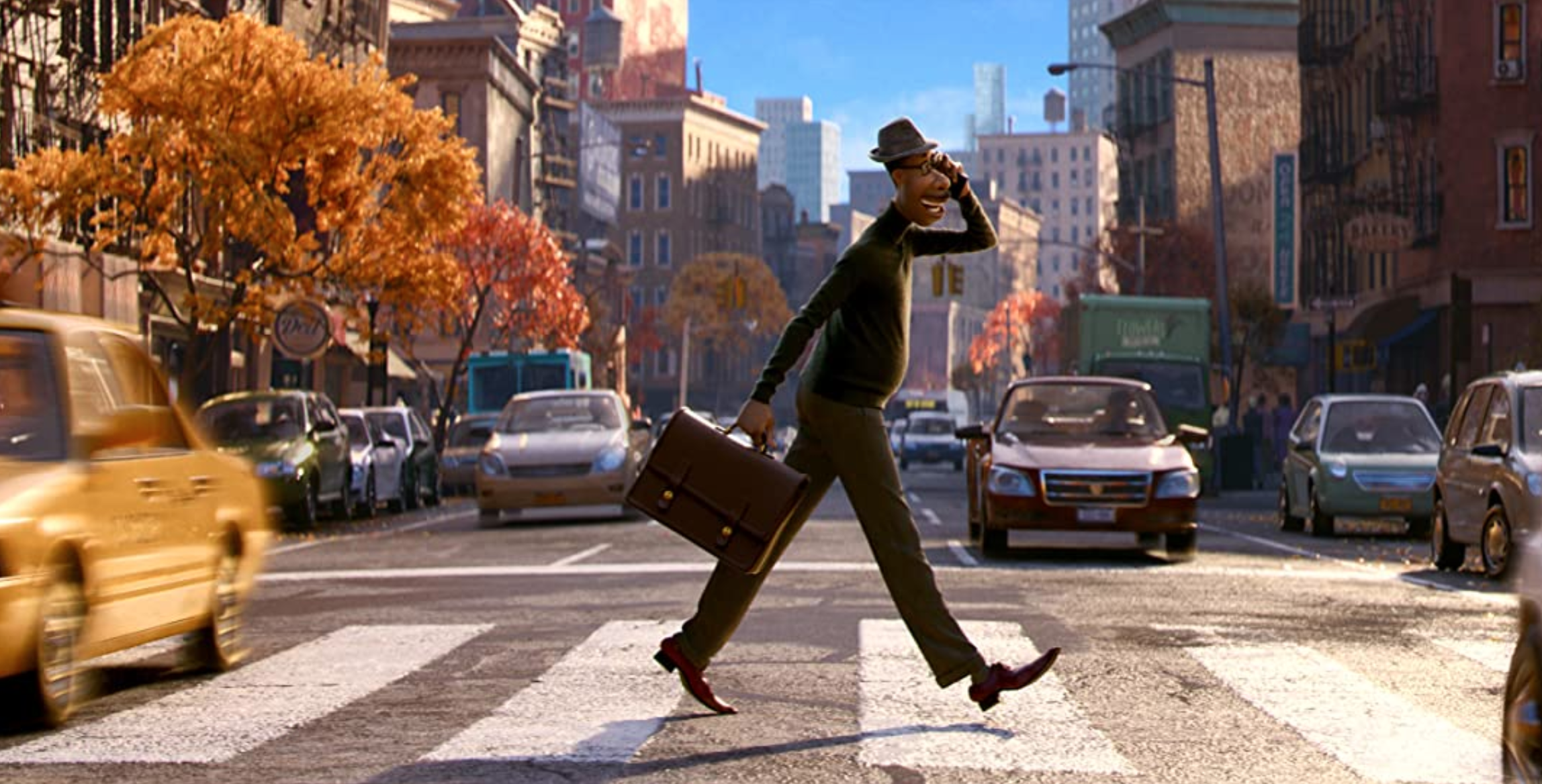 When’s the last time you sat in the wonder of the world around you? When did you last lay on a subway grate and revel in the breeze that flows through you? Or when was it you last caught a helicopter leaf and felt its ridges between your fingertips? Or, simply, looked up to admire the clouds?

I’m a capital-P Planner. StrengthsQuest told me that “Futuristic” was a top-five strength for me, but most of the time, I view it more as a weakness. Sometimes, I get so laser-focused on the plan, the vision, the ultimate goal that I honestly forget to be in the present, and — most importantly — stay aware of my life’s bigger purpose.

Can you relate? I know Joe Gardner from Disney-Pixar’s Soul can. I felt a spiritual connection to Joe, the lead character of the animated film released in December. He wants to be a professional jazz musician more than anything in the world. His heart and soul are set on it, and he truly feels like it is what he was born to do. Joe finds his “spark” after hearing someone play the piano as a kid, and even though we first meet him as a 30-something middle school band teacher, the stage’s bright lights are where we think he is called to be. After Joe gets his once-in-a-lifetime shot to join the band of famous saxophonist Dorothea Willams, he believes that his life’s biggest “what if?” box has been checked.

But, while making a celebratory call sharing the big news, Joe steps in an uncovered sewer hole. The next time we see him, he’s a blueish blob — merely a representation of his soul. I felt a pull at my heart as I watched Joe panic trying to avoid the inevitable — an airport-like moving walkway that leads to Pixar’s version of the afterlife, “The Great Beyond.” He is frustrated because he believes his life was just beginning; in his eyes, he has finally reached his life’s purpose, being a pianist in a famous jazz troupe.

Overall, the film is a commentary on the true meaning of life and how we wrestle with our “why” – masked as a brightly colored kids’ movie. For me, and for Joe, the fast-paced, go-go lifestyle can absorb us and allow us to lose sight of those important questions that keep us on track. In 2020, many of us were forced to take a pause. For some, it allowed space for rethinking our current job or career and if it was feeding into our vocation.

Montague Williams, Ph.D., PLNU’s associate professor of church, culture and society, says that a calling happens in seasons: it’s time-bound; it’s an expression of purpose. What you feel called to pursue right now may change in 30 years. Above all, Williams says that we should stay in constant connection with the One who calls rather than only the calling.

In Genesis 2:15, we get the first human call. God told humanity to tend to the Earth, His creation. When you’re rethinking or questioning what your purpose is, Williams says that reflecting on this passage in Genesis is a great place to begin. “It’s the starting point offered to us in Scripture to reorient our lives around God’s purpose for us,” he says.

“[Genesis 2:15] is the starting point offered to us in Scripture to reorient our lives around God’s purpose for us.”
– Montague Williams, Ph.D.

But what if your vocation isn’t so clear? I know I’ve been there — especially during those college years (and post-grad!) when there was this overwhelming sense that my peers all had this special calling, this predestined vocation, and I was still a little unclear. The character Soul 22 in Soul had the same path. She was stuck in The Great Before because no “spark” resonated with her. After she accidentally experienced Earth inside of Joe’s body, she became fascinated with life itself but didn’t feel like that was good enough. It drove 22 to compare herself to others who used mentors to guide them toward a specific interest and to compare herself to Joe who had music as his love. She felt like a failure, and eventually became a “lost soul,” immersed in this depressive mental state of feeling inadequate.

Williams says that Galatians 6:4-10 points to this message where God tells us not to compare ourselves. “What was provided as valuable around [22], was that assumptions around what mattered didn’t make room for her to see her insight, her interest, her spark as valuable or good,” Williams adds. And now, in the modern Instagram era, that seems to ring true more than ever. “We’ve turned purpose and vocation and calling into ‘What can make you a good amount of money?’ And then how can you use that to be an amazing brand. We’ve all become the Kardashians, like, ‘You’ve got to figure out how to monetize that thing.’ We ended up letting go of sitting in the wonder. And becoming obsessed with the profit.”

22’s child-like wonder gets lost in this messy matter-of-fact mindset with purpose. We’ve become conditioned to believe in this perfectly constructed idea where if we reach our ultimate goals — or get accepted to join a famous jazz band — then our life matters. Through a series of adventures with 22, Joe realizes that the pinnacle of his newly acquired success doesn’t give him the same fulfillment that he had dreamt of. It dawned on him that, regardless of whether he was teaching or performing, life was worth living for its own sake.

Williams explained to me how sometimes we can obsess over the need for a “spark” to guide us when, in reality, a spark doesn’t automatically equate purpose. Neither does a calling. He added that Joe’s second chance at life was powerful and the character’s ultimate reward. “I do think there is something within a Christian life of vocation that says to find life, you must lose it,” Williams says. “To find what really matters, you have to give up the things that you thought mattered most and let it be reframed in this different story, in this bigger picture around the kingdom of God and the beloved community. It wasn’t that he just had to come to terms with the fact that he’s dead. But in doing that — in giving up his life — he truly finds it. I love that.”

Like the year of 2020 we just endured, and the rollercoaster journey Joe experienced, while wrestling with our bigger, capital-P Purpose, Williams suggests you ask yourself some key questions to discern: Who are you a part of? How is God present in your life? What excuses do you hold onto? What complexities of your own story, have you been afraid to explore and unleash? And: If you allow yourself to be fully saturated in God’s love and know that he accepts all of you, how might that change your interactions? How might that change your plans and the risks you take?

But, above them all, we must ask ourselves: What’s the next most faithful step?

At the ending of Soul, Joe — rejuvenated with this new intense sense of life — walks outside, takes a deep breath of fresh air, and takes a step. You should, too.

Related Story: A practical guide to finding a career you love