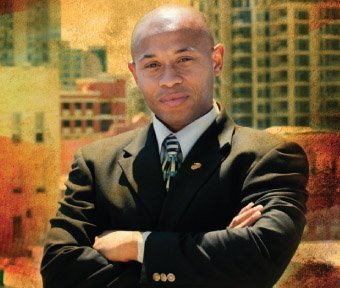 Retired Marine Staff Sgt. Obom Bowen, 34, has big plans. When asked what his dreams are for the future, he has them laid out in five-year increments.

But this last five-year stint hasn’t been so easy.

When he was a teenager, Bowen saw a commercial on TV in which a life-size chess set was at battle. The knight destroyed his competition, a crack of lightning fell, and he was transformed into a uniformed Marine. Bowen was inspired and motivated even before the tagline “The Few. The Proud. The Marines.” faded from the TV set. Bowen enlisted in the Marine Corps at 17.

During 2006, his Humvee was hit by grenades on three separate occasions over a period of four months. On June 17, 2006, a day Bowen remembers vividly, the hit left him with a traumatic brain injury and partial paralysis.

He was granted medical retirement in 2009, and it didn’t take long before he became homeless. Although he recuperated from the paralysis and recovered some of his memories, the complications of his injures took a toll on his work and, ultimately, his marriage. His wife and two daughters moved out, and Bowen couldn’t afford two rent payments. With a divorce pending, shuffling in and out of court, Bowen began living in his car.

He went through treatment at the Department of Veterans Affairs (VA), but his memory loss and constant migraine headaches made work difficult if not impossible.

“I want to be able to perform at the level I was at before, but it’s very frustrating,” said Bowen. “The average person looks at you and thinks there’s nothing wrong with you.”

Bowen represents a new generation of veterans. According to the Department of Veterans Affairs, “About one-third of the adult homeless population has served in the Armed Services.” According to “Veteran Homelessness: A Supplemental Report to the 2009 Annual Homeless Assessment Report to Congress,” an estimated one in every 168 veterans in the U.S. has spent at least one night in an emergency shelter or transitional housing program. By a slew of definitions, many veterans in risky spots cannot technically be considered homeless — couch surfers, those living in poverty, or those in grim living conditions — which means the true number of veterans without stable housing is even higher.

About 1.8 million troops have been deployed during Operation Iraqi Freedom (OIF), Operation Enduring Freedom (OEF) in Afghanistan, and Operation New Dawn (OND) in Iraq. Veterans of these wars are known as OEF/OIF/OND veterans.

Fighting a New Kind of War

OEF/OIF/OND veterans’ military experience is unique compared to the past. They are serving longer and more frequent deployments. And although service members and veterans are bolstered by more support at home and in the Middle East, better technology, and more effective organization, OEF, OIF, and OND are wars with fewer rules.

According to a California Research Bureau report, “There are no traditional front and rear lines in the wars in Iraq and Afghanistan. All service members are exposed to attacks with weapons such as improvised explosive devices (IEDs), mortar attacks, suicide bombs, and rocket-propelled grenades – regardless of their location and assignment.”

“This is the longest held war in American history,” said Laura Owen, OEF/OIF/OND program manager for the VA.

These wars have been called unpredictable, even barbaric. Their long length and repeated deployments take a toll on those who serve, and the challenges they face aren’t necessarily over once they return home.

“Advances in military medicine have increased the rate of survival from battle wounds, and blast injuries have caused a high rate of traumatic brain injury,” according to a report by the RAND Corporation. “As a result, many service members are returning home to cope with serious physical impairments along with the psychological consequences of exposure.”

In fact, 19 percent of returnees report possible traumatic brain injury. Out of those, over half do not seek treatment.

In addition to more serious physical problems, recent veterans also face emotional and psychological issues that are common among people who have experienced extreme stress and trauma. According to the RAND report, almost 20 percent of OEF/OIF/OND returnees report symptoms of post-traumatic stress disorder (PTSD) or major depression. Not knowing what to expect around every corner during combat, many veterans return home hyper-perceptive. A car idling down the street from a veteran’s house can bring crippling anxiety and fear, triggered by memories of unforeseen destruction.

“If the military was your first and only job, and then you experience the traumas of war, perhaps combined with behavioral or mental health concerns, lack of family support, struggles with addiction, and on top of all that you come back to a difficult economy, it can be a recipe for homelessness,” said Owen. She pointed out that veterans, no matter their situation, must learn to adapt to a new way of life after service, something that is inherently challenging for many people.

Knowing veterans come with multiple risks factors, those who work with them are trying to find innovative ways to both prevent and address homelessness in veterans.

The National Coalition for Homeless Veterans notes that community-based, nonprofit, “veterans helping veterans” groups are particularly effective in helping at-risk and homeless veterans. Organizations such as the Wounded Warrior Project aim to provide comprehensive re-integration services for wounded veterans and their families and caregivers. They address mind and body and provide opportunities for economic empowerment and engagement with others in similar situations.

The VA also has a focus on prevention, recently partnering with the Department of Housing and Urban Development (HUD) to launch a pilot program called VASH (Veterans Affairs Supportive Housing). The program helps to identify at-risk-for- homelessness OEF/OIF/OND veterans and get them in housing. The program helps those at risk to get security deposits, first month’s rent, and furniture.

“This generation of OEF/OIF/OND veterans is better at advocating for themselves. They don’t take no for an answer. They’re demanding more of their services, and they’re more active and engaged in their services,” said Owen. “We are taking all of our learned experiences from the past and delivering them to a much more savvy group of veterans.”

Many veterans say the system back home is difficult to navigate, but Owen says this new generation of veterans is coming back to a more prepared system. Veterans of wars like Vietnam have steered clear of the system due to mistrust, lack of information, or myths, she says. But new veterans raised in the Information Age can navigate much of their new civilian lives from a computer.

“They don’t necessarily need to see us to fulfill their needs,” Owen said.

Marsha Latham, a VA social worker, works with veterans of all ages and wars.

“The OEF/OIF/OND program at the VA knows who their veterans are,” said Latham. “They have identified them in the system, so they’re able to flag them, give them a call, and outreach. That program catches them at the front.”

For those who are confused by the system or who are already homeless, more programs and creative services are emerging.

Some, like the project in which PLNU alumna Charisma De Los Reyes (01) participated, are aimed at helping specific sub-populations of veterans.

De Los Reyes, who is earning her MSW from USC, was part of a research team that looked at how to help recently returned female veterans.

Women, who make up 15 percent of U.S. troops, are the fastest growing population of homeless veterans, according to the VA’s Project CHALENG (Community Homelessness Assessment, Local Education and Networking Groups), which collects information about homeless veterans.

While doing outreach and advocacy for female veterans, De Los Reyes and her group contacted Rep. Bob Filner’s office for support. Serendipitously, Filner had been pondering a permanent Stand Down (which means respite from combat in military terminology), a multi-day tent city event that provides care and services for veterans in tough situations.

“[Filner] basically said, ‘If I gave you a floor of a building, what would you do with it?’” said De Los Reyes.

De Los Reyes and her team proposed a one-stop shop for female veterans that, unlike Stand Down, would be open and available year-round. The center would provide access to resources for mental and physical health, housing transition, abuse counseling, and more. The allure of the treatment center would be its gender-specific services and non-affiliation with bureaucracy — something that is intimidating to some veterans, especially women. De Los Reyes says that ease of use is why programs like Stand Down work.

“Stand Down is meeting veterans where they are,” said De Los Reyes, who has observed rising attendance each year at the event. Stand Down, which started in San Diego, has been replicated nationwide.

De Los Reyes and her group’s treatment center idea may be implemented if budgets allow.

“These new veterans are coming from extremely traumatic experiences in combat situations, so we need to provide them with trauma-informed services,” she said.

With numerous service members returning home as the U.S. adapts its strategies in the Middle East, the number of veterans potentially facing homelessness is likely to grow. Fortunately, there is hope. As De Los Reyes demonstrates, those reaching out to meet veterans’ particular needs are initiating more creative and relevant approaches to serving this new generation of veterans.

In April, Bowen qualified for an apartment through Operation Homefront, a nonprofit organization that aims to assist service members and wounded veterans. At the same time, he went through a returning veterans workshop through National Veterans Transition Services, Inc. called Reboot. In the program, Bowen and his classmates learned skills like job interviewing, resume writing, career planning, and navigating the civilian world.

Angus MacDonald, one of Bowen’s workshop facilitators, watched Bowen grow to become a leader in Reboot, noting, “[Obom’s] commitment and integrity are most inspiring and worthy of recognition. What Obom has and continues to do with his life honors God and models a humble but effective discipleship that is absolutely contagious.”

Bowen is one veteran who is making his comeback strong. Now, he is certified to co-facilitate Reboot workshops and is in the process of partnering with them as a contractor. He is also working independently as a consultant helping families and businesses with identity theft protection and legal services. He is fighting hard to get work until he can reach his ultimate goals. He says he is still technically homeless, but his vision is strong. In five years, he sees himself running a nonprofit he’s already named the Global Dream Foundation. In 10 years, he plans on opening a veterans village using many of the same philosophies he learned through Reboot. In the meantime, Bowen is trying to get his story out there – something he knows is beneficial for others and for himself.

“Telling my story is hard,” he admits, “but I know it’s good for me. If I don’t tell it, it lives in my head, and that can be dangerous. I’m now realizing my story needs to be told in order to help others in my same position.”

Giving in Times of Uncertainty

How I Began Confronting my White Family About Racism