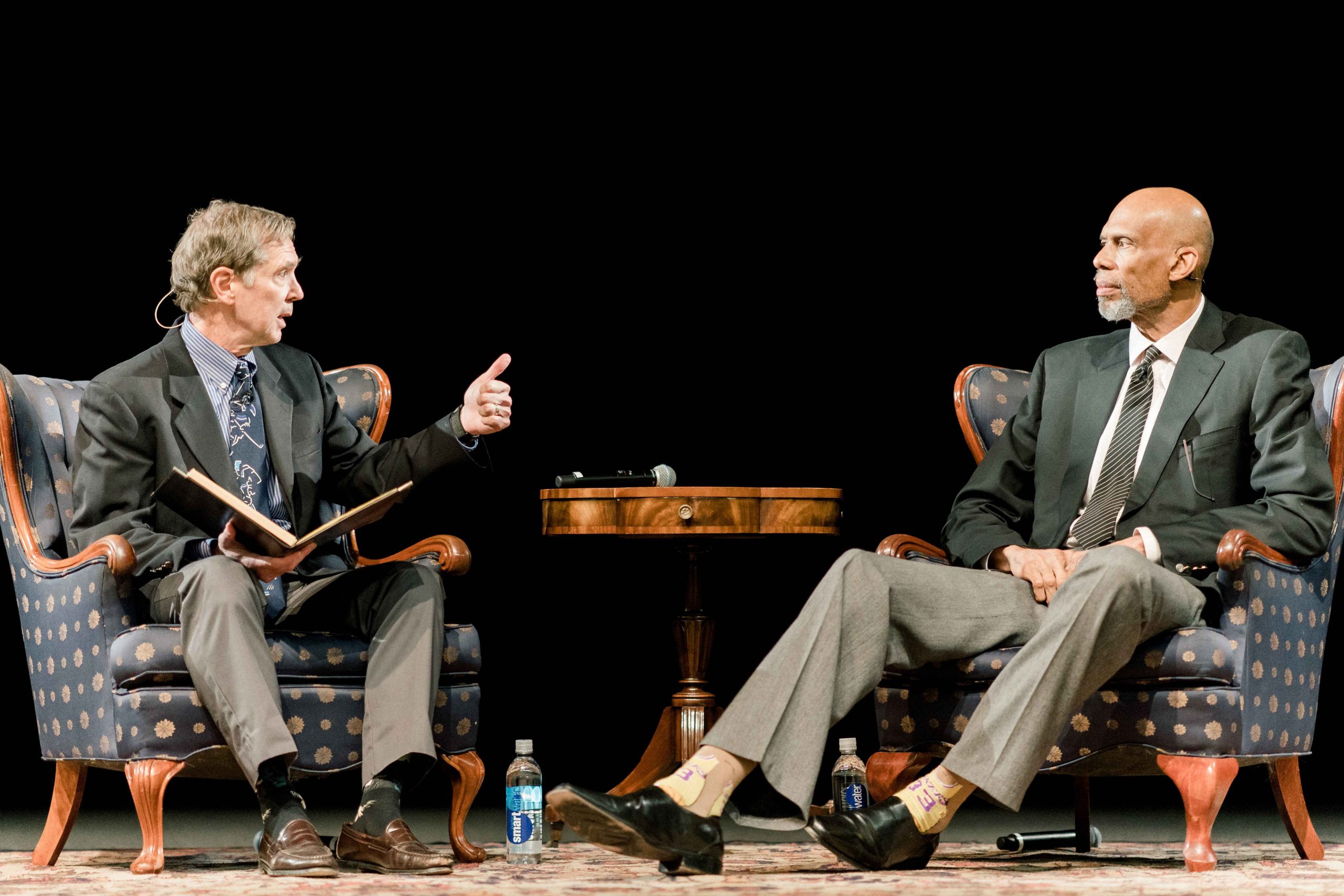 The Writer’s Symposium By The Sea brings in top novelists, essayists, poets, journalists, songwriters, screenwriters and others each year to interact with our students and the broader writing community in Southern California. The purpose is to celebrate, model and inspire great storytelling. Past guests include Ray Bradbury, Anne Lamott, Amy Tan, Garrison Keillor, Jeannette Walls, Kareem Abdul-Jabbar, Krista Tippett, Billy Collins, Philip Yancey, Eugene Peterson, Kathleen Norris, Michael Eric Dyson, Joyce Carol Oates and dozens of others. Dean Nelson, the Symposium host, does evening interviews with most of the writers, which are televised on UC-TV. Those interviews have 4 million views or downloads. This year’s event, Feb. 18-21, will be the Symposium’s 24th year.

When someone asks me, “Have you ever thought of having [fill in the blank] to the Writer’s Symposium?” it’s usually code for “This writer is significant to me personally.”

While the person goes through a list of reasons why the writer would be a good addition to the Symposium stable, I go through my own mental checklist:

So when a prominent cardiologist said to me, over coffee in a local coffee shop a few years ago, “Have you ever thought of having Christian Wiman to the Writer’s Symposium?” I asked why Wiman was significant. Wiman, it turns out, was this doctor’s favorite poet, in part because the poetry articulated some of life’s most fundamental questions about suffering. Note that I did not say the poetry answered the questions about suffering. It articulated them.

Wiman is the former editor of Poetry magazine who now teaches at Yale Divinity School. His experience of growing up in a fundamentalist Christian tradition, his rejection of that form of faith, his return to a deeper, more mysterious Christian faith, his devastating blood cancer that came very close to killing him (or was it the treatments?), his books, such as My Bright Abyss: Meditations of a Modern Believer and He Held Radical Light: The Art of Faith, The Faith of Art, and several collections of poems, made him a contender for the Symposium. Then I heard him speak at a writer’s conference, and I knew the cardiologist was right.

Christian Wiman pulled the audience into a depth and brightness that was breathtaking.

Nnedi Okorafor got on my radar when she started writing the Black Panther series for Marvel Comics. She is also known for writing young adult science fiction and fantasy novels, has won virtually every award in those genres, and is often compared to Ursula Le Guin. The worlds Okorafor creates tap into both her Nigerian roots and her urban-American experience, and then transcend both as she engages in time travel, spirits, danger, love – all while she shows readers how her characters discover who they ultimately are.

Her main characters are strong, young and female, and they tackle contemporary social issues like warriors. George R.R. Martin is developing her novel Who Fears Death into a television series with HBO. The New York Times described her work this way: “Magic, ritual and secrecy are threads that run through Ms. Okorafor’s wildly imaginative young adult fantasy series, which features a head-spinning menagerie of otherworldly spirits and deities drawn from Nigerian myths and legends.”

Okorafor imagines a world where there is SO much more going on than we can experience with our five senses.

E.J. Dionne has been a voice of reason in the journalism world for decades. As a columnist for the Washington Post, his banter with David Brooks of the New York Times each week as they summarize the major news events on NPR, is entertaining, funny, and deep. Dionne, raised Catholic, speaks frequently on the intersection of faith and politics. He is one of the nation’s most influential Washington journalists. Before joining the Washington Post in 1990, he spent 14 years with the New York Times, covering the Vatican, politics, Beirut, Rome, Paris, New York and Washington.

While Dionne’s columns and books (he’s written seven) focus on American politics, they are rooted in the idea that democracy works, civility matters, and citizenship has requirements for responsibility and engagement.

His most recent book is One Nation After Trump: A Guide for the Perplexed, the Disillusioned, the Desperate, and the Not-Yet Deported. Others include Souled Out: Reclaiming Faith & Politics After the Religious Right, and Why Americans Hate Politics.

Dionne imagines a world where people who disagree can do so respectfully and that the tension of disagreement is what drives us to better solutions.

Jody Hassett Sanchez is an award-winning television journalist who now makes documentaries. She was Peter Jennings’ producer at ABC News, covering religion, culture and education, and was the producer of U.S. State Department coverage for CNN before moving into longform storytelling. Her newest film is More Art Upstairs, where she follows four artists vying for the ArtPrize, a populist experiment that gives the public (and not the art world hierarchy) the choice of who gets the $500,000 prize money. It’s an insider’s view of how the art world works, how it could work, and how art helps us understand our own humanity.

Her previous film, SOLD: Fighting the New Global Slave Trade, was broadcast in more than 60 countries, screened on more than a thousand campuses, and included in the State Department’s international cultural affairs program.

In 2009, Sanchez created the Africa Film Project, which supports the next generation of African storytellers who are sparking social change through short documentary films.

Sanchez imagines a world where a well-told story can be the catalyst for change.

And what do I imagine for this year’s Symposium? Since each writer will be interviewed in front of a wildly enthusiastic audience, I imagine that this Symposium will inspire our students and community members. I imagine that we’ll discover something about the writer and about writing that we didn’t know before. I imagine that we’ll have a deeper appreciation for well-told stories and for why they matter. This has happened for the past 24 years we’ve been doing the Symposium.

Our students will have access to these writers and interact with them in personal ways. I imagine our students will be changed by these interactions. As a result, they’ll want to become the culture’s next generation of storytellers, and they’ll commit to doing it well.

I imagine that each of these writers will become significant to each audience member personally.

I imagine that next time we utter the words, “Tell me a story,” we’ll know we’re tapping into a tradition that goes back to the beginning of civilization.

In addition to the interviews, the Symposium will host workshops on Exploding the Myths of Publishing and Writing About War. Details for all events are at www.pointloma.edu/writers

Dean Nelson, Ph.D., is the founder and director of the journalism program, and of the Writer’s Symposium. His newest book is Talk To Me: How to Ask Better Questions, Get Better Answers, and Interview Anyone Like a Pro. This is Nelson’s 15th book. It will be released in February from HarperCollins, see the description and Amazon link here.