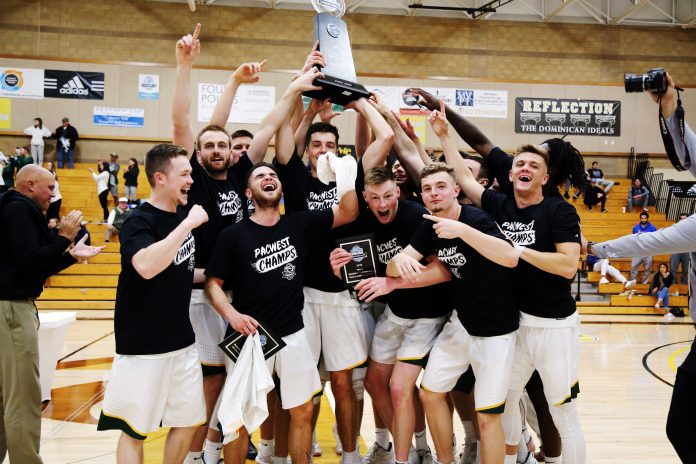 Last week I watched one of my alma maters and former broadcast gigs make history.

My college team, Point Loma Nazarene University, clinched the NCAA Division II West Regional Men’s Basketball Championship and punched their ticket to the Division II Elite Eight in Evansville, Ind. In the Division II world, this is as big as it gets. They open play this week against Queens College from North Carolina.

It’s not the heavily-marketed March Madness that we’re all used to seeing on television, but the NCAA Division II Elite Eight is the final stop for the best eight teams in college basketball’s other division. It was a place Cal State Bakersfield was familiar with during their Division II days. I covered one as a reporter in 2004 when Rabobank Arena in Bakersfield hosted this same championship, won by Kennesaw State, which also, like CSUB, entered the Division I ranks a few years later.

Rightfully so, the camera angle in Point Loma’s win over Saint Martins was from the same broadcast position that yours truly, 20 years ago, started his career. Before internet broadcasts were commonplace, was certainly unheard of as well. I and a few colleagues took to broadcasting men’s and women’s basketball games on our campus radio station. With absolutely zero listeners, apart from those sitting in the campus café listening on the loudspeaker while they probably tried to study, we were doing all of this for practice, just like the athletes we covered.

Point Loma was an NAIA school then, not affiliated with the NCAA as they are today. In 2000, my second year with the team, I was privileged to send the first-ever Point Loma broadcast worldwide via the internet at the NAIA National Tournament. The campus worked hard to set up live streaming and history was made as we took this little college in San Diego to an audience via the web. Today we can each do this from Facebook, but then it was a big deal.

Little did anyone back home know that my gear failed to work from the arena, so I grabbed a cell phone from the sports information director and did the whole thing with a phone jammed in my ear. History doesn’t follow a playbook and is at the discretion of those willing to improvise.

After that, internet audio became a regular thing for our Point Loma broadcasts, and it widened our audience to parents and fans. That’s when I started covering away games as well, driving up and down California to cover the team. Nothing says college broadcaster like an S-10 pickup truck running on hopes and dreams and lacking common sense. Those were the days.

As I watched the live broadcast last week and saw my team, now competing at the NCAA Division II level advance, I felt like I was a part of something, or at least part of starting something that has risen to new levels. The old Golden Gym has been renovated a little, but I can still recall spots on the floor where some of my favorite moments played out, where I took the first steps on what turned out to be a very wild ride. Three years ago, when I stepped into the NCAA Division I Tournament in Oklahoma City, I looked around the massive arena surrounded by national media and fans and said to myself, “You’ve come a long way from Golden Gym.”

I guess Golden Gym has come a long way as well, and the once-small program has grown up a little too, just like the college kid who 20 years ago set out to cover them with the hopes of something big happening in return. I’ve had my chance to make good. Now they’ll have their shot this week, and I’ll be watching the live feed, most likely on a cell phone. Isn’t that both fitting and ironic?

Corey Costelloe (02) has covered NCAA, professional and local sports for more than 20 years as a reporter and broadcaster. A PLNU journalism graduate, he now resides in Tehachapi. He can be reached at corey.costelloe@gmail.com. The opinions expressed are his own.

This story was originally published on the Tehachapi News.

The Journey of Daulton Hommes

The Journey of Daulton Hommes

It’s All Relational | The Legacy of Professor Dan Nelson