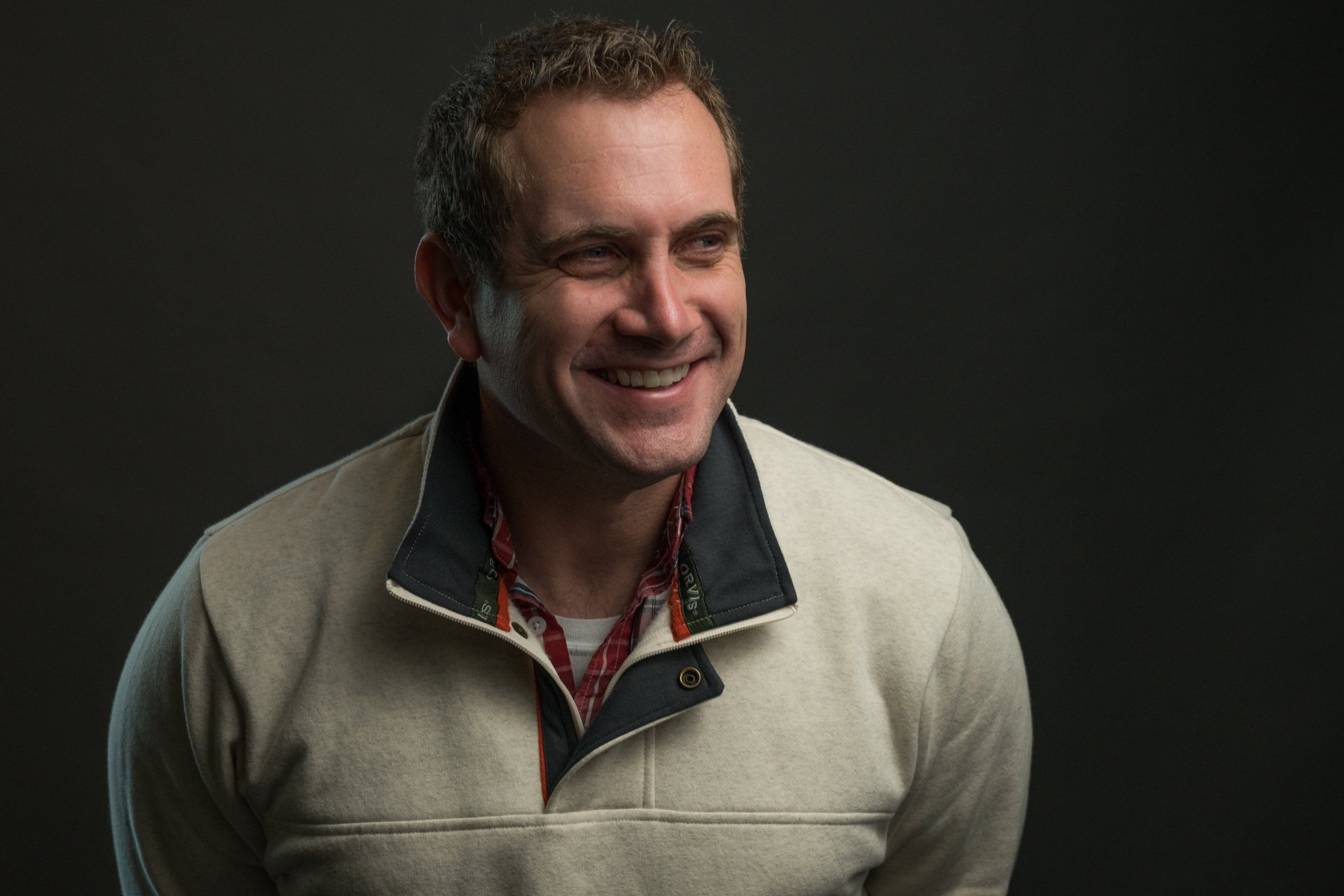 Jason Carter (04) has created an incredible career fueled by a love of computer animation. Since earning his bachelor’s in media communication from PLNU, Carter’s leaned into his interest in film and animation to work for DreamWorks animation as a production coordinator and storyboard artist for titles such as Kung Fu Panda, The Bee Movie, and Shrek Forever After. He moved to Walt Disney Studios as a stereoscopic supervisor for the Planes franchise.

“I’ve had a fun career, and I definitely could not have architected it if I designed it myself,” Carter said.

Carter now works for Microsoft as principal engineering and product lead on Babylon.js, an open-source rendering engine that allows both new and seasoned artists and game developers to create content as simply as possible right from a web browser. Programming can be extremely intimidating to newcomers, but Babylon.js aims to dissolve that intimidation barrier.

“Babylon is a development program you don’t need a degree to use,” Carter said. “It’s visual in nature — there’s an instant gratification to being able to see the tangible result of what you’re doing.”

Moving from animation to running this development tool, Carter is helping young animators and game developers discover the same spark that he found.

Carter said his professional career began when he saw Toy Story for the first time as a young teenager. As the first full-length computer animated film, Toy Story’s amazing innovations hugely inspired Carter. He knew right away he wanted to be a part of computer animation.

“It was an absolute revelation,” Carter said. “I was intoxicated by the blending of technology, art, and storytelling, and after seeing this movie, I knew I had to be within that intersection.”

“I was intoxicated by the blending of technology, art, and storytelling, and after seeing Toy Story, I knew I had to be within that intersection.”

Where he fit into that intersection was initially a mystery to Carter. He set out to study computer science at PLNU since he didn’t feel he had a skill set suited for drawing and art. However, computer science proved to be just as difficult for him.

“I was honestly over my head,” he said. “It was so far down the technical side of things that it was missing a connection to the art and story part.”

Carter cautiously switched to media communications. He talked with faculty in the communications department and explained he wasn’t interested in broadcast journalism or radio — some of the main career tracks the major served. He expressed instead his interest in narrative story development and animated filmmaking. One member of the department, Alan Hueth, Ph.D., became a personal mentor for Carter, and the two co-developed the beginnings of a film curriculum.

“Hueth and I basically shook hands and agreed to spin up a film program within PLNU,” Carter said. “At that time that program didn’t exist, and Dr. Hueth and I were both very passionate about it.”

Carter and Hueth brainstormed a semester-long short film project students would present as a sort of senior thesis.

“We wanted to do it in a manner that was professional,” he said. “Not the quality, per se, but the process and production of how movies were made were as close to professional as possible.”

Carter and his friends ended up creating a short pirate film shot all over San Diego. They even partnered with the San Diego Maritime Museum to shoot on some of their ships. Carter sent the film to a couple of film festivals and his writing and directing impressed a producer for another short film entry who happened to be a production manager at DreamWorks Animation and gave him his first job at DreamWorks.

Carter was overjoyed to be at one of the big animation studios to work on computer animated movies. He had several dream roles while at DreamWorks, starting in production management.

After working briefly on several shows, Carter was placed in the feature division of DreamWorks, where he worked on films such as Flushed Away, Kung Fu Panda, Bee Movie, Shrek Forever After, and Puss in Boots. He slowly moved from production to a department called “final layout” that allowed Carter to get even closer to the creative process through camera animation, scene preparation, and environment creation. Several of those movies were stereoscopic films, created natively as 3D movies.

“I was finally planted right in the middle of that intersection,” he said. “I was an artist coming up with compositions; I was a storyteller in the sense I had to pick camera animations, settings, and angles that complemented the story, and I had to write a few scripts on the technical side to batch-process certain operations.”

He worked at DreamWorks animation for six years and seven months and saw the role as the place he was meant to be.

After having his first child, Carter received an offer from Walt Disney Animation Studios that would allow his family to afford living in Los Angeles relying on only his salary. He joined as a stereoscopic supervisor on the Cars World franchise, which included the Cars movie spin offs Planes and Planes: Fire and Rescue.

Afterward, he felt the technical side of animation was the last piece to which he had always needed more exposure.

“I made the switch to leave the entertainment industry and join the technology industry,” he said.

Because he worked for DreamWorks, Carter’s name was on a very short list of applicants with skill sets that included making stereoscopic movies made natively in 3D. This caught Microsoft’s eye and he was offered a job, first working on the development of HoloLens, a stereoscopic virtual reality headset.

Babylon.js was initially a side project built in a garage but quickly grew and became aligned with Microsoft’s strategies. It slowly started to assemble a team and Babylon’s creator asked Carter to run it — a job Carter says was made for him.

“With Babylon, we want to maintain three core principles,” Carter explained. “We want Babylon to be one of the most powerful, meaning highest performance; and the most beautiful, meaning it can render some of the most cutting-edge graphics possible; while being the simplest tool possible for developers.”

Carter had the passion to know that computer animation was his career’s highest calling. But he also had the courage to admit his shortcomings, try out the different facets of animation, storytelling and technology, and find the perfect fit for himself at every step of his career journey.

Carter explained it’s a fully featured game engine, with cutting-edge features like physics, particles, ray tracing, and real-time lighting. However, what makes Babylon special is that it exists inside of a web browser (like Microsoft Edge, Google Chrome, or Firefox) instead of an external application.

Most website development is conducted using Web GL, a standard interface that all web browsers support that gives access to the graphical processing unit (GPU), so you can render 3D graphics, realistic lighting effects, and more complex and cool-looking visuals. However, this interface is a dense, complex system that is difficult to learn and use. However, Babylon is built on top of Web GL to streamline the process.

“There’s naturally an intimidation and knowledge barrier for the average web developer,” Carter said. “Basically, Babylon was built on top of Web GL, where there’s common, easily-named functions with helpful material so that you only have to write one line of code instead of 30 to get the desired result.”

Babylon is over 10 years old. Just passed the release of Babylon.js 5.0, the most advanced, cutting-edge update yet. Although rendering high-end graphics on a web browser is a newer process with modern standard fidelity, Carter explained that the gap is narrowing.

“We’re very fortunate to be in a time when how far it is from native technology is diminishing very quickly,” Carter said. “We’re a year or months away from cutting edge rather than five to six years behind.”

Just as Babylon is evolving in quality and usability, Carter’s workplace has also become a more user-friendly, inclusive environment. Carter feels like he has a lot to bring to the table, especially because of his experience with communication from his PLNU degree.

One thing Carter appreciates is the level of trust in his workplace. When conversations about the product get too technical for everyone to follow, Carter feels comfortable raising his hand and asking for further explanation. This helps reel everyone back to the same page while reminding everyone of their goal to make programming more accessible.

“It’s valuable to have the confidence to say, ‘I don’t get it,’” Carter said. “Have the courage to be the dumbest person in the room.”

Perhaps this sums up the wonder of Carter’s career as well. He had the passion to know that computer animation was his career’s highest calling. But he also had the courage to admit his shortcomings, try out the different facets of animation, storytelling and technology, and find the perfect fit for himself at every step of his career journey.